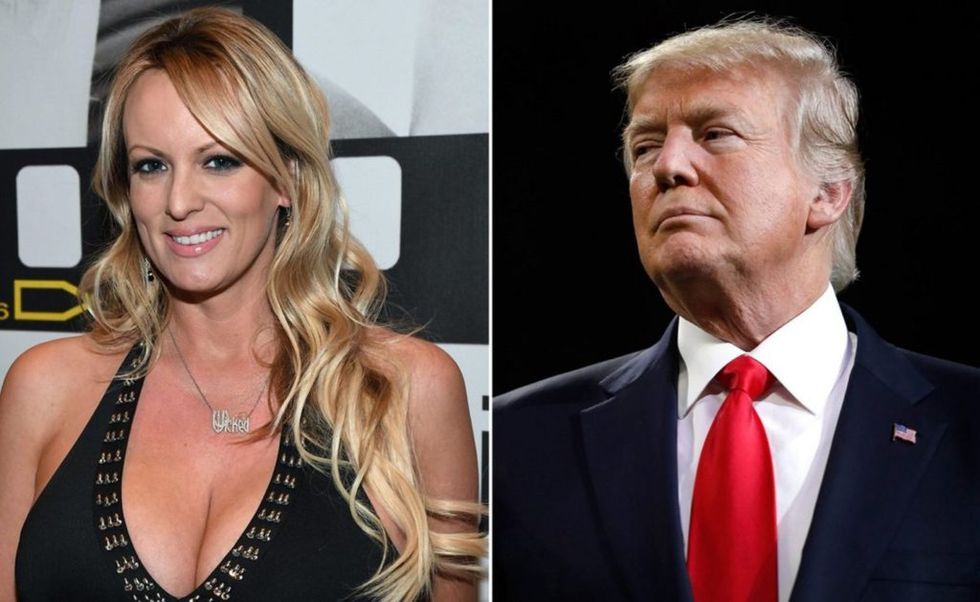 According to a YouGov/The Economist survey, five percent of respondents who voted for President Donald Trump said they would have changed their vote if the Stormy Daniels affair allegations had surfaced the week before the 2016 election.

The respondents said, "Yes, I would have voted differently," according to the survey." Comparatively, 89 percent of Trump voters said they would have still voted for Trump if the allegations had come out before the election. Seven percent said they weren't sure if their vote would have changed at all.

The poll also asked respondents questions like "How important an issue do you think the allegations that Donald Trump had an affair with adult film actress Stormy Daniels are to the nation?"

Had the allegations come out earlier, per this hypothetical universe, a few votes could have potentially swayed the 2016 election. Trump beat his Democratic opponent, Hillary Clinton, by narrow margins in three key states: Pennsylvania, Wisconsin, and Michigan.

Final tallies show that the election came down to 77,744 across those three states. Trump won Pennsylvania by 44,292 votes or 0.7 percent. He won Wisconsin by 22,748 votes, also equivalent to 0.7 percent. And in Michigan, he won by 10,704 votes, equivalent to 0.2 percent of the vote. Had Clinton won those three states she would have won the Electoral College 278 to 260.

The news that Cohen had implicated the president in a scheme to unlawfully silence two women, including Daniels, without whose very public efforts Cohen would likely never have been charged, sent shock waves around the world. Specifically, Cohen said he paid Daniels off “at the direction of the . . . candidate” and “for the principal purpose of influencing the election.”

“How ya like me now?!” she wrote on August 22, the day after Cohen's guilty plea.

It was the moment of vindication Daniels had been waiting for, having suffered through months of having her character impugned and her story discredited.

Cohen had found himself at the center of the questions regarding a payment Daniels received from him as part of the non-disclosure agreement to keep her from discussing a sexual encounter with Trump back in 2006, while he was married to his current wife, Melania, and just a few months after Melania gave birth to their son, Barron.

A separate lawsuit filed by Daniels contends that Cohen initiated a “bogus arbitration” hearing against her without notifying her beforehand, and a copy of the restraining order against Daniels confirms that the judge made a “one-party” ruling that did not require her to be notified.

Cohen previously claimed that he paid Daniels out of his own pocket and that the president never reimbursed him for the settlement. But during a highly publicized 60 Minutes broadcast, Daniels's attorney Michael Avenatti presented documents showing that the payment was sent to Cohen at his Trump Tower location, and communicated through his official Trump Organization email, indicating that he made the payment on Trump’s behalf. Analysts have posited that the exchange of funds could well be an illegal campaign expenditure on Trump’s behalf.

In an interview on “Fox & Friends,” Trump claimed that he knew about payments Cohen made to silence Daniels and and Playboy model Karen McDougal but says that these payments did not come from campaign coffers and thus do not constitute a campaign finance violation.