This Bonkers 'Mueller Investigation By the Numbers' Video Trump Shared Has People Listing All the Numbers That the Video Leaves Out, and It's a Lot 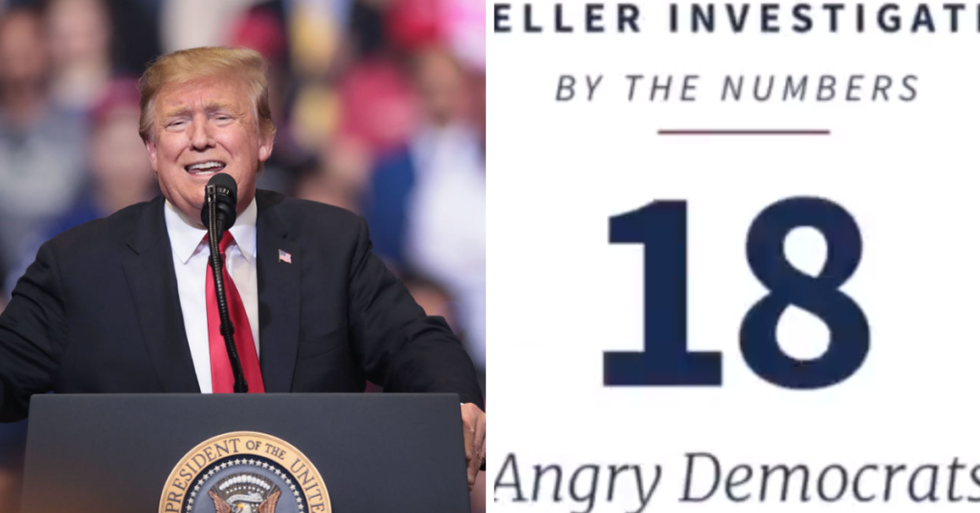 Ignoring the president's jab at "18 Angry Democrats," we conducted a quick fact check.

Mueller's team has released three expenditures statements and says that a statement on expenditures from Oct. 1, 2018, through the end of the investigation will eventually be made public. Direct and indirect costs totaled $25.2 million through Sept. 30, 2018.

"On average, the office spent about $8.4 million per reporting period, which covered about six months. If the final statement tracks with that, total spending from the investigation would reach about $34 million," according to Politifact.

The probe took 675 days from the time it began in 2017 until Mueller submitted his report to the Department of Justice last month. The president's next figure is incorrect. The report itself states that "the Office issued more than 2,800 subpoenas under the auspices of a grand jury sitting in the District of Colombia." The probe did interview 500 witnesses "including almost 80 before a grand jury."

The president's critics replied with numbers of their own, taking him to task for his claim that there was "0 Collusion, 0 Obstruction."

The special counsel and his investigators found insufficient evidence to establish that either Trump or his campaign colluded with the Russians, but it doesn't explain why the president and his associates lied so much:

The President and White House aides initially advanced a pretextual reason to the press and the public for Comey’s termination … The initial reliance on a pretextual justification could support an inference that the President had concerns about providing the real reason for the firing, although the evidence does not resolve whether those concerns were personal, political, or both.

In Volume II of the Mueller report, the special counsel and his investigators examined 10 episodes of the president’s possible obstruction and made it clear that the investigation did not exonerate the president of wrongdoing:

Mueller also concluded that Trump’s public comments could be considered obstruction because he weaponized his authority in attempts to discredit and shut down the probe:

“While it may be more difficult to establish that public-facing acts were motivated by a corrupt intent, the President’s power to influence actions, persons, and the events is enhanced by his unique ability to attract attention through use of mass communications. And no principle of law excludes public acts from the scope of obstruction statutes. If the likely effect of the acts is to intimidate witnesses or alter their testimony, the justice system’s integrity is equally threatened.”

The report cites “the series of events we investigated” that “involved discrete acts”––referring to attempts President Trump made to kill the investigation, such as when he terminated former FBI Director James Comey––ultimately concluding that “it is important to view the President’s pattern of conduct as a whole. That pattern sheds light on the nature of the President’s acts and the inferences that can be drawn about his intent.”

Trump’s “efforts to influence the investigation were mostly unsuccessful, but that is largely because the persons who surrounded the President declined to carry out orders or accede to his requests,” the report says, but that doesn’t shield him from formal charges.

House Judiciary Committee Chairman Jerry Nadler (D-NY) has requested a complete and unredacted copy of the Mueller report by May 1.