Donald Trump Just Unveiled a Questionable New Talking Point in Defense of His Hush Money Payments, and Twitter Is Calling Him Out

No one said they were. 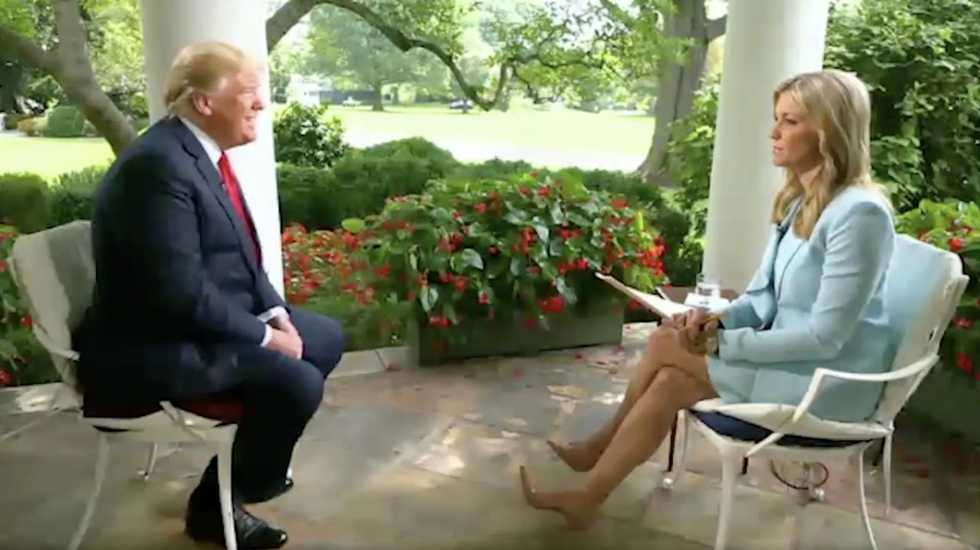 In an interview on "Fox & Friends," President Donald Trump claimed that he knew about payments his former personal attorney and fixer Michael Cohen made to silence adult film actress Stephanie Clifford (better known as Stormy Daniels) and Playboy model Karen McDougal but says that these payments did not come from campaign coffers and thus do not constitute a campaign finance violation.

"Later on I knew, later on," Trump told Fox's Ainsley Earhardt. "But you have to understand Ainsley, what he [Cohen] did, and they weren't taken out of campaign finance. That's a big thing, that's a much bigger thing, "Did they come out of the campaign?" and they didn't come out of the campaign, they came from me, and I tweeted about it. I don't know if you know but I tweeted about the payments."

"Because that could be a little dicey," he added, "and they didn't come out of the campaign and that's big," continuing: "But they weren't––it's not even a campaign violation. If you look at President [Barack] Obama, he had a massive campaign violation, but he had a different attorney general and they viewed it a lot differently."

Trump's statements indicate he misunderstands just why the payments themselves are so important. Speaking under oath to a federal judge yesterday as he pleaded guilty to eight criminal counts––five charges of felony tax evasion, two counts of campaign finance violations, and one count of bank fraud––Cohen said that he made the payments at Trump's behest to influence the election.

In fact, as he pleaded guilty to the campaign finance violations, he said he had paid Clifford and McDougal hush money "in coordination and at the direction of a candidate for federal office... for the principal purpose of influencing the election."

It does not matter whether the money to pay these women came from the campaign or not: That the women were paid off for the explicit purpose of boosting Trump's chances of winning the 2016 presidential election is precisely why the scandal has received so much airtime, even as salacious details of Trump's proclivities during his affairs with both Clifford and McDougal have also nabbed front page headlines.

It was an expectedly weak about-face for a president who once so vehemently denied both having any knowledge of these payments and any suggestion that he and his personal attorney ran afoul of campaign finance laws.

And he was immediately called out.

@foxandfriends @realDonaldTrump @ainsleyearhardt The fact that payments to @StormyDaniels "didn't come out of the c… https://t.co/TifovOOapo
— Brad Heath (@Brad Heath) 1534959765.0

Nor did it escape public notice that Trump had lied from the top of the interview when he claimed he only knew about the payments Cohen made after the fact. Trump can be heard on a tape Cohen released last month discussing paying the two women off.

Fox was also accused of "aiding and abetting" the president.

According to Lanny Davis, who represents Michael Cohen, if Cohen is guilty of campaign finance violations, then the president is too.

"Today he [Cohen] stood up and testified under oath that Donald Trump directed him to commit a crime by making payments to two women for the principal purpose of influencing an election," Davis said yesterday in a statement following Cohen's plea. "If those payments were a crime for Michael Cohen, then why wouldn't they be a crime for Donald Trump?"

Trump's claim that former President Barack Obama is guilty of the same crime as Cohen also doesn't hold up under scrutiny.

The president's claim wasn't just made during the interview. He also tweeted about it earlier today.

Experts say there is no comparison. As NBC notes:

“What Michael Cohen has admitted to doing is absolutely a crime,” said Mitchell Epner, a former federal prosecutor who is now of counsel at Rottenberg Lipman Rich P.C.

Trump referred to a $375,000 fine levied by the Federal Election Commission in early 2013 against Obama's 2008 presidential campaign. The FEC said the Obama campaign missed filing deadlines for disclosing large donations during the final weeks of the campaign, reported the wrong dates on certain contributions, and did not return donations that exceeded the campaign contribution as quickly as they should have.

The violations amounted to "a small, technical paperwork error that people who were trying to get it right might make," Epner said. "$375,000 for the FEC is a meaningful fine, but compared to the amounts that were involved it's tiny."

According to Epner, reoccurring donations can put a donor over the legal limit and campaigns are required to track donation totals and return excess amounts after 60 days. The Obama campaign did not do this in a timely manner, and an FEC audit found some donations which exceeded the legal limit (which were then subsequently refunded). The FEC's conciliation agreement with the campaign notes this.

Eppner says that it's "extremely implausible" that an attorney general could influence the regulation or prosecution of violation of campaign finance laws. Intent and motivation are important factors; the FEC concluded that the Obama campaign did not intend to commit federal crimes.