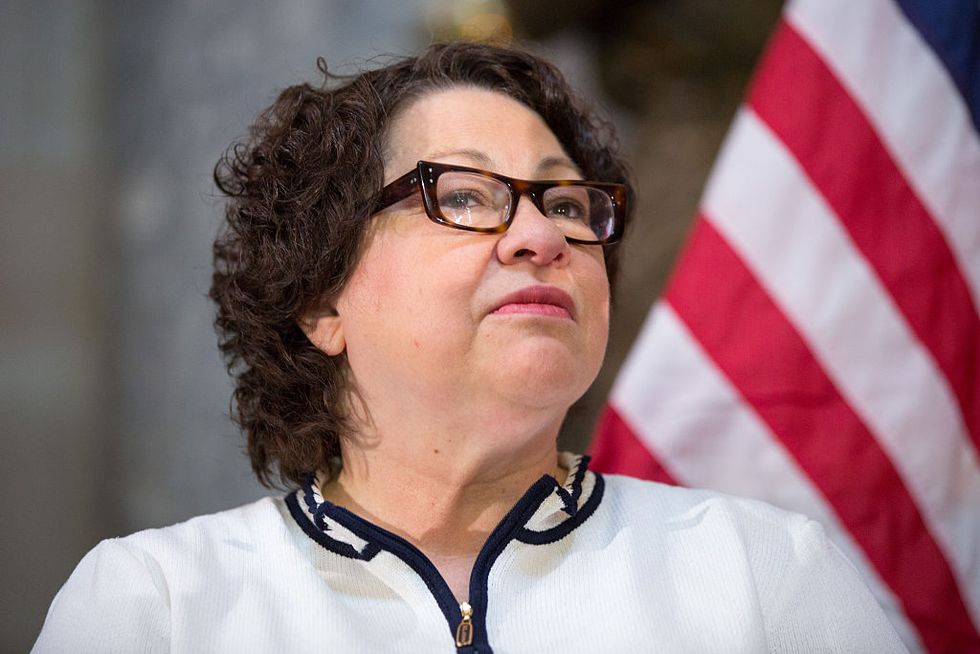 “Today’s holding is all the more troubling given the stark parallels between the reasoning of this case and that of Korematsu v. United States,” Sotomayor wrote in her dissent, joined by Justice Ruth Bader Ginsburg. “Although a majority of the Court in Korematsuwas willing to uphold the Government’s actions based on a barren invocation of national security, dissenting Justices warned of that decision’s harm to our constitutional fabric."

In the intervening years since Korematsu, our Nation has done much to leave its sordid legacy behind. See, e.g., Civil Liberties Act of 1988, 50 U. S. C. App. §4211 et seq. (setting forth remedies to individuals affected by the executive order at issue in Korematsu); Non-Detention Act of 1971, 18 U. S. C. §4001(a) (forbidding the imprisonment or detention by the United States of any citizen absent an Act of Congress). Today, the Court takes the important step of finally overruling Korematsu, denouncing it as “gravely wrong the day it was decided.” Ante, at 38 (citing Korematsu, 323 U. S., at 248 (Jackson, J., dissenting)). This formal repudiation of a shameful precedent is laudable and long overdue. But it does not make the majority’s decision here acceptable or right. By blindly accepting the Government’s misguided invitation to sanction a discriminatory policy motivated by animosity toward a disfavored group, all in the name of a superficial claim of national security, the Court redeploys the same dangerous logic underlying Korematsu and merely replaces one “gravely wrong” decision with another. Ante, at 38.

Our Constitution demands, and our country deserves, a Judiciary willing to hold the coordinate branches to account when they defy our most sacred legal commitments. Because the Court’s decision today has failed in that respect, with profound regret, I dissent.

Ginsburg further concurred with Sotomayor's assessment that the travel ban is not only unconstitutional but was also "motivated by anti-Muslim animus." Sotomayor went so far as to quote tweets directly from the president himself which proclaim that the ban is meant to keep Muslims out of the country. The travel ban, she wrote, "masquerades behind a façade of national-security concerns."

Sotomayor then specifically criticizes the president and her fellow justices, for "ignoring the facts, misconstruing our legal precedent, and turning a blind eye to the pain and suffering the Proclamation inflicts upon countless families and individuals, many of whom are United States citizens."

It leaves undisturbed a policy first advertised openly and unequivocally as a 'total and complete shutdown of Muslims entering the United States' because the policy now masquerades behind a façade of national-security concerns. But this repackaging does little to cleanse Presidential Proclamation No. 9645 of the appearance of discrimination that the President’s words have created. Based on the evidence in the record, a reasonable observer would conclude that the Proclamation was motivated by anti-Muslim animus.

Sotomayor lists specific times the president explained that the travel ban is meant to bar Muslims from entering the country, and explains that the court had a responsibility to decide whether the policy was discriminatory rather than to "denounce" the president's statements:

Moreover, despite several opportunities to do so, President Trump has never disavowed any of his prior statements about Islam. Instead, he has continued to make unrelenting attack on the Muslim religion and its followers. Given President Trump’s failure to correct the reasonable perception of his apparent hostility toward the Islamic faith, it is unsurprising that the President’s lawyers have, at every step in the lower courts, failed in their attempts to launder the Proclamation of its discriminatory taint.

You can read the full Supreme Court decision HERE. Sotomayor's dissent begins on page 65. Her 46-page opinion is five pages longer than the majority opinion.

Many agreed with Sotomayor that the parallels between the two decisions are troubling, with many praising her steadfastness. One observer, The Atlantic's Adam Serwer, likened Sotomayor to former Supreme Court Justice Thurgood Marshall.

Sotomayor's chief adversary on the court's ruling was Chief Justice John Roberts, whose majority decision expresses offense that President's Trump's travel ban is at all similar to Japanese internment.

"Whatever rhetorical advantage the dissent may see in doing so, Korematsuhas nothing to do with this case. The forcible relocation of U. S. citizens to concentration camps, solely and explicitly on the basis of race, is objectively unlawful and outside the scope of Presidential authority," Roberts wrote. “But it is wholly inapt to liken that morally repugnant order to a facially neutral policy denying certain foreign nationals the privilege of admission.”

Roberts continues with the following:

The dissent’s reference to Korematsu ... affords this Court the opportunity to make express what is already obvious: Korematsu was gravely wrong the day it was decided, has been overruled in the court of history, and — to be clear — 'has no place in law under the Constitution.

In the course of ruling for Trump on the travel ban, Justice Roberts overturned Korematsu. What a weird day. What a… https://t.co/ctweJUZJ7f
— Angus Johnston (@Angus Johnston) 1530022976.0

Sotomayor's response: "History will not look kindly on the court's decision today — nor should it."

Justices Stephen Breyer and Elena Kagan did not enter the debate over Korematsu. Today's ruling comes as numerous critics of the Trump administration have invoked the history of Japanese-American internment to condemn the president's "zero tolerance" and family separations policy which have kicked off a humanitarian crisis along the U.S.-Mexico border.