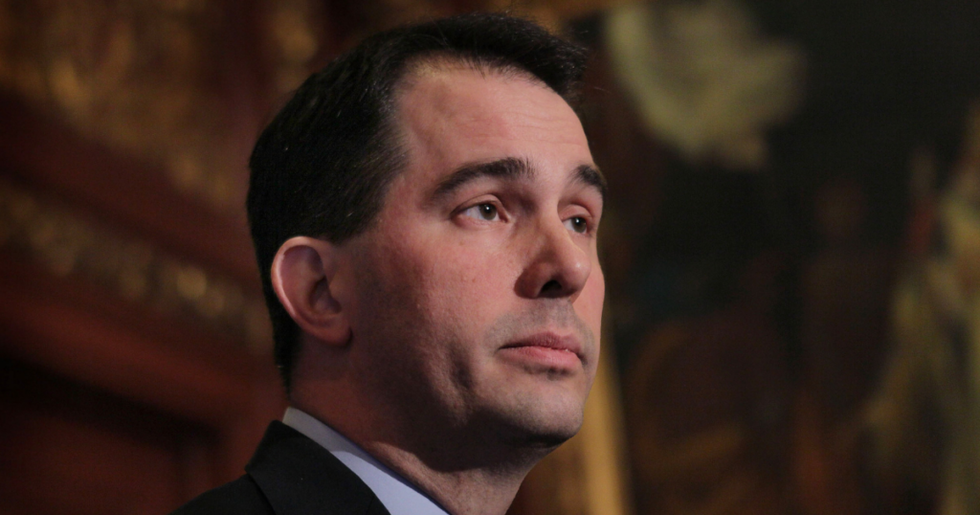 MADISON, WI - FEBRUARY 25: Wisconsin Governor Scott Walker speaks to the press outside his office in the capitol building on February 25, 2011 in Madison, Wisconsin. Demonstrators have occupied the building for the past 11 days protesting the governor's attempt to push through a bill that would restrict collective bargaining for most government workers. Early this morning the state assembly passed the bill. (Photo by Scott Olson/Getty Images)

Walker on Friday signed a bill into law limiting the executive authority of Governor-Elect Tony Evers and Attorney General-Elect Josh Kaul. At the heart of the debacle is a promise Evers made during the campaign that he would withdraw the state from a lawsuit challenging Obamacare.

"The law will limit the governor’s ability to pass administrative rules and block him from killing a provision that would impose a work requirement on Medicaid recipients," Reuters reported. "In addition, the legislation will allow legislators, rather than the attorney general, to decide whether to withdraw the state from lawsuits."

Additionally, some of these powers will be transferred to the Republican-controlled state legislature.

On Friday afternoon, Walker held an event in Green Bay where he claimed that his election four years ago supersedes the results of the midterms in November.

Walker dismissed the opposition as “hype and hysteria."

“The will of the voters four years ago was to elect me to a term that ends January 7th,” Walker said. "So I don’t stop, even though the media treats an election as though that’s the end of a term. It’s not.”

At the event, Walker presented a Venn diagram to better explain why he believes his party is not intentionally subverting democracy but got the entire concept wrong.

Venn diagrams are supposed to have commonalities in the center and differences in the outer bubbles. And based on the legislation that now bears Walker's signature, the graph is simply not true.

He must think Wisconsinites are stupid.

Evers said on Friday that he and the Democratic minority are “reviewing our options," including potential legal action.

“Wisconsinites deserve a government that works for them, and they deserve their officials to be willing to set aside partisanship and political ambitions,” Evers said at a press conference.