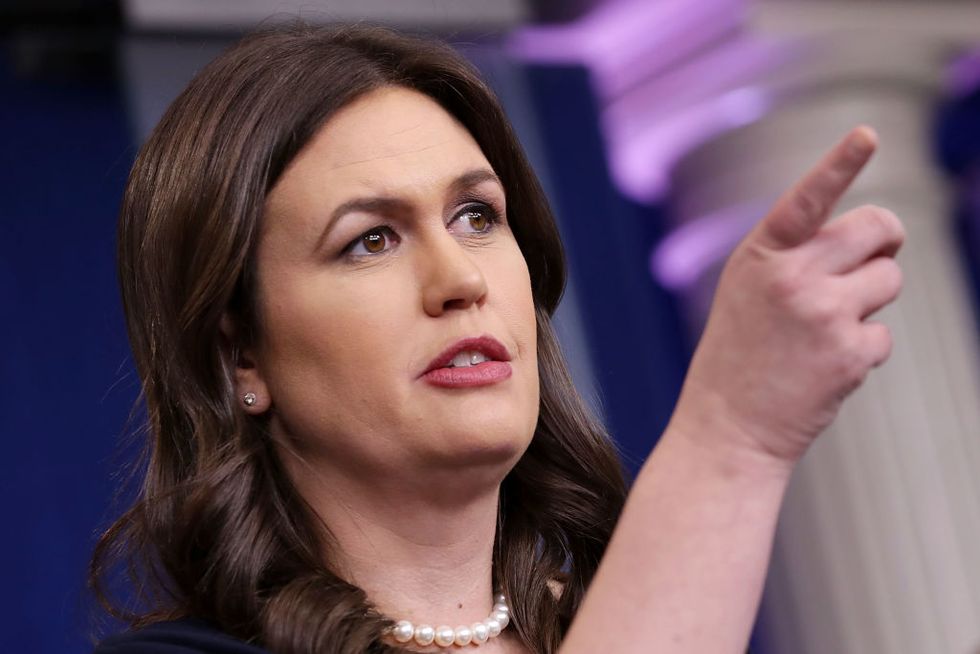 Sanders did not deflect––as she so often does––when asked about the case. Instead, she gave journalists "more lines of inquiry" than ever before.

"This case has already been won in arbitration," she said, before directing further questions to the president's legal team.

When Sanders was asked whether President Trump knew about the payment to Daniels, which Daniels received as part of a nondisclosure agreement to keep her from discussing a sexual encounter with Trump back in 2006, she replied "not that I am aware of," surprising members of the press who've grown accustomed to her explicit denials. She added that the "American people were aware of this, voted for the President."

Sanders gave a similarly uncharacteristic response when asked by CNN's Jeff Zeleny if the president had spoken with Michael Cohen, his personal attorney, since the news of his affair with Daniels became public.

The lawsuit filed by Daniels (whose real name is Stephanie Clifford) contends that Cohen initiated a "bogus arbitration" hearing against her without notifying her beforehand, and a copy of the restraining order against Daniels obtained by CNN confirms that the judge made a "one-party" ruling that did not require her to be notified.

"It was sloppy," said another, who spoke to CNN's Jim Acosta. Another person told Acosta that "they acknowledged something people didn't notice in paperwork yesterday."

From @Acosta: A source close to White House says Trump is upset with @PressSec Sarah Sanders over her handling of S… https://t.co/QUR1xghcYO
— David Wright (@David Wright) 1520514661.0

In an interview on "CBS This Morning" Daniels' new attorney, Michael Avenatti, said that Daniels will "absolutely not" be seeking to profit from her story.

"I don't know whether she's gonna ultimately seek payment or not. What I do know is, she wants the public to know the truth."

“We think it’s highly questionable as to whether it came from his personal funds.” Michael Avenatti, Stormy Daniels… https://t.co/cpG7CWlvyg
— TODAY (@TODAY) 1520427148.0

Despite Mr. Trump's failure to sign the Hush Agreement, Mr. Cohen proceeded to cause $130,000.00 to be wired to the trust account of Ms. Clifford's attorney. He did so even though there was no legal agreement and thus no written nondisclosure agreement whereby Ms. Clifford was restricted from disclosing the truth about Mr. Trump.

Avenatti raised questions about Michael Cohen's tactics as well. The NDA included in the court filing is between "Peggy Peterson" and "David Dennison." "Peterson" is identified as Daniels, while the identity of "Dennison" is redacted. "Dennison" is "most certainly" an alias for Donald Trump, Avenatti notes.

"To conclude otherwise, you would have to conclude that Mr. Cohen, who represented Mr. Trump at the time, who's admitted to the $130,000 payment, made the payment on behalf of some other party, some other individual, that went by that alias," he said.

When asked about the comments Sanders made regarding the arbitration, Avenatti said, "President Trump hasn't won anything relating to Ms. Clifford."

"First of all, it does not appear as if he was even a party to the arbitration Ms. Sanders is referring to. How can you win something you're not even a part of? Secondly, claiming that Mr. Trump 'won' at arbitration when there has been no hearing, no notice to Ms. Clifford, no opportunity given to her to respond and no decision on the merits is completely bogus."

Cohen's lawyer, Lawrence Rosen, disagrees, saying that the settlement agreement had a clause that allowed the LLC "to seek an injunction in the event of a breach or threatened breach of the agreement":

The designated judge from the arbitration tribunal found that Ms. Clifford had violated the agreement and enjoined her from, among other things, filing this lawsuit. We intend to pursue our recourse in the context of the arbitration as agreed to by the parties and continue to categorically refute the claims alleged by Ms. Clifford and her counsel.

Nevertheless, Cohen has continued to come under fire since he told The New York Times that he had paid $130,000 out of his own pocket to Daniels as part of the nondisclosure agreement to keep her from discussing her sexual encounter with Trump back in 2006, while he was married to his current wife, Melania, and just a few months after Melania gave birth to their son, Barron.

“Neither the Trump Organization nor the Trump campaign was a party to the transaction with Ms. Clifford, and neither reimbursed me for the payment, either directly or indirectly,” Cohen said in a statement to Times reporters. “The payment to Ms. Clifford was lawful, and was not a campaign contribution or a campaign expenditure by anyone.”

The entire saga prompted Representative Ted Lieu (D-CA) to question the veracity of Cohen's statements. There are, as he sees it, "Only 2 possibilities," and both of them are felonies.