A big win for environmentalists. 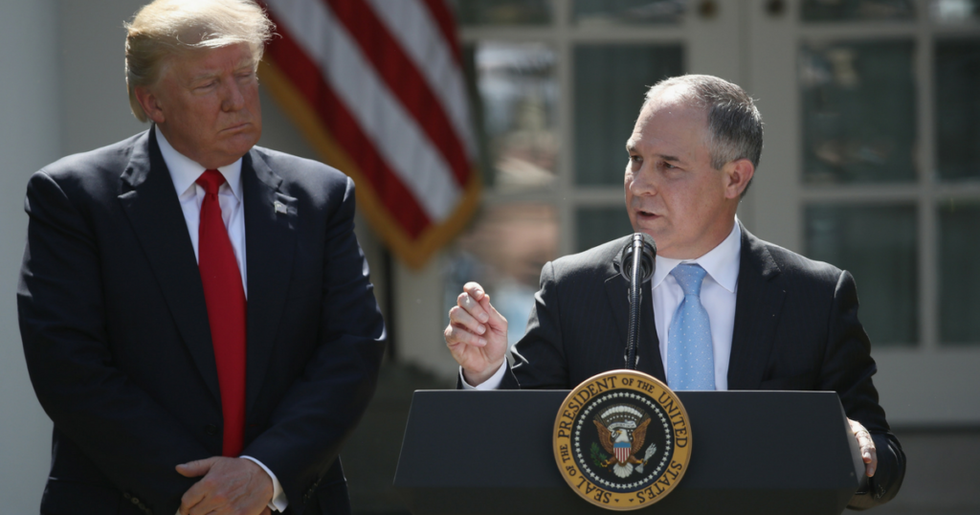 WASHINGTON, DC - JUNE 01: EPA Administrator Scott Pruitt speaks after U.S. President Donald Trump announced his decision to pull the United States out of the Paris climate agreement in the Rose Garden at the White House June 1, 2017 in Washington, DC. Trump pledged on the campaign trail to withdraw from the accord, which former President Barack Obama and the leaders of 194 other countries signed in 2015. The agreement is intended to encourage the reduction of greenhouse gas emissions in an effort to limit global warming to a manageable level. (Photo by Win McNamee/Getty Images)

The United States Court of Appeals for the Ninth Circuit ordered the Environmental Protection Agency to ban a pesticide called chlorpyrifos, which has been linked to brain damage in children.

In March 2017, Pruitt rejected the findings of the E.P.A.'s own scientists, who in 2016 found that children and infants who had been exposed to chlorpyrifos when used as an insecticide in their homes had "measurable volumetric changes in the cerebral cortex."

In its 2-1 decision, the three-judge panel gave the E.P.A. two months to implement the ban.

Judge Jed S. Rakoff of the United States District Court for the Southern District of New York authored the majority opinion, stating that the EPA violated the law saying there was

"no justification for the E.P.A.’s decision in its 2017 order to maintain a tolerance for chlorpyrifos in the face of scientific evidence that its residue on food causes neurodevelopmental damage to children."

The ruling strikes a significant blow to President Donald Trump and former E.P.A. Administrator Scott Pruitt, who resigned last month amid a mountain of growing scandals.

The E.P.A. has not publicly shared how it plans on responding to the ruling.

The court said that in his refusal to ban chlorpyrifos, Pruitt violated the law.

@NBCNews Because the pie hole running the EPA had no fricken clue about what he was doing... just another rich friend of Trumpet
— Jorge Varona (@Jorge Varona) 1533849468.0

"The panel held that there was no justification for the EPA's decision in its 2017 order to maintain a tolerance for chlorpyrifos in the face of scientific evidence that its residue on food causes neurodevelopmental damage to children," Appeals Court Judge Jed S. Rakoff wrote in the majority decision.

DowDuPont, the company that manufactures chlorpyrifos, aggressively lobbied the E.P.A. to keep the substance legal despite overwhelming scientific evidence documenting its harmful effects.

Deficiencies in memory were especially prevalent among the subjects of the Mailman School of Public Health at Columbia University study.

This study reports significant associations of prenatal exposure to a widely used environmental neurotoxicant, at standard use levels, with structural changes in the developing human brain.

In two other studies, the Times noted, "the effects on children included lower birth weight and reduced I.Q., with farmworkers also reporting loss of working memory and other health consequences that at times resulted in hospital admissions."

Pruitt insisted that the scientific data was inconclusive despite decades of research.

"We need to provide regulatory certainty to the thousands of American farms that rely on chlorpyrifos, while still protecting human health and the environment," Mr. Pruitt said in a statement at the time. "By reversing the previous administration’s steps to ban one of the most widely used pesticides in the world, we are returning to using sound science in decision-making — rather than predetermined results."

"Some things are too sacred to play politics with, and our kids top the list," said Erik Olson, senior director of health and food at the NRDC. "The court has made it clear that children's health must come before powerful polluters. This is a victory for parents everywhere who want to feed their kids fruits and veggies without fear it's harming their brains or poisoning communities."

Chlorpyrifos "is used in more than 50 fruit, nut, cereal and vegetable crops including apples, almonds, oranges and broccoli," wrote the New York Times, "with more than 640,000 acres treated in California alone in 2016, the most recent year data is available."