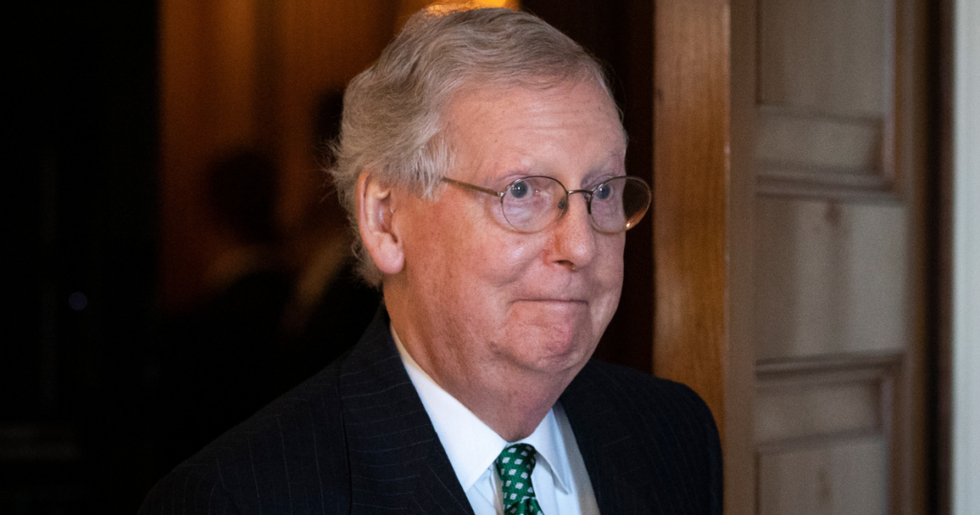 "Last Tuesday I was proud to see that the American people voted keep Republicans in control of the U.S. Senate," McConnell wrote. "But we also learned that, come January, the Republican Senate majority will be dealing with a House of Representatives under Democratic control."

McConnell touted his bipartisan achievements in the Senate, even though Democrats have been in the minority for years.

Republicans did this one their own:

"Both houses of Congress have taken swift action to right-size a bloated federal regulatory state. The Senate has shattered records in confirming the president’s well-qualified judicial nominees, including two outstanding jurists to serve on the Supreme Court."

The following was done without bipartisan support:

"And together, we passed the first comprehensive reform of the nation’s tax code in a generation. Already, Americans’ paychecks are growing, consumer confidence is high and unemployment has reached a near 50-year low."

Twitter didn't take kindly to McConnell's call for unity, as he spent the entirety of Obama's presidency stopping at nothing to block the 44th president's agenda, despite his having been elected in two historic landslides.

McConnell claimed that "the past two years of unified Republican government will be remembered as a period of historic productivity," and that he hopes Democrats will choose to put partisan politics aside for the sake of productive governance.

"So make no mistake, he said. "The Senate has proven its ability to reach bipartisan solutions to some of the most pressing challenges facing our nation."

Why, then, is McConnell refusing to enact legislation to protect Special Counsel Robert Mueller?

The Kentucky Republican, infamous for his historic obstruction and warping of Senate rules under President Barack Obama, swiped at Democrats for daring to deliver to their voters what they had promised - holding President Donald Trump and his corrupt administration accountable.

McConnell famously said that his one goal was to make Obama a "one-term president." He failed, but it set the tone for how the Senate functions for years to come.

Merrick is only one, albeit an important, data point. McConnells outrageous obstruction goes back much further. He… https://t.co/7326d3YYsv
— Norman Ornstein (@Norman Ornstein) 1542157607.0

"That message may have been lost on a few House Democrats, who have made clear their preference for investigations over policy results," McConnell wrote. "After years of rhetoric, it’s hardly news that some are more interested in fanning the flames of division than reaching across the aisle."

"But however Democrats interpret the latest message from voters," the Majority Leader said, "Senate Republicans will continue our commitment to delivering results.

@senatemajldr Good to see your sense of humor is intact. Mine will kick in the day your successor is sworn into the… https://t.co/ppkpvdvOzQ
— Hope Hacks (@Hope Hacks) 1542168302.0

McConnell continued, vowing to put the interests of the middle class first.

McConnell and his Republican majority in the Senate have vowed to cut Social Security and Medicare, which the American people overwhelmingly oppose. And for what? More tax breaks for the wealthiest Americans and large corporations.

Most of the ire, however, was sparked by McConnell's promise to continue to use the Senate to stack the courts with right-wing judges. He famously denied Obama a Supreme Court pick in 2016 after Justice Antonin Scalia died.

Obama nominated Merrick Garland, and McConnell refused to give him a hearing. The seat sat empty for nearly a year. Then, in 2018, Republicans jammed through Brett Kavanaugh to the Supreme Court despite numerous allegations of sexual misconduct from his time in high school and college.

@senatemajldr You do remember what you said about #MerrickGarland don’t you? Surprise! We are actually better tha… https://t.co/tgDzkGmLlc
— P Baird (@P Baird) 1542158487.0

"Most importantly, in the face of whichever tactics the far left chooses to employ next, we’ll continue to stand for the rule of law," McConnell promised. "We’ll continue to confirm more well-qualified nominees to serve on our nation’s courts."

"This is what the Senate’s Republican majority was elected to do, McConnell concluded. "And we’ll continue to get it done."