Michael Cohen Just Explained Where His True Loyalty Lies, and It Sure Sounds Like He's Flipping on Trump 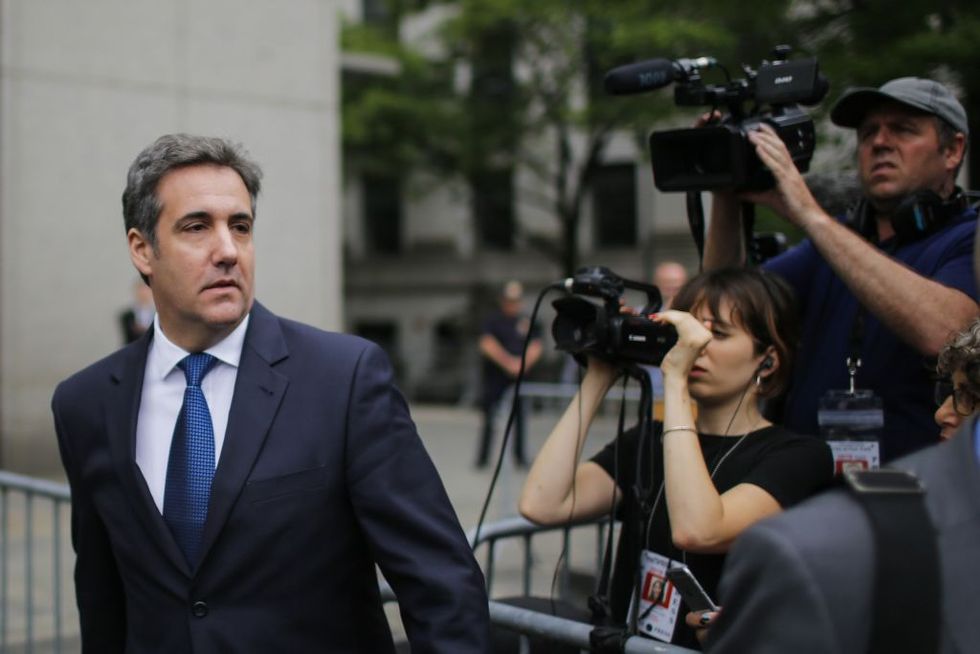 In his first in-depth interview since the FBI’s April raid of his home and office, former Trump attorney Michael Cohen, who once said he would do anything for President Donald Trump, said that he now puts “family and country first.”

“My wife, my daughter and my son have my first loyalty and always will,” Cohen told ABC’s George Stephanopoulos in the off-camera interview that was reported on “Good Morning America.”. "I put family and country first.”

When asked if he was considering cooperating with prosecutors in their probe, Cohen responded that he would defer to Guy Petrillo, his attorney, for advice. Cohen's responses, notably how he didn't repeat past vows to "do anything" for the president, coupled with the fact a joint defense agreement Cohen shared with the president, which allowed their lawyers to share information and documents with each other, would come to an end once Petrillo assumes his role, prompted Stephanopoulos to observe "that the legal interests of the president of the United States and his longtime personal attorney could quickly become adversarial."

Cohen defended himself, too, when asked how he might respond should the president and his legal team attempt to discredit the work he did for Trump over the last decade.

“I will not be a punching bag as part of anyone’s defense strategy,” Cohen said. “I am not a villain of this story, and I will not allow others to try to depict me that way.”

Of Special Counsel Robert Mueller's investigation into Russian interference, Cohen was similarly direct, repeating previous denials that he had any involvement with Russian operatives or their attempts to thwart the 2016 presidential election. He did not, however, criticize Mueller.

"I don't like the term witch hunt," Cohen said. “As an American, I repudiate Russia’s or any other foreign government’s attempt to interfere or meddle in our democratic process, and I would call on all Americans to do the same."

After saying that he had not been interviewed by Mueller's team, Cohen was quoted as saying that he did not agree with a recent tweet from the president repeating Vladimir Putin's claim that Russia did not interfere in the election.

When Stephanopoulos asked Cohen if he had any regrets about how he has handled any matters presently under investigation, Cohen appeared apologetic.

“As an attorney and as an employee, I tried to make good faith judgments in the past. I also acknowledge that I am not perfect. I would prefer not to be in this situation at all, obviously," he said. “I want to regain my name and my reputation and my life back."

Cohen's comments and the knowledge that he is cooperating with Robert Mueller prompted speculation that he might "flip" on the president. (The president, for his part, has been adamant that Cohen would never do this.)

THANK YOU @GStephanopoulos for your incredible reporting and the #BREAKINGNEWS that Michael Cohen is no longer goin… https://t.co/XLcqZXmDGZ
— Debra Messing (@Debra Messing) 1530531931.0

In April, FBI agents raided Cohen’s home, office, and hotel room, seizing business records, emails, and documents. The president claimed that the FBI “broke in to” Cohen’s office without just cause.

Last month, the president, in his annual disclosure of personal finances, revealed for the first time that he paid Cohen between $100,000 and $250,000 last year, as reimbursement for payment to a third-party. The disclosure was made as a footnote in a section on a section outlining the president’s liabilities. (You can read the report HERE.)

The footnote reads as follows:

In the interest of transparency, while not required to be disclosed as ‘reportable liabilities’ on Part 8, in 2016 expenses were incurred by one of Donald J. Trump’s attorneys, Michael Cohen. Mr. Cohen sought reimbursement of those expenses and Mr. Trump fully reimbursed Mr. Cohen in 2017. The category of the value would be $100,001 – $250,000 and the interest rate would be zero.

The disclosure caught the attention of David Apol, the acting head of the Office of Government Ethics (OGE), who sent a letter to Deputy Attorney General Rod Rosenstein in case it is “relevant to any inquiry you may be pursuing.”

Today I certified President Trump’s financial disclosure report signed on May 15, 2018 (for calendar year 2017). OGE has concluded that, based on the information provided as a note to part 8, the payment made to Mr. Cohen is required to be reported as a liability. OGE has determined that the information provided in that note meets the disclosure requirements for a reportable liability under the Ethics in Government Act.

I am providing both reports to you because you may find the disclosure relevant to any inquiry you may be pursuing regarding the President’s prior report that was signed on June 14, 2017.

The disclosure does not specify the nature of the payment made to Cohen, and it was not listed on Trump’s 2017 report, although the disclosure should include current liabilities of $10,000 or more. Rudy Giuliani, another of the president’s attornies, recently told The Washington Post that the president owed Cohen $250,000.