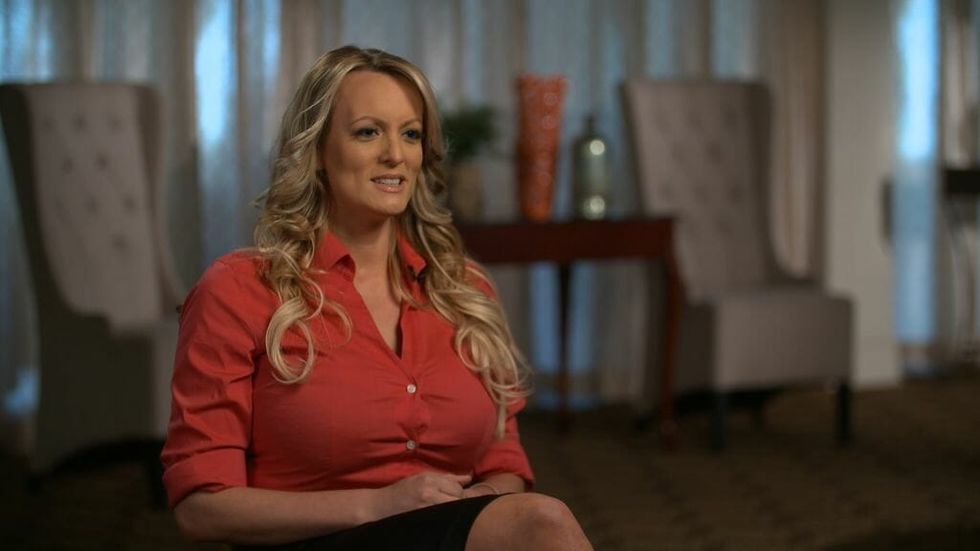 A lawyer for Trump attorney Michael Cohen sent a cease-and-desist letter to adult film actress Stephanie Clifford (aka Stormy Daniels) after her appearance yesterday on 60 Minutes, during which she said she received threats to keep quiet about her affair with Donald Trump.

Clifford recalled she was on her way to a fitness class with her infant daughter in tow when a man stopped her in a Las Vegas parking lot.

"I was in a parking lot, going to a fitness class with my infant daughter. T-- taking, you know, the seats facing backwards in the backseat, diaper bag, you know, gettin' all the stuff out," Clifford told 60 Minutes correspondent Anderson Cooper. "And a guy walked up on me and said to me, 'Leave Trump alone. Forget the story.' And then he leaned around and looked at my daughter and said, "That's a beautiful little girl. It'd be a shame if something happened to her mom." And then he was gone."

Nor did she ever utter Michael Cohen's name.

Clifford's statements, nonetheless, prompted Brent H. Blakely, Cohen's attorney, to write Michael Avenatti, Clifford's attorney, and demand that Clifford apologize for insinuating that his client was behind the threat she received.

"In truth, Mr. Cohen had absolutely nothing whatsoever to do with any such person or incident, and does not even believe that any such person exists, or that such incident ever occurred. You and your client's false statements about Mr. Cohen accuse him of criminal conduct and constitute, among other claims, libel per se and intentional infliction of emotional distress," the letter reads. "It would also appear that your statements of alleged criminal conduct are being made to obtain an advantage in a civil dispute, which is also improper."

I hereby demand that you and your client cease and desist from making any further false and defamatory statements about my client, that you immediately retract and apologize to Mr. Cohen through the national media for your defamatory statements on 60 Minutes, and make clear that you have no facts or evidence whatsoever to support your allegations that my client had anything to do whatsoever with this alleged thug.

Most of what you have been stating to the press, particularly these baseless allegations of criminal conduct, have absolutely nothing to do with the underlying contract dispute between Ms. Daniels and Essential Consultants LLC. Moving forward I would ask that you refrain from any further false accusations and litigate this case in court on the actual merits.

A copy of this correspondence is provided below:

Cohen has found himself at the center of the questions regarding a payment Clifford received from him as part of the non-disclosure agreement to keep her from discussing a sexual encounter with Trump back in 2006, while he was married to his current wife, Melania, and just a few months after Melania gave birth to their son, Barron. A lawsuit filed by Clifford contends that Cohen initiated a “bogus arbitration” hearing against her without notifying her beforehand, and a copy of the restraining order against Clifford confirms that the judge made a “one-party” ruling that did not require her to be notified.

The White House, for its part, continues to deny that President Trump ever had an affair with Clifford, per White House Deputy Press Secretary Raj Shah.

"The President strongly, clearly, and insistently has denied these underlying claims. The only one being inconsistent is the one making the claims," Shah said, adding that the president "doesn't believe that any of the claims Ms. Daniels made in the interview are accurate."

Shah also brushed aside questions from the press about a $130,000 hush agreement struck days before the 2016 presidential election between Clifford and Cohen. though he did address inquiries as to why the president was allegedly involved in the settlement payment if he insists the affair never took place. To this, he said that "false charges are settled out of court all the time" and directed reporters to "ask Michael Cohen about the specifics."

Analysts posit that Cohen might be facing significant legal jeopardy––and that his actions place Trump prominently in the crossfire. According to Trevor Potter, a former Federal Election Commission (FEC) chairman who was also interviewed during the 60 Minutes segment, the exchange of funds could well be an illegal campaign expenditure on Trump’s behalf:

The payment of the money just creates an enormous legal mess for I think Trump, for Cohen and anyone else who was involved in this in the campaign. ... It's a $130,000 in-kind contribution by Cohen to the Trump campaign, which is about $126,500 above what he's allowed to give. And if he does this on behalf of his client, the candidate, that is a coordinated, illegal, in-kind contribution by Cohen for the purpose of influencing the election, of benefiting the candidate by keeping this secret.

Potter also explained what the legal implications would be if the president paid Cohen back the $130,000 after Anderson Cooper asked him if paying Cohen back is "an in-kind campaign contribution that the president should've then reported." To that end, Potter said, "It is. If he was then reimbursed by the president, that doesn't remove the fact that the initial payment violated Cohen's contribution limits. I guess it mitigates it if he's paid back by the candidate because the candidate could have paid for it without limit."

Cohen has claimed that he paid Clifford out of his own pocket, and that the president never reimbursed him for the settlement. But during last night's broadcast, Michael Avenatti, Clifford's attorney, presented documents showing that the payment was sent to Cohen at his Trump Tower location, and communicated through his official Trump Organization email, indicating that he made the payment on Trump's behalf.

Shortly after Second Nexus published this story, we received a breaking news bulletin that Stephanie Clifford has filed a lawsuit for defamation against Michael Cohen after his attorney sent the cease-and-desist letter. More as this story develops.