As Support for Expanding the Supreme Court to More Than Nine Justices Builds, a Republican Congressman Just Unveiled His Plan to Shut That Down 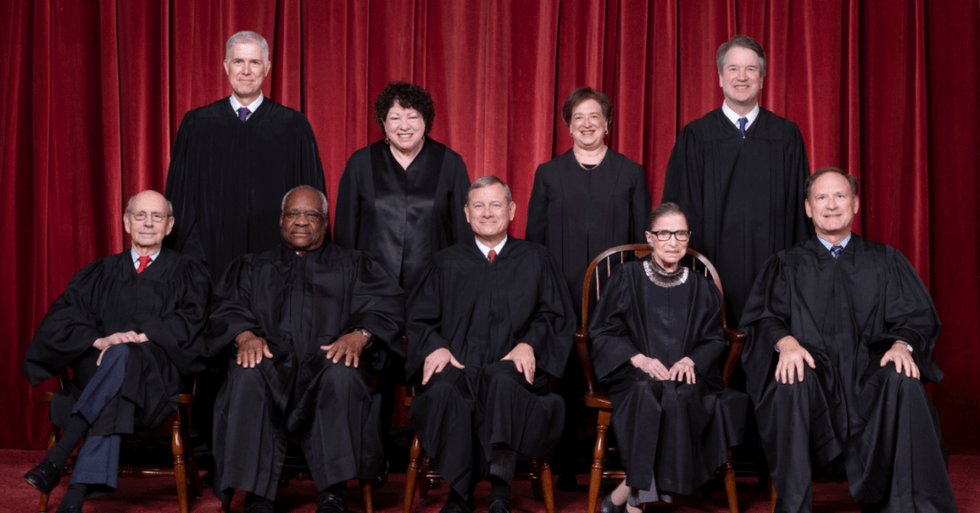 Representative Mark Green (R-TN) has introduced a constitutional amendment that would limit the number of Supreme Court seats to nine. The move comes as several prospective Democratic candidates have said they would consider expanding the number of justices on the nation's highest court.

“The temptation to create a Court of super-legislators must be resisted,” Green said in a statement. “Limiting the number of seats to the nine we have currently would help ensure the U.S. Supreme Court remain an impartial branch beholden to the Constitution and no political party.”

Schemes to ‘court pack’ thwart the Founders’ intent to create an independent and impartial judiciary that serves as a check on both the Executive and Legislative branches of government. Democrats’ belief that the sitting originalist, Constitutionalist justices are partisan or beholden to GOP interests reveal something disturbing about their judicial philosophy. They want liberal, activist justices who will pass rulings that conform to their dystopian, socialist agenda.”

Democratic Senators Elizabeth Warren (MA) and Kamala Harris (CA) are among the presidential candidates who've suggested an expansion of the court. Senator Kirsten Gillibrand (NY) said the idea is an "interesting" one but that she would “need to think more about it.” South Bend, Indiana Mayor Pete Buttigieg and Representative Beto O'Rourke (TX) have both suggested allowing Republicans and Democrats to appoint five justices each. The 10 justices would then appoint five more justices, bringing the total number of seats on the bench to 15.

There is no law or amendment on record that says the Supreme Court can't have more members. Proponents of such a change say that the idea makes sense given how medical advancements have extended the average lifespan.

Green was immediately criticized. As some people noted, Green was among Republicans who supported blocking former President Barack Obama's nomination of Merrick Garland to the bench.

@RepMarkGreen "The Supreme Court must remain a fair and impartial branch of government not beholden to party." Were… https://t.co/maZ1wyMNoo
— Ryan Smith (@Ryan Smith) 1553029419.0

@RepMarkGreen How about a law that installs Merrick Garland to the Supreme Court instead? Since you know, it was th… https://t.co/6H9wTFQMDQ
— Onion Knight (@Onion Knight) 1553025786.0

Senator Marco Rubio has backed Green's proposal and introduced a measure of his own in the Senate.

"[The] Left has used courts to achieve what they could not get done through Congress or the Presidency," Rubio wrote.

Left has used courts to achieve what they could not get done through Congress or the Presidency. Now that @POTUS ha… https://t.co/NOIE4MnBpZ
— Marco Rubio (@Marco Rubio) 1553168741.0

Concerns about the integrity of the nation's highest court have proliferated since Senate Majority Leader Mitch McConnell infamously refused to hold hearings for Merrick Garland. At the time, McConnell claimed that the Senate should not confirm Supreme Court nominees during an election year, though he could cite no rules to support this assertion, and accusations that his decision was informed, at least in part, by racial animus toward Obama have dogged him ever since.

Despite this, McConnell did nothing to block President Donald Trump's nominations of Neil Gorsuch and Brett Kavanaugh, both of whom have since been confirmed.

In widely derided remarks shortly after the 2018 midterm elections, McConnell, in a Fox News op-ed, issued a call for bipartisanship.

“Last Tuesday I was proud to see that the American people voted [to] keep Republicans in control of the U.S. Senate. But we also learned that, come January, the Republican Senate majority will be dealing with a House of Representatives under Democratic control,” McConnell wrote before touting his bipartisan achievements in the Senate. He claimed that “the past two years of unified Republican government will be remembered as a period of historic productivity."

On Tuesday, President Trump said the move to expand the court is a politically motivated one, characterized as payback for the successful confirmations of Gorsuch and Kavanaugh.

“I wouldn’t entertain that. The only reason that they’re doing that is they want to try and catch up, so if they can’t catch up through the ballot box by winning an election, they want to try doing it in a different way," he said.