The Republican Party Just Bragged About Their Effort to Ensure Cindy Hyde-Smith Won Her Senate Run-Off in Mississippi, and Twitter Made Them Regret It 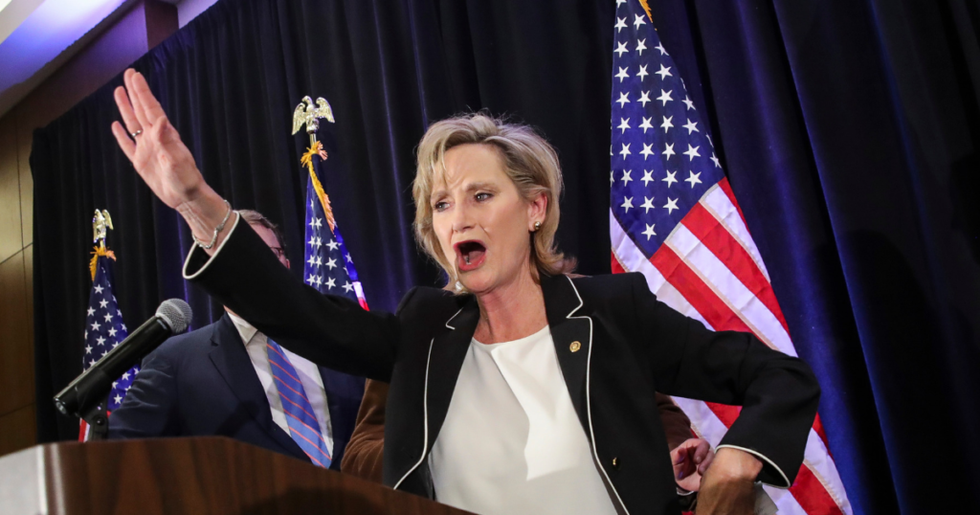 The Republican National Committee crowed on Twitter Wednesday night about how much support it dropped onto Cindy Hyde-Smith, who won Mississippi's U.S. Senate seat in Tuesday's runoff election.

Hyde-Smith was appointed to the U.S. Senate after Thad Cochran retired in April and defeated Democrat Mike Espy to become Mississippi's first elected female Senator. The election on Tuesday solidified her position until the end of Cochran's original term in 2020.

"We went ALL IN for @cindyhydesmith in Mississippi by: -Outspending Democrats 3-to-1 -Recording 2.2 million voter contacts in a state with just 2.9 million residents -Sending 1.5 million text messages and 500,000 direct mail letters to voters."

President Donald Trump, who vigorously campaigned on behalf of the GOP for Hyde-Smith, congratulated her in a tweet following her victory.

"Congratulations to Senator Cindy Hyde-Smith on your big WIN in the Great State of Mississippi," lauded Trump."We are all very proud of you!"

Congratulations to Senator Cindy Hyde-Smith on your big WIN in the Great State of Mississippi. We are all very proud of you!
— Donald J. Trump (@Donald J. Trump) 1543376528.0

Is there really much to be proud of besides merely winning? I mean, it is Mississippi - one of the reddest, and poorest, states in the union.

The contest was marred by unapologetic lynching jokes and pro-Confederate musings by Hyde-Smith. Espy, a former four-term U.S. Congressman and Agriculture Secretary, is black.

Mississippi went for Trump in 2016 by an 18-point margin. He received 58 percent of the vote to Clinton's 40 percent. Espy was able to substantially chip away at the inherent Republican advantage.

Hyde-Smith won by an unremarkable seven points. Espy impressively earned a higher share of the vote than Hillary Clinton and Barack Obama in their respective presidential campaigns.

Thus, Twitter users pummelled the RNC for boasting over the number of resources it was forced to pour into the race.

@GOP @cindyhydesmith The fact that you had to outspend Democrats 3-1 in a state like Mississippi should make you nervous not proud, dummies.
— Seton (@Seton) 1543458849.0

@GOP @cindyhydesmith The fact that you had to outspend Democrats 3-1 in a state like Mississippi should make you nervous not proud, dummies.
— Seton (@Seton) 1543458849.0

@GOP @cindyhydesmith You honestly should not have to outspend the Democrats 3-1 in a historically red state... just… https://t.co/zsyrK3w8Se
— Julaine Nickels (@Julaine Nickels) 1543459919.0

Social media was not going to let Republicans off the hook for backing Hyde-Smith.

They have a point.

@GOP @cindyhydesmith It’s super hilarious that you’re bragging about how much work and money you had to put in to g… https://t.co/aEbfFHp2UD
— Christie (@Christie) 1543509640.0

@GOP @cindyhydesmith Money made out of TREES of green, Tied in KKKnots around Americas throats🙄 #MoronsAreGoverningAmerica
— Ipsy (@Ipsy) 1543509870.0

Hyde-Smith's win gives Republicans a 53-47 majority in the Senate.