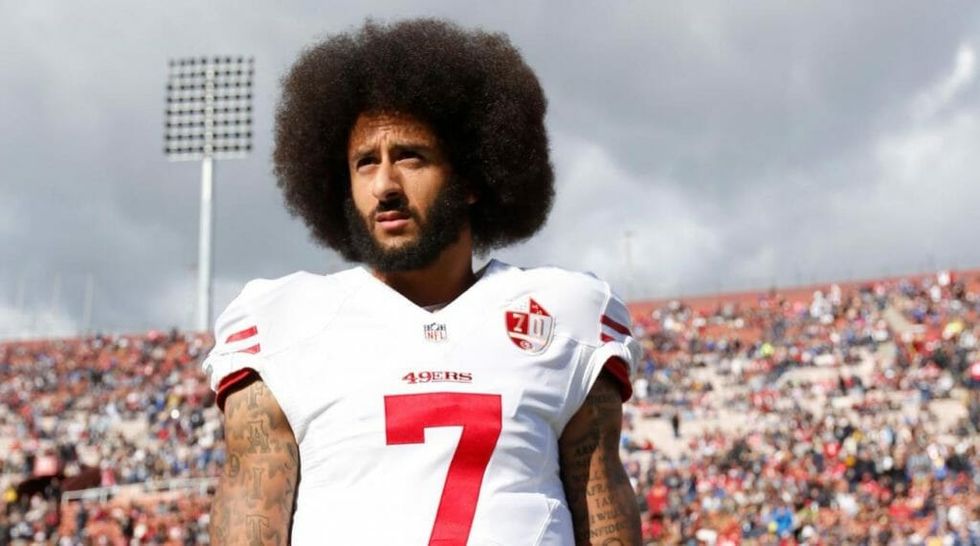 Former San Francisco 49ers quarterback Colin Kaepernick, who last season sparked a conversation on systemic racism by kneeling during the playing of the national anthem, has filed a grievance with the NFL for collusion to keep him out of the league, according to his attorney, Mark Geragos. The filing, which will be heard by an arbitrator under the terms of the labor agreement between the union and the league, says the NFL and its owners "have colluded to deprive Mr. Kaepernick of employment rights in retaliation for Mr. Kaepernick's leadership and advocacy for equality and social justice and his bringing awareness to peculiar institutions still undermining racial equality in the United States."

Geragos released the following statement, which also called out President Donald Trump, who issued condemnations of Kaepernick's protest (and smaller sideline protests) in recent weeks via his Twitter account:

If the NFL (as well as all professional sports teams) is to remain a meritocracy, then principled and peaceful protest -- which the owners themselves made great theater imitating weeks ago -- should not be punished and athletes should not be denied employment based on partisan political provocation by the Executive Branch of our government. Such a precedent threatens all patriotic Americans and harkens back to our darkest days as a nation. Protecting all athletes from such collusive conduct is what compelled Mr. Kaepernick to file his grievance.

Colin Kaepernick's goal has always been, and remains, to simply be treated fairly by the league he performed at the highest level for and to return to the football playing field.

The league declined to comment on Kaepernick's claim. According to the collective bargaining agreement between the union and the league, Kaepernick must prove the teams actively conspired to keep him off the field rather than merely declined to sign him.

In an email to The New York Times, Mark Conrad, an associate professor of law and ethics at Fordham University, notes: “An inference that he was not signed — even arguable if ‘worse’ players were — is not going to be enough. Many remember the baseball collusion cases of the 1980s, but in those cases, there was some clear evidence of attempts to limit signings of free agents. Here, Kaepernick’s attorneys will have to show that kind of evidence — conversations, emails, notes.”

San Francisco safety Eric Reid, who has kneeled during the anthem before games, expressed his support for Kaepernick. "I'll have to follow up with him,'' Reid said. "It sure does seem like he's being blackballed. I think all the stats prove that he's an NFL-worthy quarterback. So that's his choice, and I support his decision. We'll just have to see what comes of it.''