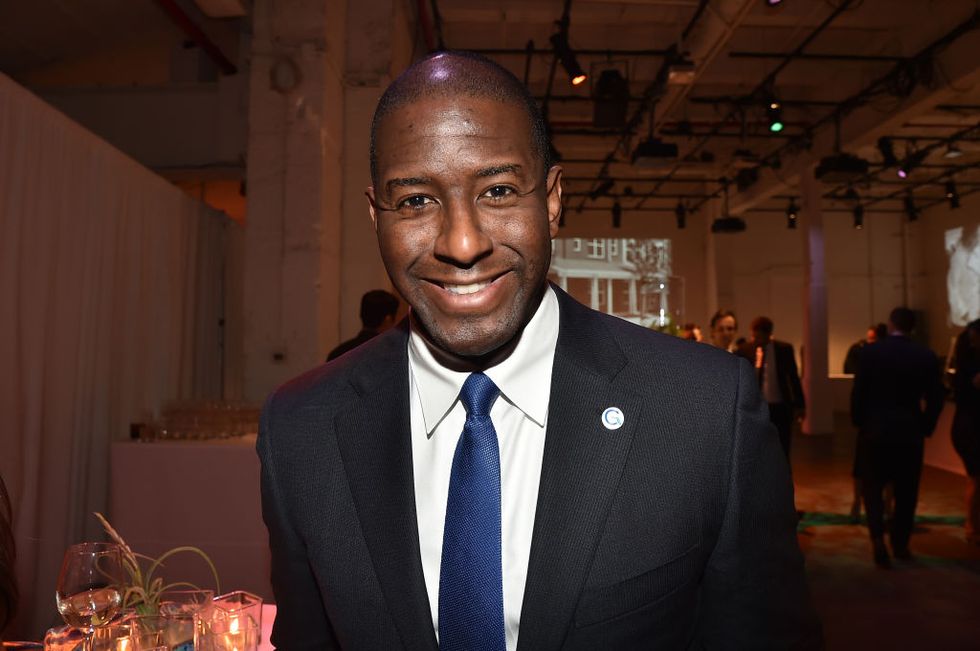 President Donald Trump has made it clear, however, that he's thrown his support behind Republican primary winner Ron DeSantis, and he used his Twitter platform to brand Gillum a "failed Socialist Mayor" who "has allowed crime & many other problems to flourish in his city."

Not only did Congressman Ron DeSantis easily win the Republican Primary, but his opponent in November is his bigges… https://t.co/97naDf5NIB
— Donald J. Trump (@Donald J. Trump) 1535544037.0

Then Gillum––who has never claimed to be anything other than a Democrat but has, as The Tampa Bay Times points out, "embraced the rising progressive wing" of his party––fired back, and his response made it clear that he views the president as the antithesis of what he hopes to achieve should he win this year's gubernatorial election.

"What our state and country needs is decency, hope, and leadership," he wrote, before taking a jab at the president.

@AndrewGillum @realDonaldTrump lmao. If FL didn't want Gillum, we wouldn't have voted for him. Congrats, sir, and I… https://t.co/YFFNfGakn0
— Azalea Forrest (@Azalea Forrest) 1535544936.0

Another person noted that, contrary to Trump's accusation, crime rates in Tallahassee have actually been reduced.

Gillum did, earlier this year, seek a state of emergency and aimed to shift power to the county sheriff, but that proposal was "rejected."

In May, WCTV noted that:

According to the Florida Department of Law Enforcement’s Annual Crime Report, both Tallahassee and Leon County saw significant drops in crime during 2017.

Although there has been a decrease in crime, Leon County still stands as the Florida county with the highest crime rate per 100,000 people, with a rate of 4,802.4 for 2017. However, the FBI has warned readers not to make comparisons between the varying counties because of outside factors that affect the numbers, like a high student population.

Earlier this morning, when asked if he's "scared" of Trump's role in the election, Gillum was adamant that "Trump and Ron DeSantis are both scraping from the bottom of the barrel."

Gillum's victory over former Representative Gwen Graham in Miami-Dade and Broward, the state’s two largest Democratic counties, by more than a 2-to-1 margin," is "the highest turnout for a midterm primary election in Florida history," according to The Miami Herald.

“I am overwhelmed,” Gillum said during his victory party at Hotel Duval in downtown Tallahassee.

Gillum drew a late endorsement from self-proclaimed Democratic Socialist Alexandria Ocasio-Cortez, who noted that he ran on a platform which included support for Medicare for All and marijuana legalization.

During a debate earlier this month, Gillum, when asked if he identifies as a socialist or a capitalist, responded:

I am a Democrat and an individual in this state who believes that we've had a rough ride these last several years. People are working, many of them harder than ever, and still can't bring down a wage where they can make ends meet. And so I realize that these labels are easy to throw on folks, but when you're struggling — when you want to make sure that you can work one job instead of multiple jobs as a way to make ends meet — these labels mean nothing. And so what I'm standing for is what is the everyday, lived experience of the people in this state. And I believe they need a champion, too.