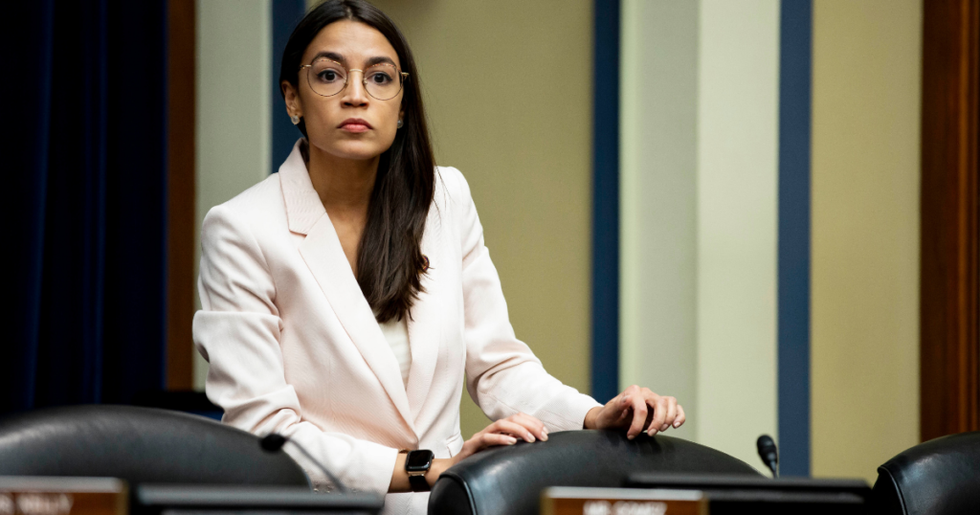 WASHINGTON, DC - MAY 15: U.S. Rep. Alexandria Ocasio-Cortez (D-NY) arrives to a House Civil Rights and Civil Liberties Subcommittee hearing on confronting white supremacy at the U.S. Capitol on May 15, 2019 in Washington, DC. During the hearing, subcommittee members and witnesses discussed the impact on the communities most victimized and targeted by white supremacists. (Photo by Anna Moneymaker/Getty Images)

Congresswoman Alexandria Ocasio-Cortez (D-NY) joined the growing nationwide wave of outrage over Alabama's total ban on abortions, unless the life of the mother is in danger. There are no exceptions for rape or incest.

The Alabama Human Life Protection Act, signed into law on Wednesday by Republican Governor Kay Ivey, also punishes doctors who perform abortions with up to 99 years in prison.

In a series of emotionally powerful tweets, AOC blasted the law - merely one of many such bills making their way through a dozen Republican-controlled state legislatures - for what it is clearly intended to do: control women.

The thread began Wednesday morning, where the Congresswoman summarized the law perfectly.

"Alabama lawmakers are making all abortions a felony punishable w jailtime, incl women victimized by rape+incest," AOC wrote on Twitter. "Of course, no added punishments for rapists. It’s going to @GovernorKayIvey‘s desk. She will decide the future of women’s rights in Alabama."

The law mandates that "children - 12 year olds - to carry a pregnancy by their rapist. This law would force people w/ mental disabilities to carry pregnancy by rape to term. This law forces people to be pregnant against their own consent," she said. "It’s horrifying."

After a long break, AOC restarted the thread later in the evening.

The abortion debate "is about women's power," she said. "When women are in control of their sexuality, it threatens a core element underpinning right-wing ideology: patriarchy."

Banning abortion is a "brutal form of oppression to seize control of the 1 essential thing a person should command: their own body," AOC stressed.

Men, AOC is right. We gotta do better.

@AOC Can we pass a law where if old white dudes want to legislate women's bodies they must first take a quiz on the… https://t.co/a0HhrYFfOS
— Crimson King (@Crimson King) 1557983700.0

Women across the country are in danger of losing their bodily autonomy and their right to make private medical decisions.

@AOC Not only does it control sexuality but banks, credits cards, landlords and workplaces will use 'you might get… https://t.co/bsBBByTxRM
— Rachel Guyett (@Rachel Guyett) 1558026772.0

@AOC It's a desperate attempt to protect the patriarchy. It implies women have no value beyond a functional uterus.… https://t.co/KSKOCcYutY
— Jason Aaron (@Jason Aaron) 1558027290.0

@AOC I wish people realized that this is also illegal for religious reason. I mean this infringes on some religious… https://t.co/NtqM4KeMiF
— Fluffysharkdatazz (@Fluffysharkdatazz) 1558008583.0

Because the Alabama law and others like it that totally ban abortion are unconstitutional, Republicans are signing them into law hoping that one or more of the legal challenges end up before the conservative Supreme Court. Their mission - arguably the holy grail of American conservatism - is to have Roe v. Wade overturned, eliminating women's constitutional right to abortions.