Children Are Suing The Government Over Climate Change, And Some Experts Say They'll Win

A group of young people and leading climate change scientist are suing the federal government for actively destroying the environment. A new study and withdrawal from the Paris Agreement provide new evidence that by supporting the fossil fuel industry, the government has deprived the plaintiffs of their Constitutional right to life, liberty, property, and protection of essential public trust resources. 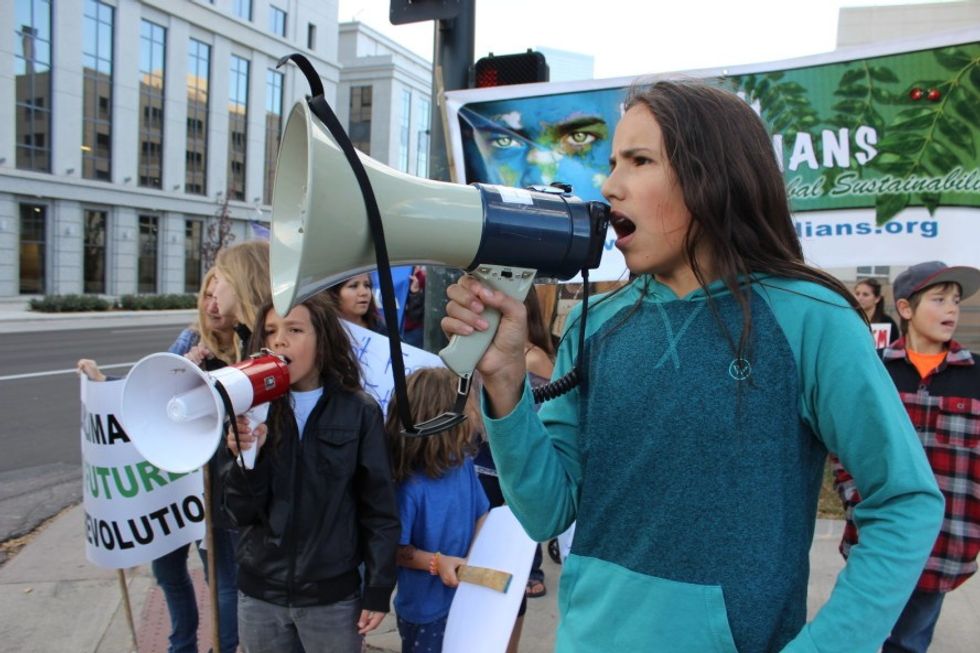 In a landmark federal case, children and young adults have joined with one of the founders of climate change research to sue the federal government for actively destroying the environment. President Trump’s decision to withdraw from the Paris Agreement and a new study has provided new evidence for the case.

Background and Status of the Lawsuit

In 2015, a group of young people—ranging from age 9 to 21—filed a lawsuit against the U.S. government in federal court in the District of Oregon. The case alleges that climate change is a violation of the plaintiffs’ Constitutional right to life, liberty, and property and that the government has failed to protect essential public trust resources. Plaintiffs argue that the government affirmatively acted by subsidizing the fossil fuel industry and allowing it to harm the environment, among other actions—which have short term gains—with full knowledge of the severe long-term risks for future generations.

The case was filed prior to President Trump taking office because, despite President Obama’s promises to counteract climate change, the plaintiffs did not think Obama was doing enough to protect the environment. The fossil fuel industry intervened, joining with the Obama administration to file a motion to dismiss the case in the U.S. Magistrate’s court. That motion was denied, and the ruling was later upheld by Judge Ann Aiken in a historic ruling that permitted the plaintiffs to sue the federal government.

“I have no doubt that the right to a climate system capable of sustaining human life is fundamental to a free and ordered society,” Aiken said. “A stable climate system is quite literally the foundation of society.”

After denying attempts by the Trump administration to dismiss the case, Judge Aiken discharged the fossil fuel industry from the case and set a trial date of February 5, 2018.

Joining the young plaintiffs in the suit were an organizational activist group, Earth Guardians, and Dr. James Hansen—world renowned scientist and climate change expert—serving as guardian of his granddaughter and future generations.

How Withdrawal from the Paris Agreement Will Affect Case

“It’s a fraud really, a fake,” he told the Guardian. “It’s just bullshit for them to say: ‘We’ll have a 2C warming target and then try to do a little better every five years.’ It’s just worthless words. There is no action, just promises. As long as fossil fuels appear to be the cheapest fuels out there, they will be continued to be burned.”

At the time, many saw the Paris Agreement as groundbreaking: a legitimate, workable attempt to stop the world warming any more than 2°C (3.6°F), and preferably no more than 1.5°C (2.7°F).Every nation that signed the Paris Agreement had to present their plans to decrease their greenhouse gases (GHGs) over the following decades. Nations are legally mandated to keep informing the UN as to their progress. However, there are no punishments to induce compliance.

Withdrawing from the Paris Agreement—and worsening climate change in general—will cause endless harm to Americans and people throughout the world. Natural disasters from flooding, hurricanes and fires will increase from ongoing attempts to ignore climate change. The financial costs of neglecting these issues and the decision to turn away from clean energy will take a tremendous toll on the the U.S. economy. Widespread poverty, disease, and violent crime will increase. Finally, the United States’ global standing as a world leader is at risk because China will likely take its place as the new environmental protectionist—despite its own substantial environmental issues—by using new technology to address current and future problems.

Hansen hopes his latest study will provide powerful evidence for the upcoming federal trial to force the U. S. to reprioritize its commitment to protect the environment, above and beyond the standards in the Paris Agreement.

According to the study, the “Earth is out of energy balance with present atmospheric composition, implying that more warming is in the pipeline, and we show that the growth rate of greenhouse gas climate forcing has accelerated markedly in the past decade.” In addition, the Earth is now as warm as the previous interglacial period, when sea levels reached six to nine meters higher than current levels.

In an interview with iflscience, Hansen saidthat “you need to actually start sucking CO2 from the air,” through carbon capture and storage (CCS) devices. In addition, instead of storing excess carbon dioxide (CO2)—which leads to great risk and expense—Hansen and the study advocate for improving “agricultural and forestry practices, including reforestation" to reduce levels of CO2.

“The bottom line,” Hansen said, “is that mitigation is urgently needed, or we will leave young people with an intractable situation in which climate change is occurring out of their control, and the costs become too hard to bear.”

Hansen believes most Republicans are bluffing about climate change at the expense of future generations.

“Most Republicans offline say that climate change is real and [humans] are a major factor in that,” Hansen said. In public, however, these politicians are willing to gamble the future of the Earth against their own political futures.

Hansen explained, “They feel threatened by the potential opposition of the most extreme elements in their party which can challenge them in the primaries – and people have lost their seat by saying climate change is a real issue.”

His theory about political gambling is reinforced by the 22 senators who encouraged Trump to withdraw from the Paris Agreement after these senators received long-time contributions from the fossil fuel industry. Specifically, the senators’ campaigns—which have collected more than $10 million in oil, gas and coal money since 2012—sent a letter to the president urging him to withdraw from the Paris deal.

“We strongly encourage you to make a clean break from the Paris Agreement,” read the letter, drafted by Wyoming’s John Barrasso, chairman of the Senate committee on environment and public works, and Oklahoma’s Jim Inhofe, a longtime climate change denier and senior member of that committee.

Hansen is relying on the judiciary to be less vulnerable to party affiliation and more bound to scientific facts and evidence. Once a full trial and record can be created, which the administration continues to try to avoid, Hansen hopes the truth will prevail.

“Federal government does not want to put the science on trial,” according to Philip Gregory, lead co-counsel for the plaintiffs. “Science is based on facts, and this government survives on alternative facts. In the courtroom, alternative facts equals perjury.”

Hansen said, “We have to take advantage of the fact that the judiciary is less susceptible to that pressure. They can declare something to be unconstitutional.”

That’s why some people believe this unlikely case that started with a group of kids who got together to try to sue the government could end up before the United States Supreme Court.

“My generation is rewriting history,” Xiuhtezcatl Martinez, a 16-year-old plaintiff, said. “We’re doing what so many people told us we were incapable of doing: holding our leaders accountable for their disastrous and dangerous actions.”