The White House Just Shared the Cringiest Photo of Donald Trump for Flag Day, and Are They Just Trolling Us Now? 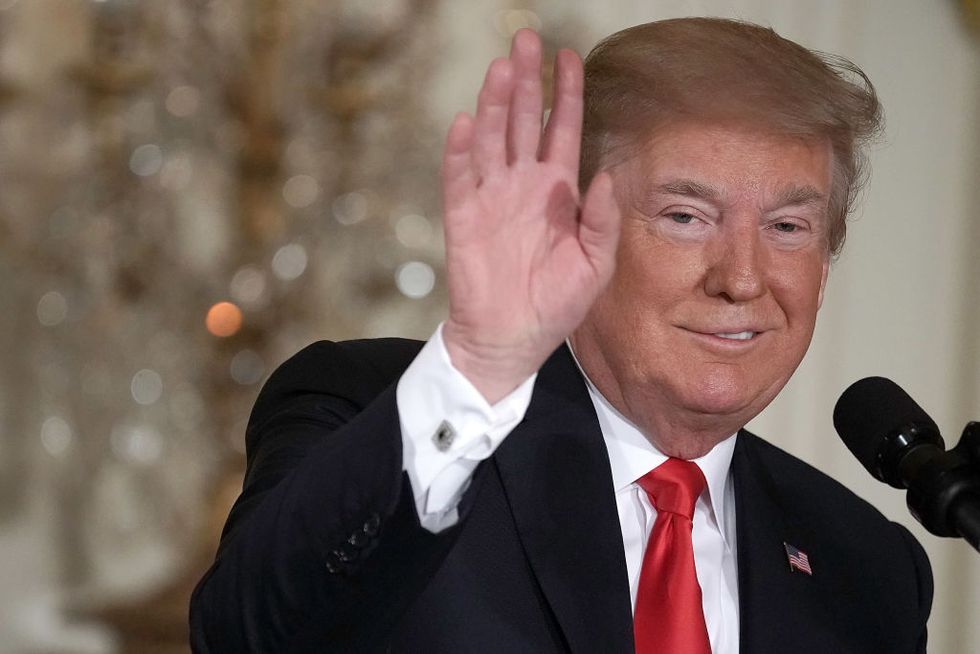 U.S. President Donald Trump waves during a meeting of the National Space Council at the East Room of the White House June 18, 2018 in Washington, DC. President Trump signed an executive order to establish the Space Force, an independent and co-equal military branch, as the sixth branch of the U.S. armed forces. (Photo by Alex Wong/Getty Images)

Not only is it President Donald Trump's birthday—er, John McCain Day—but the 14th of June also marks Flag Day which celebrates the adoption of the stars and stripes as the official flag of the United States.

Naturally, the White House found a way to make it all about the president...and make everyone uncomfortable in the process.

Trump has routinely criticized NFL players who don't stand or salute the flag for the national anthem to protest police violence against black Americans, but Trump—a five-time draft dodger—considers embracing the flag to be the ultimate sign of respect.

Others don't see the gesture as respectful at all.

@WhiteHouse Pretty sure that respect for the flag doesn't entail dry-humping it.
— Benjamin Dreyer (@Benjamin Dreyer) 1560538463.0

@Infantry0300 @WhiteHouse Seriously this picture is so disrespectful and embarrassing, if they had any common sense… https://t.co/DhHS5KoQjb
— justagirl (@justagirl) 1560535388.0

And for some, the picture brought to mind a certain tape from Trump's past...

The President's embrace of the flag has raised eyebrows before, and even inspired a John Oliver segment, but the White House bragging about what many perceive to be a faux pas is downright—well, actually, it's pretty on-brand.