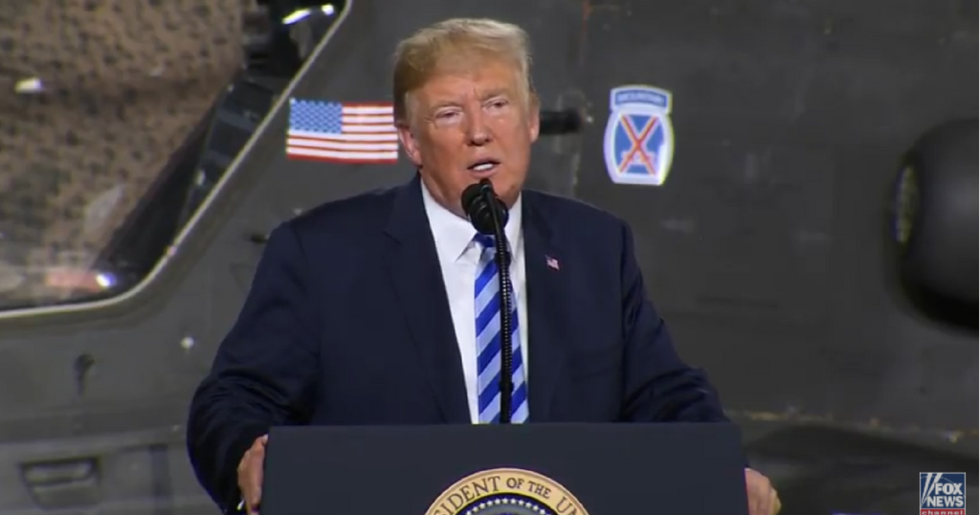 President Donald Trump signed the National Defense Authorization Act (NDAA) for fiscal year 2019 on Monday, authorizing $716 billion to be spent on national defense and the military.

Restoring our national security is a core piece of President @realDonaldTrump's agenda to reinvigorate America. Tod… https://t.co/XyiG8rL73F
— The White House (@The White House) 1534183080.0

In a statement, the White House said the NDAA represents Trump's commitment to protecting the United States via Trump's policy of "peace through strength."

The NDAA enhances the President’s ability to help protect the Nation by authorizing $716 billion in funding for defense and military activities. This unprecedented support will help to deter our adversaries and maintain the Trump Administration’s policy of peace through strength. The NDAA also fulfills the President’s request to give our troops a much-deserved pay raise.

The White House also said the NDAA "strengthens support for our allies."

This year's NDAA contains a $16 billion dollar increase from 2018 and reallocates resources from the war on terror to the growing tensions between the United States, Russia, and China.

It also calls for adding an additional 15,600 troops and 13 new navy ships - all of which were requested by the Pentagon.

The NDAA was approved by both houses of Congress earlier this month. Three Democratic Senators who are considered presidential contenders in 2020 - Kirsten Gillibrand (NY), Elizabeth Warren (MA), and Kamala Harris (CA) - opposed the legislation.

The bill was authored by Senator John McCain (R-AZ), whom Trump has habitually chastized.

Some on Twitter mocked the White House's tweet as "propaganda," mainly because the NDAA has been reauthorized every year since its inception in 1961.

But Trump's claims of concern for national security are weakened by his actions and rhetoric, particularly about Russia and its President, Vladimir Putin, whom Trump regularly defends.

Specifically, Trump continues to deride the investigation into the Russian attack on the 2016 presidential election. Since January 2016, Trump has called the probe a "witch hunt" on Twitter 110 times.

@WhiteHouse @realDonaldTrump You can’t even defend the situation room from a recording iPhone
— BrianD (@BrianD) 1534183228.0

Last month, Trump sided with Putin during their private summit in Helsinki, after the Russian leader denied having any involvement with the 2016 election hacks which many, including the American intelligence community, have concluded helped propel Trump to victory over Hillary Clinton.

During the summit, Trump also blamed the United States for growing political adversity with Russia.

The Trump administration and the Republican-controlled Congress have also done a lackluster job enhancing protections for American election systems.

@WhiteHouse @realDonaldTrump What about our Election security Budget that was NOT passed ? One reason: Meddling i… https://t.co/DxQvYyAGB9
— Chiri Mae (@Chiri Mae) 1534183426.0

Earlier this month, Trump's top intelligence officials warned that Russia's assault on American democracy is still very much alive, despite Trump's boasting of a "witch hunt."

"Russia attempted to interfere with the last election,” FBI Director Christopher Wray told reporters in August, "and continues to engage in malign influence operations to this day. This is a threat we need to take extremely seriously and to tackle and respond to with fierce determination and focus."

Director of National Intelligence Dan Coats said: "Russians are looking for every opportunity, regardless of party, regardless of whether or not it applies to the election, to continue their pervasive efforts to undermine our fundamental values."

"We acknowledge the threat. It is real. It is continuing," Coats added. "We are doing everything we can to have a legitimate election that everyone can have trust in."

Homeland Security Secretary Kirstjen Nielsen said that "our democracy itself is in the crosshairs."

The progress we have made is real, and the nation’s elections are more resilient today because of the work we are all doing. But we must continue to ensure that our democracy is protected.

This was after Senate Republicans rejected a measure allocating $250 million to assist states in beefing up the security of their election systems. Retiring Senator Bob Corker (R-TN) was the only Republican to vote in favor of the proposal.