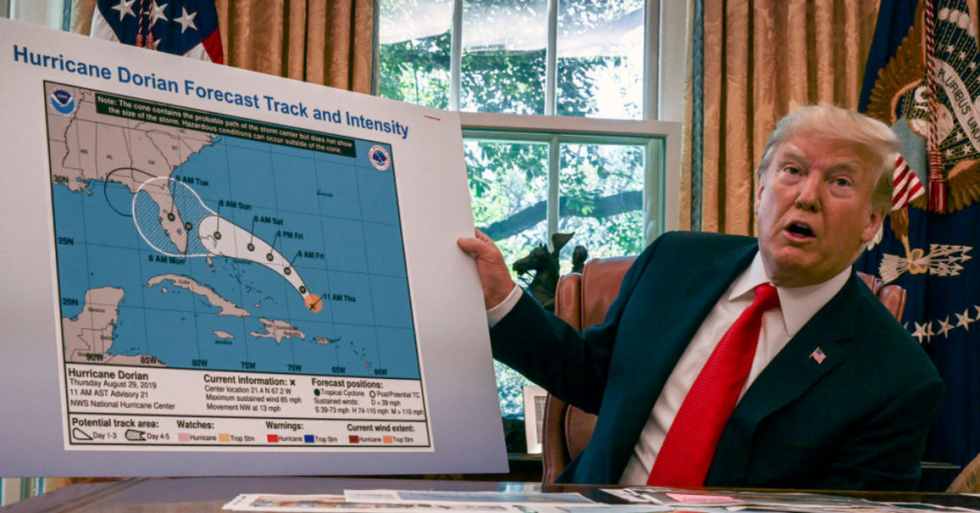 President Donald Trump during an Oval Office briefing on the status of Hurricane Dorian, in Washington, DC. (Photo by Bill O'Leary/The Washington Post via Getty Images)

President Donald Trump came under fire on Sunday morning for tweeting that Alabama was in the path of category 5 Hurricane Dorian—causing the National Weather Service (NWS), National Oceanic and Atmospheric Administration (NOAA) and the state of Alabama to reassure residents the hurricane was not headed in their direction.

But the President is not known for accepting his errors with grace, or even admitting to them. And on Wednesday during a press briefing in the Oval Office on Hurricane Dorian, the Trump administration demonstrated how far they would got to be right.

The President shared an altered and outdated map of Hurricane Dorian's projected path with an obvious addition done in what appeared to be a black permanent marker to add Alabama to Dorian's trajectory. While many are getting a laugh out of the absurdity of the situation, not everyone is laughing.

At Fox News, Senior Meteorologist and Fox & Friends contributor Janice Dean cited what was wrong with the artwork added to an official weather briefing map.

"The sharpie-bubble was drawn by someone else. This map is inaccurate, misleading and fake."

Just so everyone is clear. This forecast cone was from 5 days ago. Alabama was NEVER in the official cone from the… https://t.co/z6ZCmaBSiR
— Janice Dean (@Janice Dean) 1567625188.0

"PS: It is a violation of federal law to falsify a National Weather Service forecast and pass it off as official."

PS: It is a violation of federal law to falsify a National Weather Service forecast and pass it off as official.… https://t.co/TDikkz8yQF
— Janice Dean (@Janice Dean) 1567626381.0

So what is the big deal?

When millions of people are given short notice that they are in the path of a deadly storm, a public panic can ensue which can lead to injuries and deaths. For that reason, NOAA, NWS and Alabama officials were quick to correct Trump on Sunday.

The cited statute dates back to 1948.

People were appalled over the apparent emphasis of ego over public safety.

@JaniceDean @andylassner It's heartbreaking that like the"Wall" that Mexico is going to pay for, no one cares. Ever… https://t.co/QWjhqRVAhD
— ellie phillipo (@ellie phillipo) 1567634829.0

@JaniceDean Do you think #Evangelicals are praying it shifts west to prove their Messiah was right?
— Debra Tripp (@Debra Tripp) 1567637090.0

@JaniceDean This was a computer image and it was made with white outline as to where the hurricane was going you ma… https://t.co/zRKxjQxX64
— Denise Lewis (@Denise Lewis) 1567637529.0

Although not everyone was a fan of honesty from Fox News.

@dalekramer @JaniceDean Nana, she's a meteorologist! She's doing her job, which is to present and defend FACTS. Do you understand that?
— betty (@betty) 1567639460.0

While others needed an explanation for why it was a "big deal."

Many Fox News followers and Trump supporters tried to find ways to prove President Trump was right while Dean, a member of the American Meteorological Society was wrong.

On Thursday Dorian had dropped from a category 5 to a category 3. It is still not on a collision course with Alabama.