Donald Trump Made Several Bizarre Statements on Tuesday, and George Conway Really Wants to Make Sure You Know About Every One 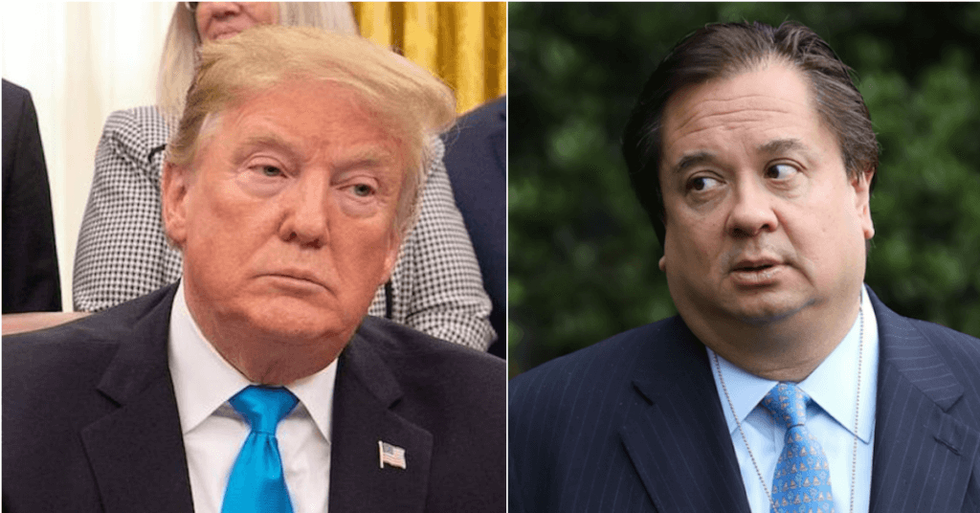 President Donald Trump made a series of remarks ranging from false to incoherent throughout the day on Tuesday while meeting with NATO Secretary Jens Stoltenberg and later at a dinner for the National Republican Congressional Committee (NRCC).

Longtime Trump critic and husband to Trump advisor Kellyanne Conway, attorney George Conway made sure to let the public know about each one. Conway has speculated on Trump's mental fitness before and revived those speculations again, retweeting news of the President's latest remarks as evidence.

Conway retweeted a video from the meeting with Stoltenberg in which Trump repeatedly says the word "oranges" in an effort to say "origins."

Watch the bizarre attempts below.

Conway also retweeted a video from the same meeting in which Trump—for the third time—declares his father was born in Germany. Fred Trump was born in the Bronx.

That fact seemed to be lost on Trump.

And that was just Tuesday afternoon.

Trump's words took a turn for the worse at the NRCC dinner later that night, as Conway informed his followers, retweeting a comparison of the President to Don Quixote—the main character of a Spanish novel by Miguel de Cervantes. Quixote, who becomes mad in his immersion of chivalric literature and propaganda, confuses wind mills for giants and vows to slay them.

Trump has long said that wind power doesn't work when the wind isn't blowing (it does), but this appears to be the first time he's claimed the noise can actually cause cancer.

ICYMI: Trump at the NRCC dinner last night: "If you have a windmill anywhere near your house, congratulations, your… https://t.co/xx8w3EgVnE
— Amee Vanderpool (@Amee Vanderpool) 1554295299.0

After insulting Democratic lawmakers, Trump continued, lamenting that someone would leak the entire speech to the media, despite the dinner being broadcast live on C-SPAN. Conway took the quip as further evidence that Trump is "not ok."

He retweeted others who have noticed what many can only describe as the President's rapid mental decline.

Conway pointed this out himself as well in a former tweet of his from last month, which he retweeted for emphasis on Tuesday.

He isn't the only one who's noticed.

Interviews of Trump as a middle-aged man who speaks in full sentences, doesn't do impersonations, and rarely speaks above a conversational tone stand in stark contrast to the Trump of today.

See the decline for yourself.

@TheDailyEdge @realDonaldTrump My concern about his mental health arose when he started his campaign for president… https://t.co/1lAA7Evd8B
— Michel Doucet (@Michel Doucet) 1554287142.0

America is witnessing Donald Trumps mental health decline rapidly and the only reason people are laughing at him ra… https://t.co/XT4M1gekx8
— dylan (@dylan) 1554265288.0