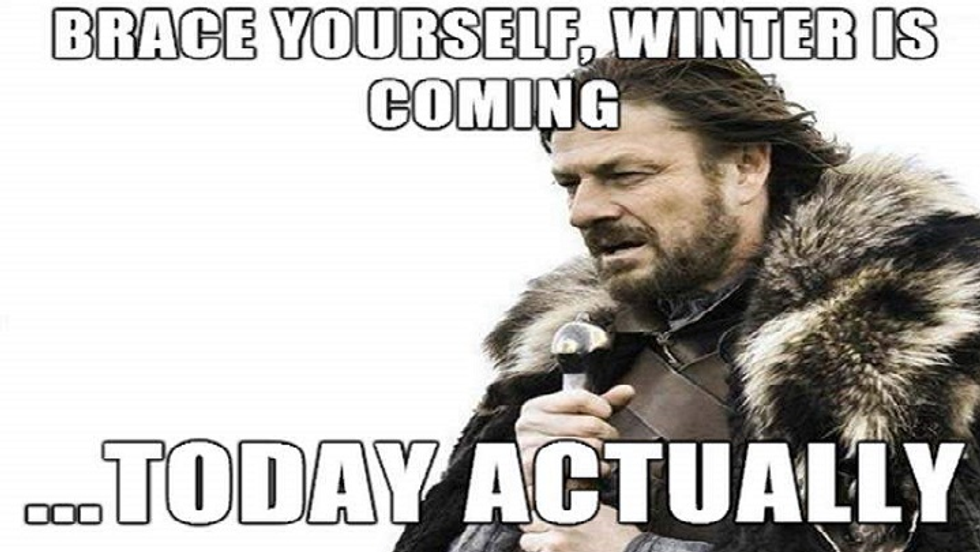 Annually on Dec. 21, we welcome the fourth and final seasonal change of the year. The yearly astrological phenomenon known as Winter Solstice brings the shortest day of the year and a long cold night. But if you scour the internet hard enough, a host of delightful memes may make the transition easier.

Take this one, for instance. A classic from the golden days of Game of Thrones, when Aria had no blood on her hands and winter had yet to arrive.

Of course, we've known it's coming. It happens every year, so, like this robust squirrel, we're prepared. Though maybe not quite as prepared as he is.

And with all that winter weight comes the satisfaction of knowing nobody can tell it's there.

Just because it's winter doesn't mean you have to sacrifice style. This cat gets it, all bundled up in a colorful — and cozy — ensemble.

Not everything about winter is good, however. That first trip to the bathroom in the morning is a nightmare of epic proportions. Maybe your bathroom doesn't look like this, but it certainly feels like it.

That face is accurate. Winter Solstice means contemplating how important it is to get out of bed. Can you hold it for another hour until the heat really kicks in?

Then again, winter isn't so bad in other parts of the world. While some suffer from below-freezing temperatures, others get to walk around in shorts and flip flops.

There's also these guys, who thrive on the freezing temperatures. No amount of freezing weather can bring them down. It's like they're bionic.

Unfortunately, not all of us thrive and survive during winter. The first day of winter usually starts off with a trip to the local pharmacy to stock up on vitamins and cold medicine.

Finally, it's hard to get through any occasion without some reference to religion and beliefs. Before it became a part of the Christmas season, Winter Solstice was a Pagan celebration. Ironically, much like Dec. 25 was before Christmas took over.