Will You Be My Mummy: Dead Bodies in Museums Raise Ethical Dilemmas 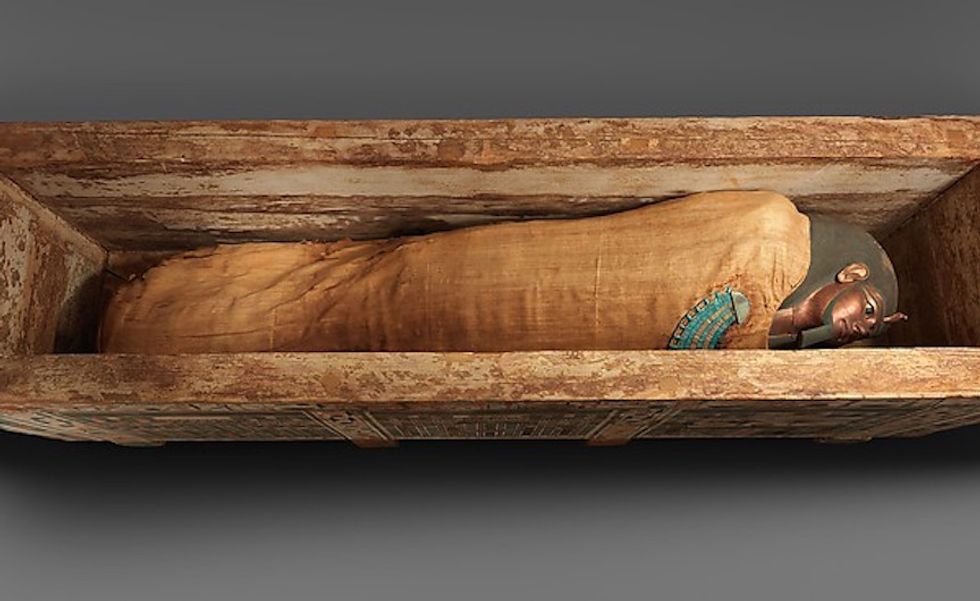 In the center of the Metropolitan Museum of Art’s recently opened exhibit Ancient Egypt Transformed: The Middle Kingdom lies a dead body. Inside a narrow open wooden coffin, a mummy rests on its left side. As we gaze upon the wrapped body and painted mask with recognizable facial features, a feeling of unease descends. Here’s a body exhumed from its grave for our education and pleasure. But is that right?

The body belongs to Khnumhotep, an estate manager (or steward) for the pharaoh, who died about 4,000 years ago. The beauty and intricacy of the coffin and mummy indicate the extent to which the Egyptians prepared for death and made the preparations a central part of their religious and cultural practice. The ancient Egyptians took evident care to preserve the body; perhaps that is the reason it feels so unsettling to witness. Preparing for the afterlife clearly meant a lot to these ancients, which raises an ethical dilemma for museums about balancing the public interest against respect for the deceased.

Under Wraps: The Process of Mummification

Preparing for death required a lifetime of effort. Chief among the preparations was mummification, a process that took 70 days and 600 pounds of natron, a naturally occurring sea salt. Mummification removed as much water from the body as possible, preserving the remaining tissue like salting preserves beef.

The result was a very dried out, but recognizable, body. This allowed the deceased’s soul (called the ba and represented as a human-headed bird), to leave the body each day and visit relatives still living. At night, the ba returned to the body. To ensure the ba found the correct body, a mask representing the deceased covered the mummified head.

The initial step in mummification removed the internal organs to dry and preserve the body both inside and out. First to go was the brain, which was not preserved because Egyptians confused the function of the brain with the heart, which they believed to be the center of wisdom, emotion and personality. A hooked instrument inserted into the

nostrils broke through the bone separating the nasal cavity from the brain so bits of brain tissue could be removed from the skull. Archeologists have speculated that the instrument pulverized the brain tissue into an near liquid state that drained from the nostrils when the body was turned onto its stomach. The process was a delicate operation that could easily disfigure the face (disfigurement would make it difficult for the ba to identify the body).

Next, embalmers used a piece of volcanic rock to slit open the left side of the deceased’s abdomen, which facilitated removal of the stomach, intestines, liver and lungs. These were washed with frankincense, myrrh and palm wine, then mummified with natron and stored in special canisters called canopic jars. One organ was placed in each jar and the four jars were placed near the coffin in the tomb. The jars seen below are not from Khnumhotep’s tomb but are also on display at the Met. These jars may or may not still contain the mummified organs, which only adds to the unsettling sense of sacrilege. Viewers become distinctly aware that these organs were preserved for the after-life, not the enjoyment of gawking museum-goers.

Getting to the Heart of the Matter

Interestingly, the heart remained in the body. The ancient Egyptians believed that the heart, as the organ of reason and intelligence, could testify to the goodness of the deceased during the “weighing of the heart” ceremony. This ceremony, in which the gods determined whether the deceased was worthy of an eternal afterlife, was the ancient Egyptian equivalent of the Christian Judgment Day. During the ceremony, the deceased would confess that he or she had not committed any of 42 specified sins ranging from eavesdropping to violence.

The symbolic ritual that accompanied this “negative confession” was the weighing of the heart, where the deceased’s heart was placed on one side of an enormous scale. On the other side sat an ostrich feather, representing truth and goodness. If the heart balanced against the feather, the deceased had led a good life and could proceed into the afterlife. If the heart outweighed the feather, then the scale sunk and the heart would be devoured by Ammit,

a composite animal with the head of a crocodile, the body of a lion and the rear legs of a hippopotamus. These were the three largest “man-eating” animals known to the ancient Egyptians.

In the painting below, the deceased (dressed in white, indicating his purity) witnesses the weighing ceremony. He holds the hand of Anubis, the jackal-headed god of mummification who accompanies the deceased into the afterlife. Here Anubis also performs the weighing ceremony. Recording the results at right is Thoth, the ibis-headed scribe god; and at the bottom sits Ammit who hopes the heart outweighs the feather.

The weighing of the heart ceremony (Credit: source)

Back in the corporeal world, after the embalmers removed the internal organs, they stuffed the body cavity with spices, myrrh and packets of cedar shavings, all of which protected it from bacterial growth. The cedar also gave the desiccated body a more rounded, human shape. Then the wrapping process began.

Hundreds of yards of linen were fashioned into strips that wrapped around the body creating six layers of covering. Each finger and toe was individually wrapped, as was each arm and leg. Between each layer, the embalmers placed amulets, or small charms to protect the deceased from evil spirits. Then they tied together the arms and legs, and more linen bandages swathed the entire body.

At every step, the linen was painted with a natural resin that glued the layers together. Over time, chemical changes caused the resin to turn black. Early archeologists believed this resin to be bitumen, a tar-like substance thought to have healing capabilities. The Persian translation of bitumen is mumia, which is where “mummy” comes from.

Finally, a mask made of cartonnage was placed on the head. Similar to papier mâché, strips of fiber or papyrus were glued together with resin. The resulting mask could be molded to the shape of the mummified head and then, when hardened, painted

or gilded to represent the deceased. Paints were fashioned from natural materials, such as crushed bone or ivory (for white), charred wood (for black) and crushed minerals for colors, such as yellow (pyrite) or violet (vermillion). During the Middle Kingdom, representations of the face and body became more naturalistic as evidenced by this funerary mask on display at the Met.

narrow and conspicuously false beard marks a noticeable feature of Khnumhotep’s mask. The beard associated the steward with Osiris, the god of the underworld, who gave hope for a new life after death. Before the Middle Kingdom, only the pharaoh wore a false beard (like on the mask of Tutankhamen below) because he (or she—female pharaohs also wore false beards) was believed to be the living embodiment of Osiris.

A false beard on the mummy mask ensured the deceased became the god and went on to everlasting life. During the Middle Kingdom, beliefs evolved and Egyptians believed everyone possessed a soul and could be welcomed into the company of the gods after death. So, for the first time, non-royals wore Osiris’s beard.

Eat, Drink and Be Merry: Sustenance in the Afterlife

With the body now ready for burial, the deceased was placed in the coffin on its left side so that it faced east, toward the rising sun (the symbol of resurrection). On the outside of the coffin, corresponding to the face on the mask, artisans painted an eye panel that allowed the deceased to look out onto the world where it watched for offerings of food and wine brought by relatives. It was the responsibility of the living to bring these offerings for the rest of their lives. And once there was no longer anyone alive to bring sustenance, painted images on the sides of the coffin or the tomb walls magically transformed into life-sustaining materials, such as the meats, vegetables and fruits shown piled on the offering table.

Stela of Khety and His Wife, Henet (Credit: source)

These artifacts affirm the Ancient Egyptian view of death as a temporary interruption in a cycle of life that continued into eternity. The afterlife would look very similar to the living world, and every individual received the afterlife as a reward for leading a good life. But entry into the afterlife was not guaranteed. The dead had to negotiate a dangerous underworld

journey and face final judgment before they were granted access. When successful, enough provisions were required to provide food and drink for their spirit to live forever.

But there’s something unsettling about these items. Viewing them closely feels simultaneously titillating and disrespectful. Egyptian mummies retain the physicality of a living human. The exhibition of mummies enables visitors to come face-to-face with the inhabitants of ancient Egypt, forging a personal relationship with the past. Khnumhotep, for instance, is someone’s relative and, while anyone who knew him has been dead for thousands of years, his descendants may still live in Egypt today.

How would we feel if we knew the gravesites of our forefathers were dug up and their coffins and bones on display? There’s always an outcry when a graveyard is threatened by development, including an incident just this month in Baltimore. So why is it distasteful to dig up a modern graveyard but not an ancient one?

Museums have been grappling with just this issue and configuring their interpretative materials to recognize the individuality of a mummy. For instance, the Met now lists “human remains” as one of the materials on display. This is a welcome change from the disrespectful way Americans treated mummies in the past. For instance, up to the early 20th century, mummies were ground into powder and sold as pharmaceutical remedies for a host of ailments including poisoning, incontinence and migraines. They were used as a popular paint for artists (“mummy brown”), and, during the Civil War, fashioned into paper when linen strips from imported mummies substituted for the shortage of domestic linen.

What, If Anything, Should be Done

The debate over how to display human remains is certain to continue well beyond the Met’s exhibit, which runs through January 24. Also certain to continue is our fascination with mummies and what they signify about ancient Egypt’s views on life and death.

The Egyptians prepared their tombs for eternity, taking into account the inevitability of the living having no connection to the deceased. The fact that they believed painted images possessed magical abilities to replace the actions of living descendants says a great deal about the high regard they had for the power of art. So perhaps an art museum is an appropriate resting place for Khnumhotep. After all, the Met states its mission as presenting “works of art across all times and cultures in order to connect people to creativity, knowledge, and ideas.”

So when you visit the Met and see Khnumhotep, remember that this mummy might well have been someone’s daddy.