Who Is Hosting SNL Tonight? 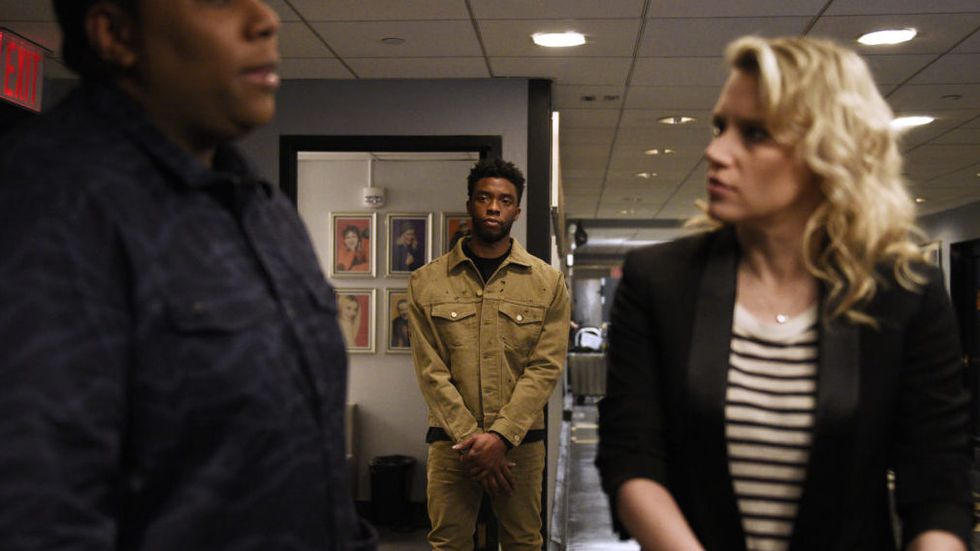 Tonight is Apil 6, and Chadwick Boseman will be hosting SNL alongside musical guest Cardi B.

Boseman is still riding the wave of Black Panther's success, which became one of the top five biggest box office hits heading into this week.

Cardi B also released her album, Invasion of Privacy, just last week. On Monday, she will co-host The Tonight Show with Jimmy Fallon.

SNL has released a few promos to get fans excited for tonight. In one skit, Kate McKinnon, Alex Moffat, and Kenan Thompson ask Boseman why he can't open the locked stage door with some vibranium. "Vibranium ain't real!" Boseman responds, much to their dismay.

He continues, "Oh, you know what?” Boseman says to the three elated comedians. “I didn’t wanna tell them, but maybe I did bring a little stash of vibranium. I can’t seem to find it because — we made it up for the movie!”

Boseman, 41, was born and raised in South Carolina. He graduated from TL Hanna High School in 1995. Boseman began focusing on high school during high school; he wrote his first play Crossroads as a junior. Boseman went on to study at Howard Univerity in DC, where he received a bachelor of fine arts in directing in 2000. Eight years later, he moved to Los Angeles to pursue a career as an actor.

The actor's first on-screen role came in 2003, in an episode of Third Watch. In 2008, he played a recurring role in the series Lincoln Heights. It wasn't until 2013, 13 years after graduating college, that Boseman booked his first starring role in the film 42, in which he played Jackie Robinson. Prior to that, he was directing an off-Broadway play in the East Village in New York City.

After 42, Boseman booked consecutive large roles. He was cast in Draft Day with Kevin Costner, as James Brown in Get on Up, and in 2016, he played Thoth in Gods of Egypt.