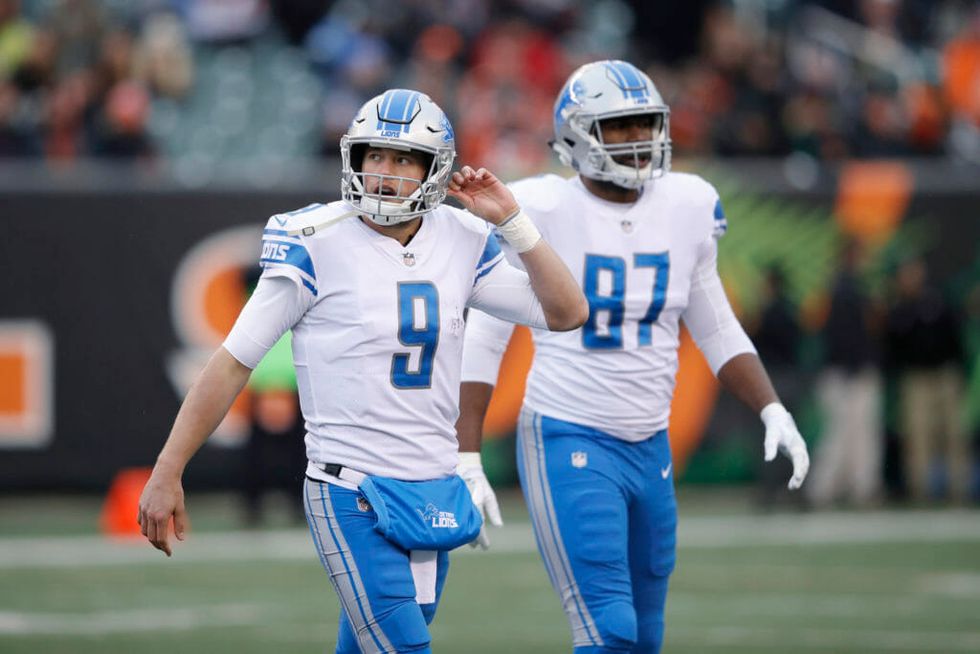 CINCINNATI, OH - DECEMBER 24: Matthew Stafford reacts after throwing an interception during a game against the Cincinnati Bengals (Joe Robbins/Getty Images)

Hard to believe we are already here, but welcome to the week 17 edition of Starts and Fades. Before we get into the crazy storm that is week 17, I want to take a quick look back at our picks last week. Dion Lewis was excellent for us, being the main reason we cashed in most of our contests. Getting those kind of massive performances in your lineup can make up for small mistakes made elsewhere. Cam Newton disappointed us a little, but a late rushing touchdown salvaged his day. As for this week, I cannot stress enough the importance of looking at the inactive lists on Sunday morning. It is almost certain that a surprise player(s) will show up inactive and present a slate-changing opportunity. Be ready to make adjustments come Sunday morning to stay ahead of the sharp field. Grab your coffee, settle in, and let’s get started!

During this article you will often see references to DVOA (Defense-adjusted Value Over Average). It's a metric from Football Outsiders that measures a team or players efficiency; DVOA does this by comparing results from every play to a league average based on situation and opponent. For example, if an offense runs for 4 yards on a 3rd and 3, it will be weighted and graded more favorably than if an offense runs for 4 yards on 3rd and 15.  DVOA is a better way to compare team’s offenses vs opposing defenses than more traditional stats like yards gained and allowed.

Stafford is actually one of my favorite quarterbacks in the league. He may never get the respect he deserves in our current culture of super bowl or bust for judging quarterbacks. This week, he gets a great matchup with the Packers in a game the Lions need to win to go to the playoffs. Green Bay has one of the worst secondaries in the league and have the 22nd ranked DVOA pass defense. The last time these two teams met Stafford threw for 361 yards and two scores. While the rest of the league will have to deal with the arctic blast temperatures across the nation, Stafford will be at home. That just happens to be in a dome, where he plays better. The Lions are one of the most pass-heavy teams in the league, and I would pair Stafford with Marvin Jones and Golden Tate this week for massive tournament upside.

Jamaal Williams has been a favorite of this article this season, and for good reason. The Packers play at a much slower pace with Brett Hundley under center, which really opens up rushing opportunity for Williams. Jordy Nelson, Davante Adams, and Aaron Jones have already been ruled out for this game, further solidifying Williams role. We should expect 16-22 touches with passing game work included. The Lions are ranked 28th in DVOA rush defense, and have allowed the fifth most fantasy points to running backs over the last five weeks. Jamaal Williams’ price is too cheap for such a guaranteed workload and a great matchup. Fire up Williams with confidence in any format.

This spot could easily be Derrick Henry, and on sites that allow flex running backs I recommend using all three guys. Drake has the better matchup though, and a proven record of success this year. Buffalo is 23rd in yard per carry, dead last in touchdowns allowed, and have been the worst rushing defense in the league since trading Marcel Dareus. Moreover, Damien Williams is doubtful for this game, potentially giving Drake a huge workload. In the three games prior to the blowout loss to the Chiefs, Drake had a combined 79 touches! That kind of workload against an awful rushing defense has me licking my chops at using Kenyan Drake this week.

I think Julio Jones has a chance to go absolutely nuclear this week. The Panthers are ranked 21st in the league at stopping opposing team’s best wide receivers. Furthermore, Carolina has been a bad secondary in recent weeks, and Julio Jones has torched them historically. In a game the Falcons must win, I will pay up for Julio Jones this week on my daily fantasy rosters.

If I had to choose one player to describe what a boom or bust performance is, it would be Hilton. However, any time he is playing in a dome I will roster him. Also, this week he takes on a Houston team that is struggling to stop the pass. This is evidenced by their 24th ranked DVOA pass defense. Hilton last faced the Texans in week 9, where he exploded for five catches for 175 yards and two scores. I think Hilton has tournament winning upside this week, and he will be a staple of my tournament lineups.

While Tennessee will be motivated to get into the playoffs, I do not think they will have a shot to get there with Mariota at the helm. Jacksonville already has their playoff spot locked up, but as a young team they have come out and said they are not resting anyone for week 17. This makes sense as they are coming off of a loss, and do not have many players with playoff experience. Assuming we can take them at their word, Mariota is a terrible play this week. He has not thrown over 200 yards in three of the last five weeks. Also, since week 6, he has two games of multiple passing touchdowns, while having three games of multiple interceptions thrown. Moreover, he has multiple three interception games. Avoid Mariota this week.

There are so many good running back spots this week, so I thought I would highlight some of the potential trap spots. Mike Davis has done well since becoming the lead back in Seattle, however he has one of the worst offensive lines in football. Also, Russell Wilson often takes over the game with his arm and legs at times, negating the run game. It does not help that Arizona comes in with the first-ranked DVOA rush defense. If you need a cheap back, look to Wayne Gallman of the Giants who has 24 targets over the last three weeks.

This one has trap written all over it. Brown will likely be the highest owned player on the weekend, and I think a full fade is in play. The Rams are benching almost everyone on offense and defense; I do not think the offensive line and supporting cast will be very good. This may result in an over-owned Brown disappointing, as San Francisco has been good at stopping running backs over the last four weeks. The leverage play here may be to take the 49ers defense as they are extremely cheap everywhere.

Last week Mike Evans went over 100 yards receiving. That is significant because it was well over a calendar year since he last did that. In fact, it was the first time since week 12 of last season Evans eclipsed the century mark. This week it should be much harder for Evans to go over 100 yards; The Saints have the fifth ranked DVOA pass defense, and have Marshon Lattimore, who ranks fifth in ProFootballFocus’ coverage grade. Lastly, Evans has now gone four straight weeks with seeing eight targets or fewer. I do not want any shares of Mike Evans this week.

It has been a disappointing season for Amari Cooper, and the Oakland Raiders in general. This week they take on a Chargers defense that owns two ridiculous pass rushers, and three top graded cornerbacks. Furthermore, When Michael Crabtree and Cooper are both on the field, they have combined for two top-end wide receiver scoring weeks. The best way to beat the Chargers is on the ground, and I will not want any Amari Cooper this week.

Thank you for riding along in this NFL journey with me this year. Hopefully, I have been able to help increase your profits in your daily fantasy contests. Even more importantly, I hope I have been able to teach you a thing or two about how to be a successful daily fantasy player; I want you all to have the tools to establish a winning, repeatable process. If you enjoyed my writing this year, shoot a comment in the section below. As always, go crush this week!