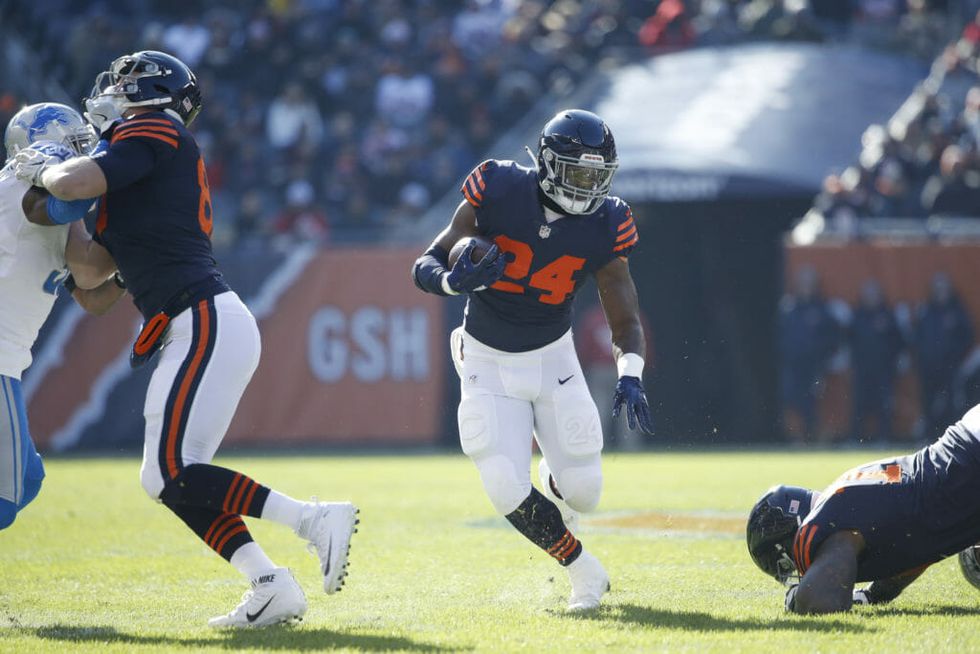 We have an interesting slate in NFL DFS this week. There is no game projected to go over 50 points, which makes sense after digging into the slate. In a week with no truly great plays standing out, it will take an even deeper dive this week to bring you the top plays for Week 13 NFL DFS. We've got five core plays and five fades ready for you as you decide who to start and fade in tournament play. Grab your coffee, settle in, and let’s get started!

During this article you will often see references to DVOA (Defense-adjusted Value Over Average), a metric from Football Outsiders that measures a team or players efficiency by comparing results from every play to a league average based on situation and opponent. For example, if an offense runs for 4 yards on a 3rd and 3, it will be weighted and graded more favorably than if an offense runs for 4 yards on 3rd and 15.  DVOA is a better way to compare team’s offenses vs opposing defenses than more traditional stats like yards gained and allowed.

The Chargers are implied to score the second most points (27.8) of all the teams playing this weekend. This is not surprising once you see they are facing the Browns. The way to move the ball on the Browns is through the air, as they have the second best run defense DVOA but the 27th ranked pass defense. This classic “funnel defense” scenario is exactly what I look for when choosing a quarterback. A funnel defense is described as a team you cannot run against, so a quarterback will be forced into more passing. This should create a high floor and ceiling this week for Rivers. Furthermore, the Browns have allowed 22 passing touchdowns this year, which is the second most in the league. Rivers is my favorite quarterback this week.

Jordan Howard is a player we like to roster whenever we think the Bears will be competitive in games. This week, the Bears take on the San Francisco 49ers. This is a good matchup for Howard, as the Bears enter this game as three-point favorites over their opponent. Typically, this means that the game script should stay in Howard’s favor and he will be racking up rushing yards throughout the whole game. The 49ers are the 22nd ranked run defense DVOA, 32nd in fantasy points allowed to running backs, and 30th in rushing yards allowed per game. Contrarily, the Bears are sixth in yards per carry, and eighth in rushing yards per game. If the Bears want to win this game, they will feed their workhorse 20+ times.

If you are playing the Thursday slate, Crowder is a tremendous option. The Redskins have the 11th best pass offense DVOA, and they face the Cowboys, who own the 26th best pass defense. Over the last four weeks, Crowder has emerged as the number one wide out on his team. His target totals over the last four weeks include (in order of most recent) ten, eight, 11, and 13. Correspondingly, the Cowboys are absolutely terrible at covering slot wide receivers. Crowder will line up against Orlando Scandrick most of the game, who just got toasted by Keenan Allen on Thanksgiving. I expect Jamison Crowder to have a big game this week.

Finally a week that I can recommend Hopkins to use in daily fantasy, as we have been fading him for weeks. He had a murderer’s row of matchups following DeShaun Watson’s injury. This week, he gets an easy matchup against the Tennessee Titans. The Titans have the 24th pass defense DVOA in football, and Hopkins is poised to have a huge day. With team mate Will Fuller still injured, I can project Hopkins at 15+ targets this week.

The price tag is high for Gronk, but there’s a few reasons I will be using him this week. First, Gronk is coming off a two-touchdown week, which means he is currently in good health and form. Secondly, Gronkowski has massive career splits playing in his hometown, Buffalo, New York. Here are his results in Buffalo since 2010. In 2010, he had two touchdowns in his Buffalo game. In 2011, he had two touchdowns. In 2012, he caught five balls for 104 yards. In 2014, he “let us down” with seven catches for 94 yards. In 2015 and 2016, he had over five catches, over 100 yards, and a touchdown in both games. Lastly, Buffalo’s defense has fallen off a cliff since trading away Marcel Dareus, and I suspect Tom Brady will feed his tight end all day.

Matthew Stafford is a player I am going to avoid this week. Firstly, he has not thrown for over 300 yards in three weeks. Secondly, Stafford gets to face the second best pass defense in all of football in the Ravens. Correspondingly, if you combine the Lions adjusted sack rate of their offensive line and the adjusted sack rate of Baltimore’s defense, you get a top-five ranking this week for Baltimore to get sacks. Adding it all up, even though Draft Kings slightly reduced his price, I am hands off of Stafford this week.

Melvin Gordon has been a curious case for a couple years now. Often viable to use in daily fantasy because of a big workload, he has always been a largely inefficient runner. However, even the workload is not a guarantee. Austin Ekeler has slowly been getting more snaps and usage out of the backfield. Furthermore, the Browns still have the second-best rush defense DVOA in all of football. If you combine the adjusted line yards of the Chargers offensive line and the Browns defensive line, (3.46 for LAC and 3.34 for CLE) you get a matchup that is one of the worst on the weekend. This week is shaping up to be a Philip Rivers week.

Around the DFS industry, people are falling in love with this running back. This is mainly because team mate Damien Williams will miss this game, and Drake should get most of the work in the backfield. However, Drake gets the worst matchup in all of football this week, as he has to try and run against the first-ranked run defense. The Miami offensive line is one of the worst in the league, and while Drake’s volume may be tempting, I would much rather use Jamaal Williams this week. This is assuming that Ty Montgomery misses another game, as he did not practice on Wednesday.

Stop me if you have heard this before, but, another week of avoiding wide outs against the Jacksonville Jaguars defense. The Jaguars boast the first-ranked pass defense DVOA and arguably the best corner tandem in the league. They also allow the fewest points to opposing wide receivers. These two teams met once already this year, as Hilton had two catches for a meager 27 yards. I will continue to fade wide outs against Jacksonville, and will not use Hilton this week.

What a joy it is to be typing his name again, and Gordon is shaping up to be a pretty popular value play this weekend. I am rooting for Josh Gordon-in football, in life, and in general. However, we need to be realistic with this kid. He has not played a game since 2014, and we cannot expect a full complement of snaps. Furthermore, he takes on the sixth ranked pass defense this week in the Chargers. Moreover, the Chargers top two cornerbacks (Casey Hayward, Trevor Williams) both rank in the top 13 at their positions per Pro Football Focus. We will revisit Josh Gordon in a couple weeks once he is in football shape. However, for this week he is a fade.

Hopefully you enjoyed breaking down the top week 13 plays with me. As always, check back next week to find the top plays for week 14. Go crush this week!