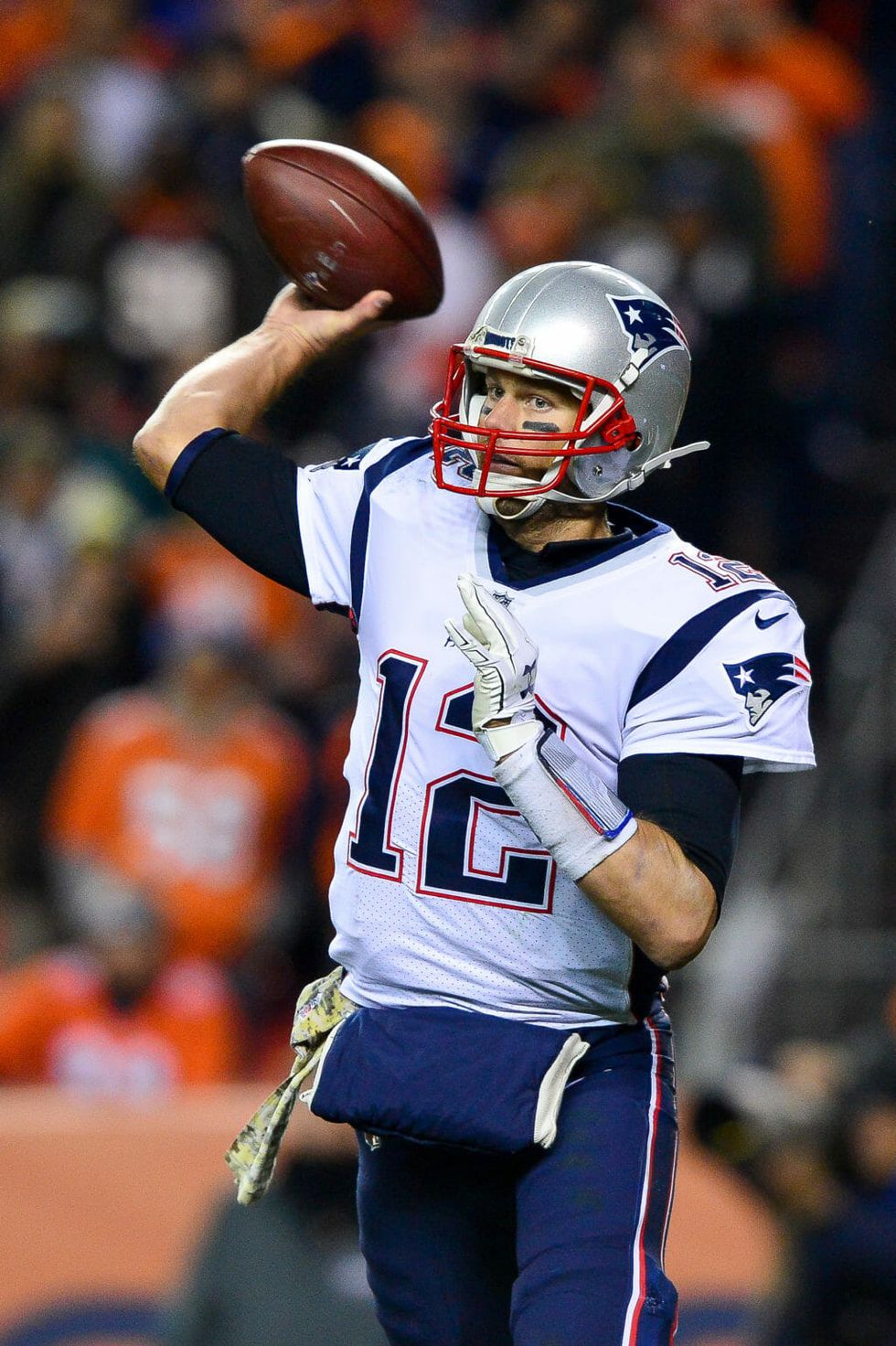 Week 11 NFL DFS: 5 Starts and 5 Fades: After another successful week, we are back again for Week 11 NFL DFS starts and fades. Unlike the last couple slates, we will have to deal with less weather and fewer bye weeks. With some of the better teams back in action, we should have an exciting week ahead. The team with the highest implied Vegas point total is the Patriots at 30.5 team points. Teams who also have a high implied score are the Saints, Chiefs, and Eagles, all coming in over 26 points.

During this article you will often see references to DVOA (Defense-adjusted Value Over Average) a metric from Football Outsiders that measures a team or players efficiency by comparing results from every play to a league average based on situation and opponent. For example, if an offense runs for 4 yards on a 3rd and 3, it will be weighted and graded more favorably than if an offense runs for 4 yards on 3rd and 15. DVOA is a better way to compare team’s offenses vs opposing defenses than more traditional stats like yards gained and allowed.

Tom finds himself in a unique situation I do not come across very often. This week Brady and his 1st ranked DVOA pass offense gets to take on the 32nd ranked Oakland pass defense. This game has one of the higher totals on the weekend at 54.5 points; both teams should be able to go up and down the field scoring. The game could shootout and turn into a touchdown fest. With so many weapons to choose from, the strategy can be to pair him with one of his more consistent weapons; tight end Rob Gronkowski or wide receiver Brandin Cooks come to mind. Further complicating which weapon to choose is that Oakland is the worst team in the league at stopping pass-catching running backs. The problem with this statistic is that New England can hit you with four different running backs, making the situation messy.

After a quiet couple of games, Hunt looks to rebound this week and comes in as my favorite high-priced runner on the slate. Hunt’s bad weeks typically come when the Chiefs lose, as they have in three of the last four games. When Kansas City is playing from the lead, they like to feed their rookie workhorse the football. The New York Giants rank 27th in the league in rush defense DVOA. Furthermore, the Chiefs rank 5th in rush offense DVOA. This week I predict the Chiefs will be playing from ahead against their opponent; that should create another positive game flow for Hunt. We should see 22+ touches from the rookie standout.

My favorite cheap runner this weekend comes from the Green Bay Packers. Rookie Jamaal Williams finds himself as the last man standing in the backfield. Teammate Aaron Jones has already been ruled out. In addition, incumbent starter Ty Montgomery has a rib issue and has yet to practice this week, making it extremely unlikely he suits up. The Packers boast the second-ranked rush offense DVOA. Their opponent, the Ravens, come in as a slightly above average matchup. Baltimore ranks 19th in rush defense DVOA and 28th in rushing yards allowed, telling us they are not a team we have to shy away from. Opportunity is the most important factor when picking a cheap NFL DFS running back. With his teammates injured, Jamaal Williams has a great opportunity to score fantasy points this weekend. If somehow Montgomery plays, the pivot is to Patriots running back Rex Burkhead.

This spot almost went to Rob Gronkowski, as both players are almost identical prices on Draft Kings. On Fanduel, Kelce comes in $700 cheaper than Gronkowski. The savings is significant enough to take a stand with the Chiefs tight end. His opponent, the New York Giants have most likely quit for the season. This is evidenced by some of their play recently in the defensive secondary. Moreover, the Giants are the first team in the history of the NFL to allow a tight end to score a touchdown in all of the first nine games played. Kelce has the most yards out of all tight ends in the NFL, and comes in third in touchdowns. This spot should be a prime spot for Kelce to crush his price and go atomic in your lineup.

In order to pay up for all the expensive guys we want this week, we will need someone like Bruce Ellington in our lineup to make the salary cap work. Ellington does not have a matchup that stands out as elite. However, he's a good bet for 8+ targets and has other factors going for him. First, he is dirt cheap for the amount of targets he should receive. Furthermore, Will Fuller has already been ruled out, increasing the potential volume for Ellington. Likewise, DeAndre Hopkins will be shadowed by elite corner Patrick Peterson, which should funnel even more targets to Ellington. Head coach Bill O’Brien said this week that the Texans need to get Ellington the ball more. Keep in mind, he had already seen 16 combined targets in the last two games. Fire up Ellington with confidence this week.

The impact of losing Ezekiel Elliott is not lost on Prescott. Without his star runner, the Cowboys offense looked to be stuck in slow gear last week against Atlanta. Their opponent this week, Philadelphia, boasts the eighth-best pass defense DVOA in all of football; that makes this a very difficult matchup. Furthermore, left tackle Tyron Smith may miss this week after not playing last week. Without Smith and Elliott, the Cowboys gave up 8 sacks to the Falcons. Some may flock to Dak this week because of more offensive responsibility, but without some valuable offensive firepower I will be staying away.

Gurley comes in as the most expensive running back this week on Draft Kings, and second most expensive on Fanduel. The matchup and price lead us to stay far away, as Minnesota ranks 5th in the league in rush defense DVOA. Also, the Rams are road under dogs, which implies that they will be trailing in this game. The way to beat Minnesota this weekend will most likely be through the air with Sammy Watkins and Robert Woods. Unless he scores a couple touchdowns this weekend, Gurley will have a hard time paying off his exuberant price tag this week.

There is talk around the fantasy world that the Denver defense is crumbling. Even if this were true, attacking them with Joe Mixon would not be a good idea. Denver ranks first in rush defense DVOA, and the Bengals rank 26th in rush offense DVOA, including ranking 31st in yards per carry. Cincinnati will have a hard time in the mile high atmosphere in Denver this week and I will not be playing Mixon.

While many of us assumed Hopkins would not be relevant after DeShaun Watson’s injury, he has continued to be peppered with targets. He has been less efficient with the targets, but has still been a fine season long fantasy football player. This week, star cornerback Patrick Peterson will be shadowing Hopkins all around the field. While the targets may still come, I suspect the final stat line for Hopkins will be something rather insignificant (5 catches for 50 yards) and not close to the 20 points he needs to reach value for us in our lineup.

Doctson got shutdown last week by Minnesota and the smothering Xavier Rhodes coverage. This week, he faces an even stiffer challenge traveling to New Orleans. The Saints boast the fourth-best pass defense DVOA in all of football. Furthermore, they have rookie cornerback Marshon Lattimore; he's quickly becoming the best corner in the league. While teammate Jamison Crowder spends most of his time lined up in the slot, Doctson will have to contend with Lattimore on the outside play after play. I suspect this will lead to another disappointing performance from Doctson.

Hopefully you have a better idea of how to attack the week 11 NFL DFS slate. The favorite plays I listed will actually be in my daily fantasy lineups, and I hope they will be in yours, too! Check back next week for a quick note of this week’s plays and a summary of how to attack Week 12. Also, check back in on Thursday for an article for the three game Thanksgiving slate. Go crush this week!