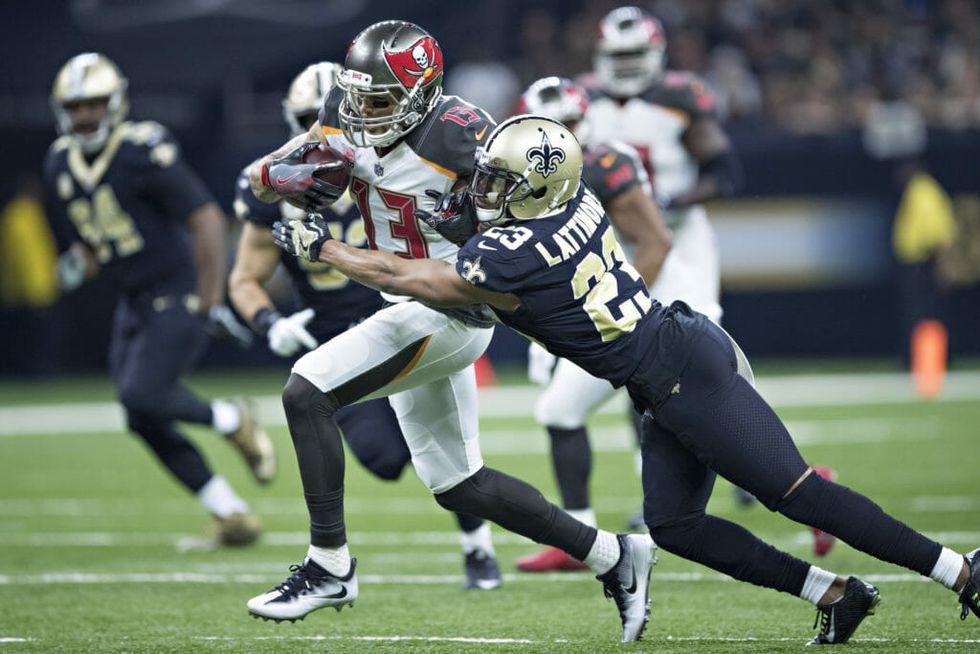 Mike Evans has been suspended for one game without pay, the NFL announced on Monday.

In the midst of an on-field dispute between Buccaneers quarterback Jameis Winston and Saints defensive back Marshon Lattimore, Evans blindsided Lattimore with a full-on charging hit from behind, knocking the rookie to the ground.

BREAKING: Mike Evans will be suspended one game after his hit yesterday against the Saintspic.twitter.com/RuuTBLgNDE

Jon Runyan, the NFL Vice President of Football Operations, issued a statement directed at Evans. "Your conduct clearly did not reflect the high standards of sportsmanship expected of a professional," he wrote.

Evans expressed regret over the incident, admitting his emotions got the better of him. He described his actions as "childish" to reporters. Buccaneers coach Dirk Koetter condemned the behavior of both Winston and Evans as "totally unacceptable".

Tampa Bay ultimately ended up losing the game by a score of 30-10. Although the fourth-year wideout remained in the game after the hit, he finished with just one catch for 13 yards. He's had a down season so far, failing to top 100 receiving yards in any game so far this season.

Many believe that Evans should have been ejected after the hit. Instead, he's set to serve his suspension by sitting out next Sunday's game against the Jets. NFL Network Insider Ian Rapoport hears that Evans is likely to appeal the suspension. If Evans were to do so, he must take action within three days.

Losing Evans for even one game would be devastating to the 2-6 Buccaneers, whose playoff hopes are already on life support. They're already planning to rest Winston for a few weeks due to shoulder issues.

In the event of Evans' absence, wide receiver DeSean Jackson and tight end Cameron Brate could see an uptick in targets. Adam Humphries could garner some additional looks as well.