Eminem Slams Trump in Freestyle Performance, Says What We're All Thinking About Who Really Runs the White House

He's not holding back. 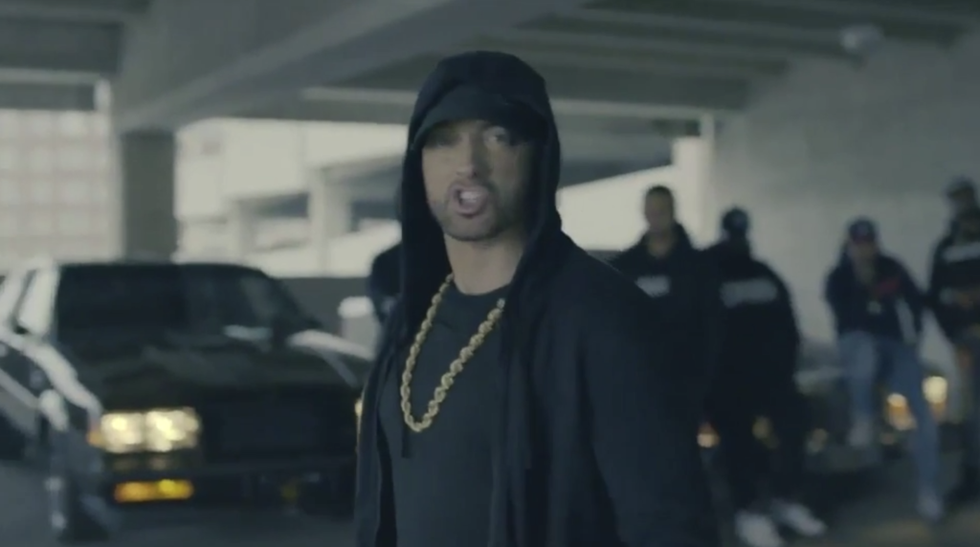 His performance began with an introduction by Big Sean who welcomed Alex Moscou, a student from Marjory Stoneman Douglas High School in Parkland, Florida, to help introduce Eminem.

During his introduction, Moscou, wearing a “March For Our Lives” T-shirt, invited others to join he and his classmates in Washington, DC, on March 24th.

"We're tired of hearing politicians send their thoughts and prayers to us, and doing nothing to make the necessary changes to prevent this tragedy from happening again," Alex expressed.

If those elected to represent won't do what's right to keep us safe, we're going to be too loud for them to ignore."

Eminem's new lyrics struck at the NRA and their influence in American politics:

This whole country is going nuts

And the NRA is in our way

They’re responsible for this whole production

They hold the strings, they control the puppet..."

They love their guns more than our children...”

This isn't the first time Eminem has taken the president to task. Back in October 2017, the rapper released a freestyle performance, one that relies on rapping on the fly, that clearly targeted Donald Trump. Eminem's freestyle, titled "The Storm" debuted at the BET Hip Hop Awards and quickly went viral.

The lyrics of "The Storm" left no doubt of the rapper's opinion of the 45th president.

And any fan of mine who's a supporter of his

I'm drawing in the sand a line, you're either for or against

On who you should stand beside, I'll do it for you with this:

The rest of America stand up!

The original lyrics for "Nowhere Fast" already addressed some of the social ills of the world according to Mathers' view:

Like a tariff, blows half of Madison Square up, alas

We perish in the blast

No response yet from Donald Trump or the NRA, but others have taken to the president's preferred form of communication to comment on the Sunday night perfomrance.

@thehill @JW4Resistance Anyone who refuses to think that the NRA are anything but lobbyists are uneducated and shou… https://t.co/UjvyRRqTd1
— Meredith (@Meredith) 1520865149.0