Virtual Reality Technology Is Key to Combating the Opioid Epidemic 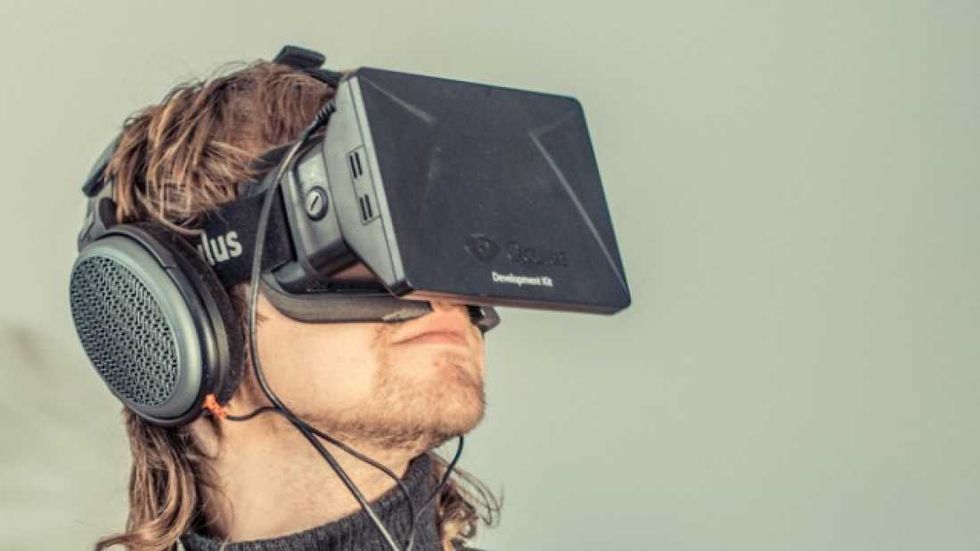 In October, President Trump finally declared what much of the country has known for a long time: the opioid crisis is a public health emergency. Yet while nearly 100 Americans die from opioid-related deaths each day, chronic pain continues to vex more than 25 million Americans. But the fast-developing world of virtual reality (VR) technology is providing relief to patients in clinical trials, hospitals, and soon in our own homes. This growing industry of pain-relieving VR may be at least part of the solution to the opioid epidemic—without the addictive, potentially fatal side effects.

The first successful experiments using VR to control pain, conducted in 1996, focused on the acute pain of burn victims. Particularly during bandage changes, where the patients were not at rest, opioids such as morphine failed to control the intense pain. By the early 2000s, cognitive psychologists Hunter Hoffman and Dave Patterson, of the University of Washington in Seattle, had developed a VR computer game called SnowWorld to help patients ignore pain signals while enjoying the intriguing game scenarios. They placed patients inside a $90,000 unit with an eight-pound helmet linked to a refrigerator-sized computer to play the game.

Hoffman and Patterson relied on previous research that indicated the brain interprets pain signals differently based on someone’s current feelings or thoughts and decided to take that research one step further: by intentionally diverting someone’s thoughts with other stimuli, perhaps the pain could be substantially reduced. The theory worked, and VR distraction therapy was born.

Neuroscientist David Linden recently explored this topic on NPR, explaining that the brain has more control over pain than we might think. It can send the cue: “hey that’s interesting, turn up the volume on this pain information that’s coming in,” or it can indicate: “turn down the volume on that and pay less attention to it.” Linden says our perception of pain relies on how the brain processes the information traveling in from the nervous system.

According to William Clark Becker, an internist at the Yale School of Medicine who researches pain management and addiction: “We know that positive thinking can actually work on a molecular level, by stopping ions from jumping the gate and causing pain signals to reach the brain.” With regard to pain he explained, “You can’t transplant people’s nerves. You can’t undo the process, but you can dampen the heightened pain signals that are getting up to the brain. And positive-thinking people are also better equipped to withstand the vagaries of everyday life.”

The VR games used in the medical setting seek to simulate an environment starkly different than the reality currently experienced by the patient. Hoffman’s original SnowWorld experiments were conducted on burn victims from the military, so the game’s environment contrasted the fiery intensity suffered during the cleaning of the burns by transporting patients to a world painted in cool blues and white. While medical personnel changed their bandages, patients flew through a winter wonderland filled with noisy animals, snowmen throwing snowballs and other hurdles, toward which subjects can hurl their own snowballs—all the while distracting their brains from the tremendous pain their bodies were experiencing. In fact, the pain was reduced by half. Sometimes, patients engaged with SnowWorld failed to even notice their painful procedure had been completed.

According to Hoffman, “Acute pain is a perfect match for VR.” He explained, “You only need it for 20 minutes and it has drastic effects.”

Howard Rose, CEO of Firsthand Technology—one of many companies that specialize in VR pain products—said the technology succeeds in other ways than the simplest levels of distraction.

“We know that if people feel anxious and helpless then their suffering from the pain is much greater.” Rose further explained that by transporting them to a place far from the pain, it lessens their anxiety, and the interactive nature of the game also gives them a greater sense of control.

He wondered if these other qualities to the VR therapy might also help patients with chronic pain.

But Rose, Hoffman and others in the field realize that chronic pain presents a more challenging problem. That’s why it may be more of a tool in a toolbox, rather than the be-all end-all solution for chronic pain. Still, it may be a stronger device than those we’ve known so far.

For instance, Hoffman explained, “If you say, ‘go home and meditate,’ not many patients will follow through,” Hoffman said. “But if you give them a VR system and say ‘go into this ancient world and meditate with monks,’ they’re more likely to actually do it.” From this perspective, VR is simply an attractive vehicle for a state of mind we want people to experience.

Indeed, studies show VR has been effective at reducing chronic pain. Dr. Ted Jones, a pain psychologist at the Behavioral Medicine Institute in Knoxville, Tennessee, conducted two small studies with a total of 40 patients. The first fitted 30 patients with the Oculus Riftheadset for a five-minute VR session, traveling through a world called Cool!, where they could feed or fire weapons at otters. Results showed participants experienced 66 percent less pain during the session, and one third less pain immediately afterwards. In the second study, 10 patients with neuropathic pain engaged in 20-minute VR sessions, once per week for three weeks. Results revealed participants experienced 69 percent less pain during the experience and 53 percent less pain immediately afterward.

According to Dr. Jones, “By comparison, morphine is generally thought to reduce pain 25% to 30%.”

With respect to long-term effects, patients in Jones’ trials reported their pain relief lasted between 2 and 48 hours after the sessions. According to Dr. Joe Browder, senior partner of Pain Consultants of East Tennessee (PCET), this may demonstrate that chronic pain “is not intractable, it can be influenced.”

One patient suffering from severe chronic pain as a result of non-Hodgkin’s lymphoma and as familial pancreatitis receives considerable relief from VR therapy, showing visibly less stress and a decreased hand tremorfollowing her treatments. She describes the VR as “an escape from pain reality.” Her husband reports: “After she does the VR, her mood lightens,” and says “[s]he’s more upbeat towards the world.”

A former military patient suffers from nerve damage from chemical weapon exposureand back problems from parachuting. He’s been suicidal from time to time because opioids are ineffective for his pain, but he claims the VR experience completely removes his pain, explaining, “It made me feel the way a man feels after achieving an orgasm.”

As a result of such positive results from previous studies, Cedars Sinai Hospital in Los Angeles is one of a number of hospitals experimenting with VR to improve patient pain levels. Dr. Brennan Spiegel studied patients with chronic pain playing a VR game called Bear Blast, where they earn points for shooting teddy bears. Compared to another group, who watched 2-D relaxation videos of natural waterscapes and received a small bit of pain relief, the Bear Blast group experienced 25 percent less pain.

President of AppliedVR Josh Sackman, the company that created Bear Blast and other 3-D content to reduce pain, said: “We’re trying to figure out how to prescribe the right experience to the right person based on their needs and their interests.” Sackman’s team is currently designing experiences that aim to distract, relax, create an escape, or educate. “[T]he end goal,” he explained, “is to teach skills using technology, not to depend on it for the relief itself.”

Spiegel’s later study added both the tailored and the teachingcomponent to Bear Blast. Patients could opt for a more personalized experience—swimming with dolphins, flying in a helicopter, or pondering life’s mysteries on a beach. Then a voice might initiate a breathing exercise or suggest you think about the positive or joyful things in your life. In this way, the VR experience trains patients to practice mindfulness and cognitive behavioral therapy techniques.

One revolutionary thing about VR pain management is that it doesn’t require altering a patient’s brain chemistrythrough chemicals. On the contrary, the process teaches the brain to better self-regulate and even has the potential to prevent traditional drug dependency. In fact, many of the goals doctors are achieving go beyond masking the pain, but teaching patients how to cope with their pain even beyond the context of VR.

That’s why the latest studies in VR pain treatment go beyond distraction therapy to increase the immersive and personalization of the experience. One example being developed by the Silicon Valley start-up CognifiSense, uses a type of modulated VR distraction therapy with data analytics to optimize pain relief and a second, new type of VR therapy known as VR Neuro-Therapy.

CognifiSense co-founder and CEO Tassilo Baeuerle told Clinical Pain Advisor: “VR Neuro-Therapy is a patent-pending technology that combines the immersive power of VR with implicit learning and other techniques to change how the brain perceives pain.”

One goal of VR Neuro-Therapy is to tackle underlying neuropsychological concernsthat may influence the perception of pain, which current VR distraction techniques have not been shown to affect—such as catastrophization.

Other studies use biofeedbackto teach patients to more directly control their relationship with chronic pain. In these VR models, the environments change based on the person’s psychological state tracked with biosensors. Diane Gromala and her team at the Pain Studies Lab at Simon Fraser University, Canada, have created a VR world to teach mindfulness-based stress reduction (MBSR), which is widely supported by evidence to reduce pain. However, learning it requires substantial time and commitment. In one of Gromala’s VR models, patients take a meditative walk where fog will increase with the patient’s stress level and lessen as the patient relaxes. One study showed patients experienced significantly less pain with the virtual walk compared to only listening to the audio track.

Next, Gromala’s team plans to study the long-term effect of regular sessions on the everyday life of patients. In a paper, the team explains they want more than to distract patients from their pain. Instead, they want to “arm them with a learned capacity to modulate it.”

As the cost of the VR technology has decreased dramatically over the years since Hoffman’s $90,000 Unit, Rose and Gromala want to create VR environments where patients can learn on high quality devices in the clinic and supplement those experiences at home. In 2017, the Oculus Rift, the size of a scuba mask, costs about $600, and HTC and Sony sell comparable products. Google and Samsung have much less expensive and less elaborate displays that work with tablets or smartphones.

The Future of VR, Chronic Pain, and Opioids

At a presentation in September 2017, Jones said that VR is on the threshold of revolutionizing chronic pain management in a way that could offer new pathways to tackle the opioid crisis.

According to Jones, “Past studies have shown that VR is very good at pain relief, so we need to adapt what has been done to date and develop new ways of treating pain in our opioid[-taking] pain population. We could be on the verge of a new era of pain treatment in which medications are rarely used, and VR is a primary treatment modality.”

He believes VR may be a particularly attractive tool to help minimize dosing because it gives patients something active to do. “With opioids, you just take it, sit and wait.” Jones said that’s why people keep taking more pills; people need to be able to do something to lessen the pain.

As Spiegel works to find innovative ways to relieve patients’ pain, he envisions a reality—not so far away—when patients may leave the hospital armed with a pair of VR goggles instead of a prescription for painkillers.