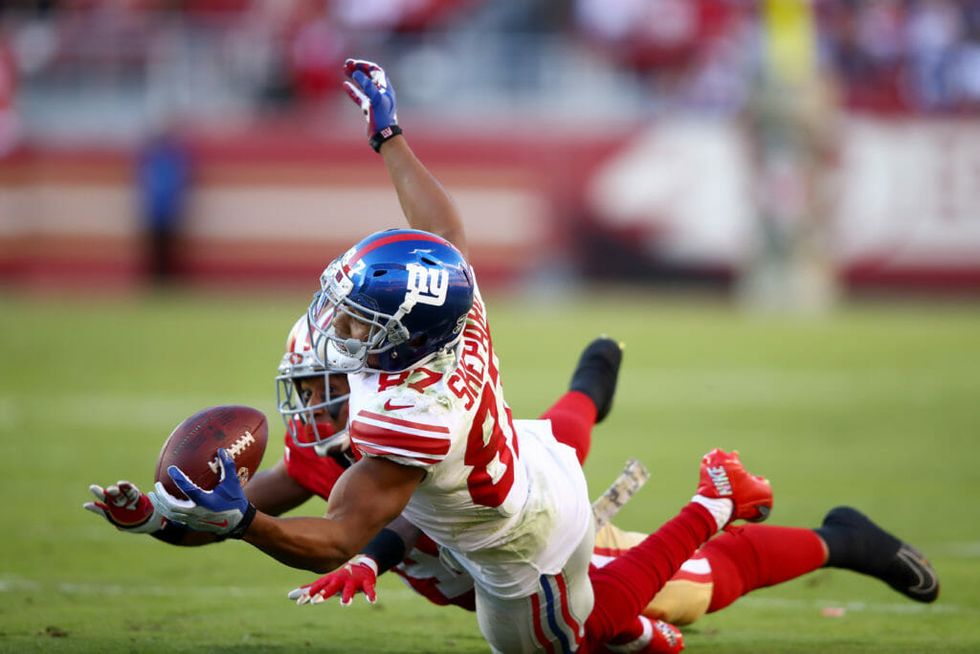 Superstar Odell Beckham Jr. may be out for the season, but apparently that doesn't mean we won't see ridiculous catches from Giants wide receivers.

Early in the second half of Sunday's game against the 49ers, sophomore wide receiver Sterling Shepard dazzled the crowd. Contested heavily by San Francisco corner back K'Waun Williams, Shepard dove for a highlight-reel catch by stretching his left arm out and just barely nabbing a third-down pass from quarterback Eli Manning.

Check out this video of Shepard's incredible play.

NFL officials reviewed the play afterwards, but the call on the field ultimately stood. New York gained 18 yards on the play to move within the 49ers' 20-yard line. Shepard finished the day with 142 passing yards, catching 11 of his 13 targets. The Giants came up short in the matchup, falling to the 49ers by a final score of 31-21.

The Giants took Shepard in the second round of the NFL Draft last year with the 40th overall pick. The 23-year-old product of Oklahoma University stands at 5-10 and weighs 194 pounds. As a rookie, he reeled in 65 passes for a total of 683 yards while finding the end zone 8 times. While he has only scored a touchdown once so far this year, he's on pace to exceed his yards and receptions totals after assuming the number one wide receiver role in New York; injuries to Beckham Jr. and Brandon Marshall provided him with a chance under the spotlight.  Shepard has totaled 475 yards on 30 receptions so far in 2017, with seven weeks of the NFL season remaining.

Following the loss to the 49ers, the Giants have a record of 1-8, good for dead last in the NFC East. They'll be at home this Sunday as they play the Kansas City Chiefs at MetLife Stadium.