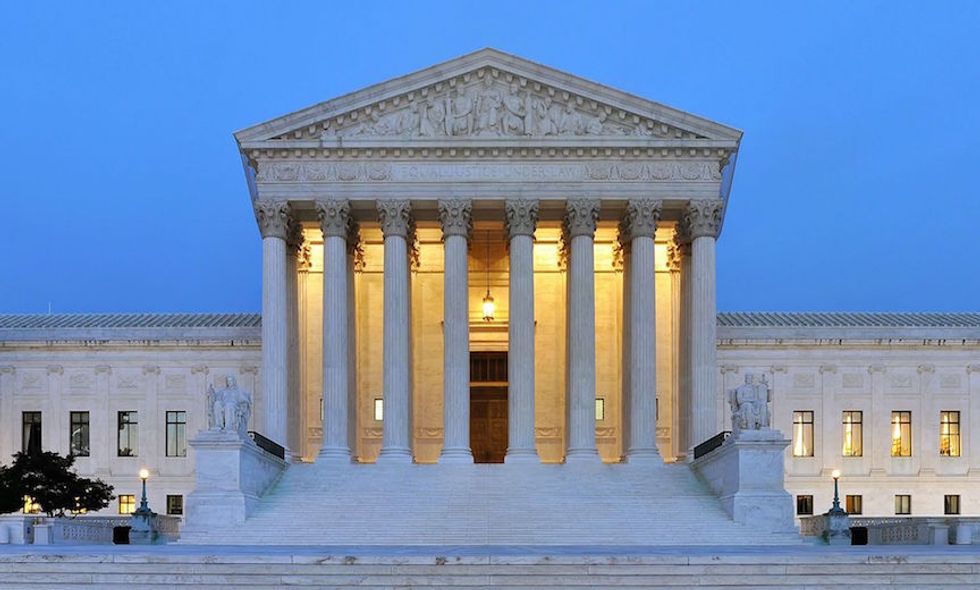 Voting rights advocates are declaring victory in the first of two gerrymandering cases heard by the Supreme Court. Yesterday, the high court found that the lower court applied an incorrect standard in a Virginia redistricting case. The lower court had found that, despite packing many districts by race, the challenged districts could remain as drawn because their shape met traditional gerrymandering guidelines.

In a decision written by Justice Anthony Kennedy, the Supreme Court disagreed that shape should be the primary criteria, and told the lower court to reexamine the districts, focusing instead on whether racial bias was one of the motivating reasons:

A legislature could construct a plethora of potential maps that look consistent with traditional, race-neutral principles, but if race is the overriding reason for choosing one map over others, race still may predominate.

Justice Samuel Alito issued a partial dissent, believing that the Supreme Court could have ruled on the districts instead of sending them back to the lower court. Justice Clarence Thomas also issued a partial dissent, saying that portions of the Voting Rights Act are "fundamentally at odds with our ‘color-blind’ Constitution, which ‘neither knows nor tolerates classes among citizens.’”

The case involved 12 Virginia House districts that were drawn in 2011, in part, so that each of them had a 55 percent majority of African-American voters. The challengers argued that by concentrating minority voters into fewer districts,  their votes were diluted, keeping some districts safer for Republicans. Only one of the districts was upheld by the Supreme Court. Yesterday's decision does not mean that the other 11 districts will be redrawn, but rather that the lower court will have to reassess whether the districts were impermissibly drawn primarily with race in mind.

Voting rights activists are hailing the decision. Anna Scholl, the executive director of Progress Virginia released a statement saying, “Voters should choose their elected officials, not the other way around... Politicians should not be allowed to use race or other political considerations to turn one election into lifetime tenure. We hope today’s decision leads to new, fair political district lines in Virginia drawn by an independent body to ensure Virginia voters have the final say on who sits in the House of Delegates.”

Republican Virginia House Speaker William J. Howell, also responded to the decision, saying “The plaintiffs in this case did not prevail... The Supreme Court overruled the way in which the district court analyzed the case. We have read the court’s opinion and are quite confident that we will win when we go back to the district court.”

A Supreme Court decision last year resulted in other Virginia districts being redrawn, and Democrats won what had been a safe Republican district. Additional districts are also under court challenge for not being "compact." Virginia will hold its House elections this fall, and it is unclear if changes will impact that election.