Flynn falsely denied that he ever revealed information regarding the presidential transition to Russian Ambassador Sergey Kislyak. Flynn later admitted to asking Kislyak to instruct Russia's UN representation to derail initiatives favored by Obama and to not retaliate against Obama's sanctions.

The announcement came soon after the release of FBI materials that led to Flynn's indictment, which Republicans falsely claimed exonerated him.

In 2016, the FBI uncovered a now-infamous plot by Russia to influence the United States presidential election in Donald Trump's favor. After the FBI noticed an unusual level of correspondence between Flynn and the Russian Ambassador after the election, officials briefed Obama that Flynn could potentially be a Russian asset.

Donald Trump and his supporters now claim that the FBI materials proved the Obama administration worked to entrap Flynn, and that Obama used his position as President to sabotage Trump's transition.

In erratic tweets, Trump called the conspiracy theory "Obamagate"—a so-called crime that he himself couldn't specify when asked by a reporter.

Instead, it did the exact opposite. 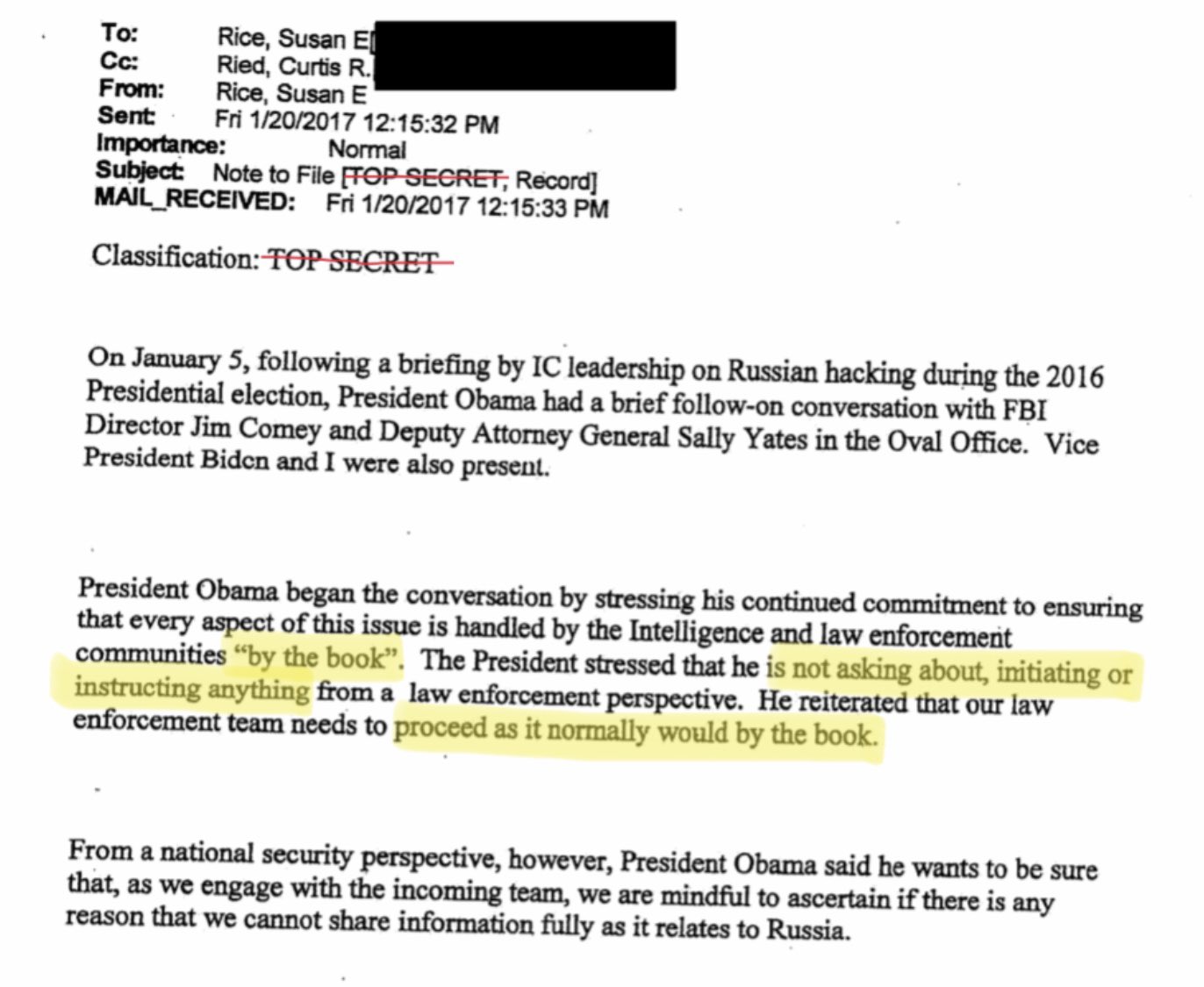 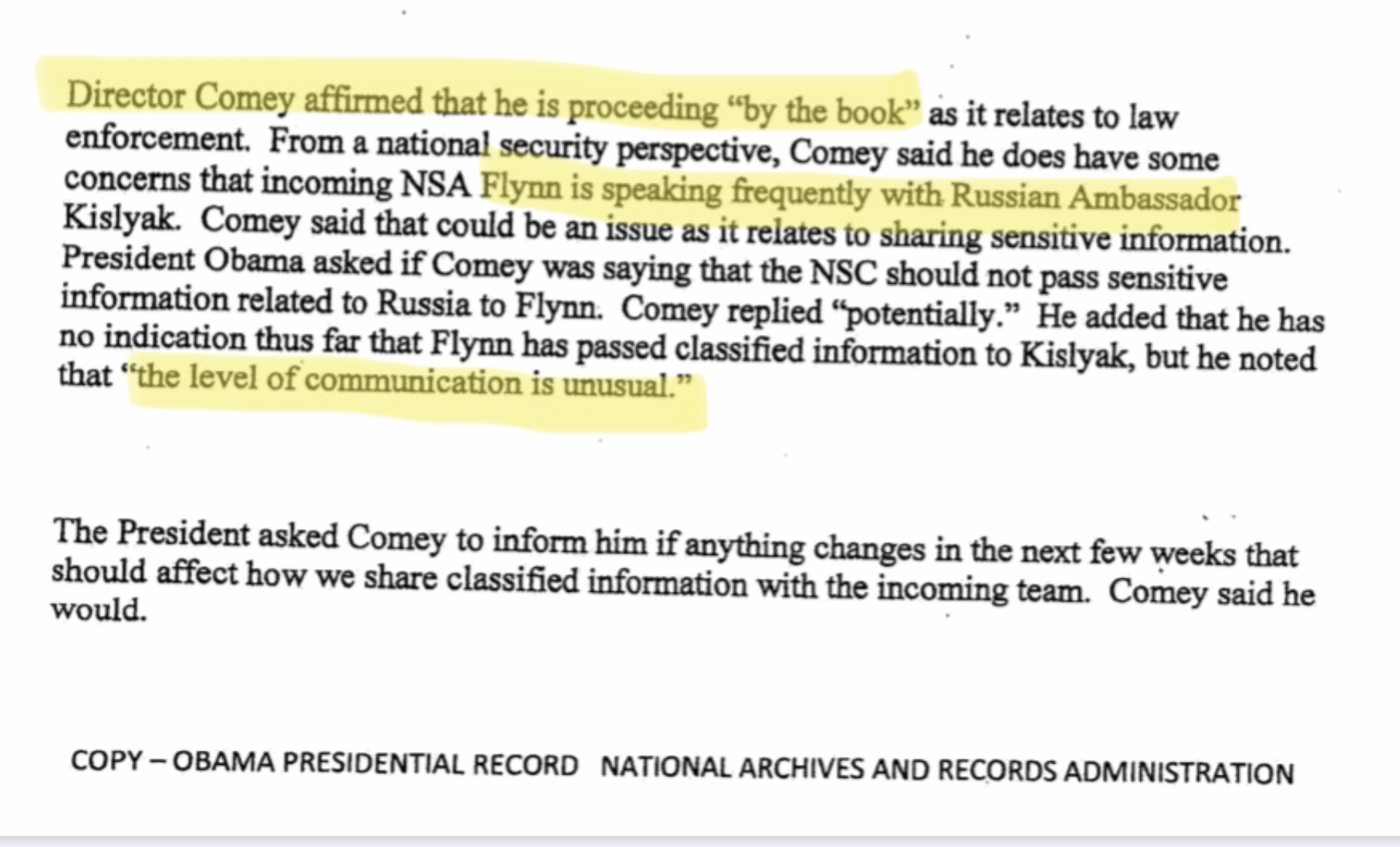 In the email, Rice makes a distinction between how President Obama wanted to proceed in regards to law enforcement on Flynn and the potential threat to national security Flynn could pose if the Obama administration was briefing someone who was working for Russia.

In regards to law enforcement:

"The President stressed that he is not asking about, initiating or instructing anything from a law enforcement perspective. He reiterated that our law enforcement team needs to proceed as it normally would by the book."

But in regards to fully briefing Flynn on Russia as the Trump team transitioned into the White House:

"President Obama asked if Comey was saying that the NSC should not pass sensitive information related to Russia to Flynn. Comey replied 'potentially.' He added that he has no indication thus far that Flynn has passed classified information to Kislyak, but he noted that 'the level of communication is unusual.' The President asked Comey to inform him if anything changes in the next few weeks that should affect how we share classified information with the incoming team. Comey said that he would."

Material that was supposed to prove damning to the Obama administration ended up being exculpatory.

Nevertheless, Trump's allies are still insisting that the email is somehow damning.

In the throes of Trump's impeachment proceedings, Republican lawmakers frequently cited testimony from European Union Ambassador Gordon Sondland. Sondland said that in a September 9 phone call, the President insisted there was "no quid pro quo" between U.S. and Ukrainian governments regarding the release of military aid to Ukraine.

"Quid pro quo" was the defining term for the entire impeachment process against Trump. The phone call testified by Sondland occurred the day after reports first broke of Trump's damning call with the Ukrainian President, in which Trump urged him to investigate Biden.

Yet, Republicans didn't believe he was covering his tracks and said the call was exculpatory, despite it being made after knowledge of Trump's quid pro quo came to light.

Interestingly enough, that standard isn't being applied to Susan Rice, though the supposedly damning email was sent nearly a year before Flynn was even indicted.

People didn't hesitate to call out the Trump allies spreading falsehoods about the Rice email.

Knowing Trump and his sycophants, the "Obamagate" allegations will join Hillary's emails and Burisma Holdings in the GOP conspiracy Hall of Fame.