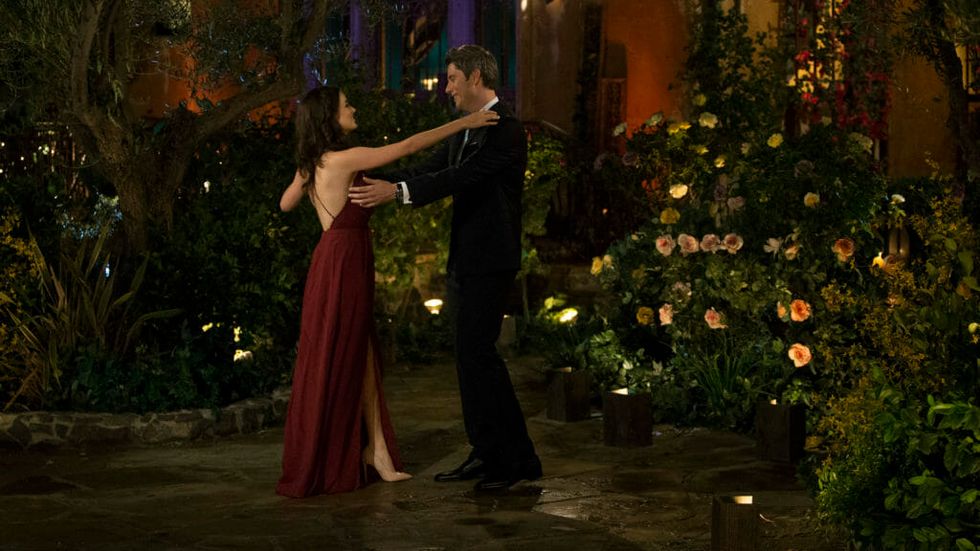 The Bachelor premiere is finally here, and the unlikely star of the season, Arie Luyendyk Jr., is ready to find love. This time, he hopes it's for good. And reciprocated.

The 36-year-old Nascar driver was the runner-up on Emily Maynard's season of the hit franchise. She ended up choosing Jef Holm, but the two broke off their engagement in a matter of months. Now, she's married to a man named Tyler Johnson, and the two have four children.

So what can you expect out of this season of The Bachelor? What drama will go down the first night? And does Arie even find love in the end? Read on to find out.

Stop reading now if you don't want to know spoilers for this season, and for tonight's premiere episode!

Arie Smooches Someone On the First Night

29 women will be competing for Arie's heart on season 22 of The Bachelor. How did we land on Arie, in the first place? According to E!,  producers never really stopped being interested in Arie. They wanted to have him back as the bachelor in two previous seasons, but things didn't work out. He tells E!, "I did get asked to do the first Bachelor in Paradise and I remember telling the producers at that point it's just not me... If you ever want me to be the Bachelor, I'll do that. But as far as the spinoff show, I just didn't feel like that fit my personality."

Well, it seems they eventually decided to take him up on that offer. And fans can brace for at least some drama tonight, because Arie's gonna be lockin' lips with a special lady tonight. In a recent interview with E! Online, Luyendyk Jr. said, "That first night, I told myself I'm not going to kiss anybody, you know, and then it happened..." He is the 'Kissing Bandit' after all....

No One Will Get Too Drunk on the Premiere Episode

According to Reality Steve, tonight's premiere is expected to be more low key than previous seasons, with no one getting too drunk or causing a scene. Bummer.

At least that gives us some time to become acquainted with the 29 contestants. We'll meet Krystal, who's a health and fitness coach. Reality Steve warns that she's got a very raspy voice which he's sure will "grate" on some people. Krystal, we'll come to learn, is a good samaritan. Her brother has been homeless for the last two years, so she does a lot of volunteer work for the homeless.

There's a Single Mother on the Show

There's usually a single mother or father on The Bachelor, and this season, it's Chelsea. She's 29, and from South Portland, Maine. Chelsea has a 3-year-old son named Sammy.

The real estate agent is gonna rub some ladies the wrong way this season. In the premier episode, she recognizes that trying to steal Arie away for alone time could make the girls upset, but she's willing to take that risk. "I'm making bold moves. Because being a single mother, I deserve more time than others... I'm not a b*tch, like, that's the thing. I'm a mother. And I have to tell you guys straight up, I'm pulling Arie aside first," she tells the other women. Aaaaand it's looking like that honestly is not going to go over well."

The Final Four Are...

In true Reality Steve fashion, he's already named the four ladies who will get to the end. Sure, Reality Steve could be wrong, but chances are, he's correct-- or at least, partially correct. He lists: Tia Booth, Lauren Burnham, Becca Kufrin, and Kendall Long as the final four.

He Does Find Love in the End

Does Arie find love in the end? Yes... but, he finds it with two ladies. In a recent interview with The Hollywood Reporter, Luyendyk Jr. said, "I actually fell in love with two people. That’s the hardest decision of your life, really. It’s a forever decision, so it’s not taken lightly. That was probably the hardest thing for me."

Season 22 of The Bachelor will premiere on Monday, January 1 at 8pm ET on ABC.