Why Aren’t the Armed Oregon “Protesters” Being Called “Terrorists”? 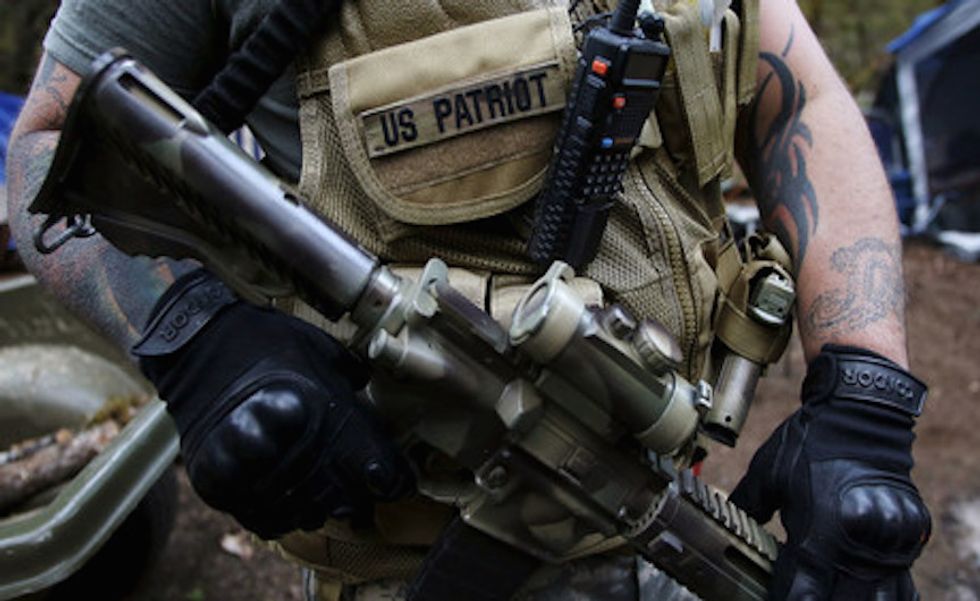 A group of armed men hostile to the federal government occupied a building at the Malheur National Wildlife Refuge in Burns, Oregon, on Saturday night. The exact number of men is unclear: they claim to have over 100 on site; those on the scene believe it to be closer to 12. What is not in dispute is that these men are armed, and they will use force if necessary: One of the armed men, Ammon Bundy, told CNN “if force is used against us, we would defend ourselves.”

But, he added, “We are not terrorists.”

So far, the media is largely in agreement with Bundy – the men are armed, they are hostile to the federal government, they are willing to use force – yet the mainstream media has yet to use the word "terrorist." The men have largely been termed “militiamen” (Reuters), “protesters” (the Washington Post), or “activists” (The New York Times) by prominent media outlets, not terrorists. And, despite the overt presence of weapons and threat of force, the occupation is often described as peaceful.

Law enforcement, too, is taking a cautious approach to the occupation. Officials have not tried to meet the occupiers’ demands or to close in on them. No effort is being made to prevent the occupiers from coming and going at will. This relatively lenient treatment by media and law enforcement has caused some on social media to ask: what if the armed men had been black or Muslim? Shortly after the occupation, writer Elon James White started the hashtag #OregonUnderAttack, to contrast the relatively non-alarmist media coverage to how he would expect media to react if the occupiers were not white. “The first hashtag was #OregonStandoff. I didn’t think that actually captured what was happening. If PoC (people of color) did this  it’d be #OregonUnderAttack,” explained White. “#BLM [Black Lives Matter] has been demonized for so much less.”Other Twitter users rallied behind the hashtag, also comparing the treatment of the Oregon men to that of members of the Black Lives Matter movement. Journalist Roland Martin tweeted,

Did I miss the call for the national guard in Oregon? I recall them in Ferguson and Baltimore. #OregonUnderAttack
— rolandsmartin (@rolandsmartin) 1451795698.0

Adding fuel to the fire, CNN law enforcement analyst Art Roderick explained that the Oregon men were not being treated as harshly as Black Lives Matter protesters and Muslims because they were “not destroying property, they’re not looting anything.” (The vast majority of Black Lives Matter protesters were also peaceful.) British Muslim commentator Mo Ansar used the hashtag to call out the hypocrisy of expecting an entire race or religion to apologize because of the actions of a few. (Such as, famously, when CNN anchor Don Lemon asked Muslim-American human rights lawyer Arsalan Iftikhar if he supported ISIS. Iftikhar, incredulously, asked “Wait, did you just ask if I support ISIS?” as Lemon nodded.) “Moderate white people,” Ansar tweeted, “Speak out – we can’t hear your voices. How will you tackle this radicalisation?” Other hashtags soon caught on a well, challenging the notion that white people cannot be terrorists: #YallQaeda, #YeeHawd, and #VanillaISIS chief among them.

The backlash soon drew its own backlash. “Let me know if any furniture or brochures are injured in this violent #OregonUnderAttack visitor center standoff,” tweeted Bob Owens, editor of the pro-gun website Bearing Arms, who widely ridiculed the #OregonUnderAttack hashtag as alarmist in other tweets.

These tweeters, in focusing on the rural location and the lack of injury, have been seen as ignoring the larger issue of media bias.

As GoBrookyln tweeted in response to the Associated Press’s depiction of the occupation, “@AP When white people with guns takeover a federal building and threaten the lives of fed employees, it’s a peaceful protest.”