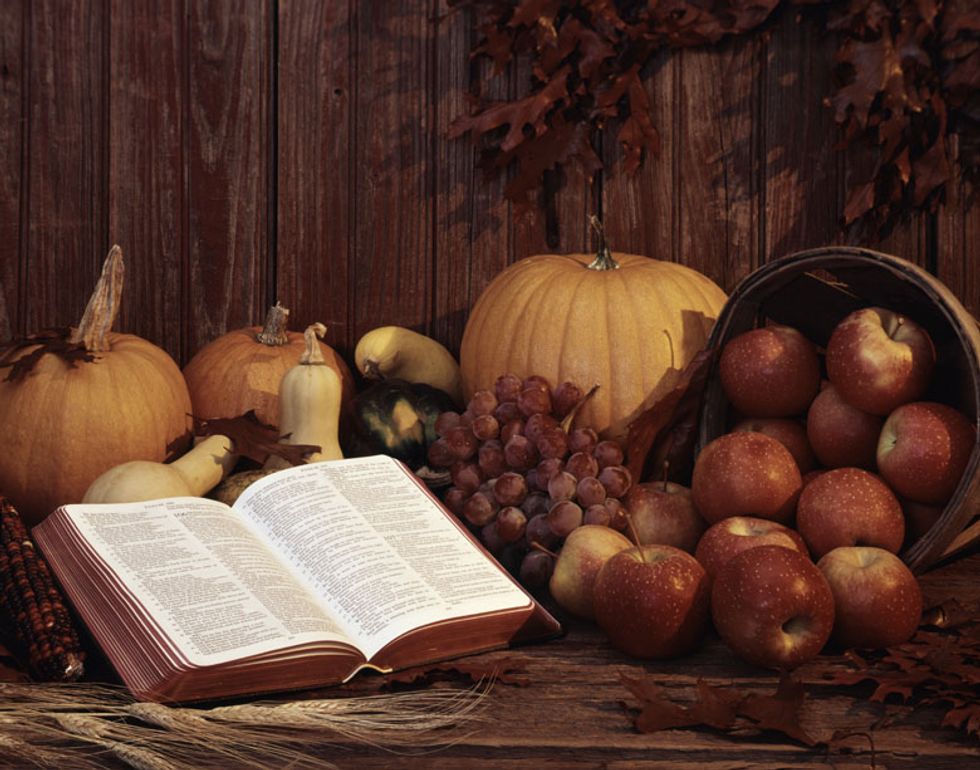 A Bible open next to a Thanksgiving harvest. (H. Armstrong Roberts/ClassicStock/Getty Images)

Happy Thanksgiving! Today we celebrate the gifts of friendship and family with a Thanksgiving meal. Take time to honor where it comes from with the Bible.

The first Thanksgiving between Wampanoag Native Americans and Puritan colonists occurred in 1621 and is sparsely recorded, but forms the basis for the modern celebration. The 3-day celebration occurred in Plymouth, present-day Massachusetts, and was prompted by a good harvest. However, it is unknown if turkey was on the menu. History.com writes:

Celebrate this special day with these inspirational Bible verses for Thanksgiving:

2. "Do not be anxious about anything, but in everything by prayer and supplication with thanksgiving let your requests be made known to God." — Philippians 4:6

3. "And you will say in that day: 'Give thanks to the Lord, call upon his name, make known his deeds among the peoples, proclaim that his name is exalted. Sing praises to the Lord, for he has done gloriously; let this be made known in all the earth.'" — Isaiah 12:4-5

4. "For everything created by God is good, and nothing is to be rejected if it is received with gratitude; for it is sanctified by means of the word of God and prayer." — 1 Timothy 4:4-5

5. "Enter His gates with thanksgiving, And His courts with praise. Give thanks to Him; bless His name." — Psalm 100:4

6. "In everything give thanks, for this is the will of God in Christ Jesus concerning you." — 1 Thessalonians 5:18

7. "Don’t be anxious about anything; rather, bring up all of your requests to God in your prayers and petitions, along with giving thanks. Then the peace of God that exceeds all understanding will keep your hearts and minds safe in Christ Jesus." — Philippians 4:6-7

10. "Let the peace of the Messiah also rule in your hearts, to which you were called in one body, and be thankful." — Colossians 3:15