A recent concert by the Tehran Symphony Orchestra was cancelled 15 minutes before it was scheduled to begin, according to Agence France-Presse. The conductor of the orchestra cited the presence of “female musicians” as the reason for the cancellation.

"The chairs were laid out and everything looked fine,” conductor Ali Rahbari told the AFP. “But before performing the national anthem, all of a sudden they announced women cannot play on stage." 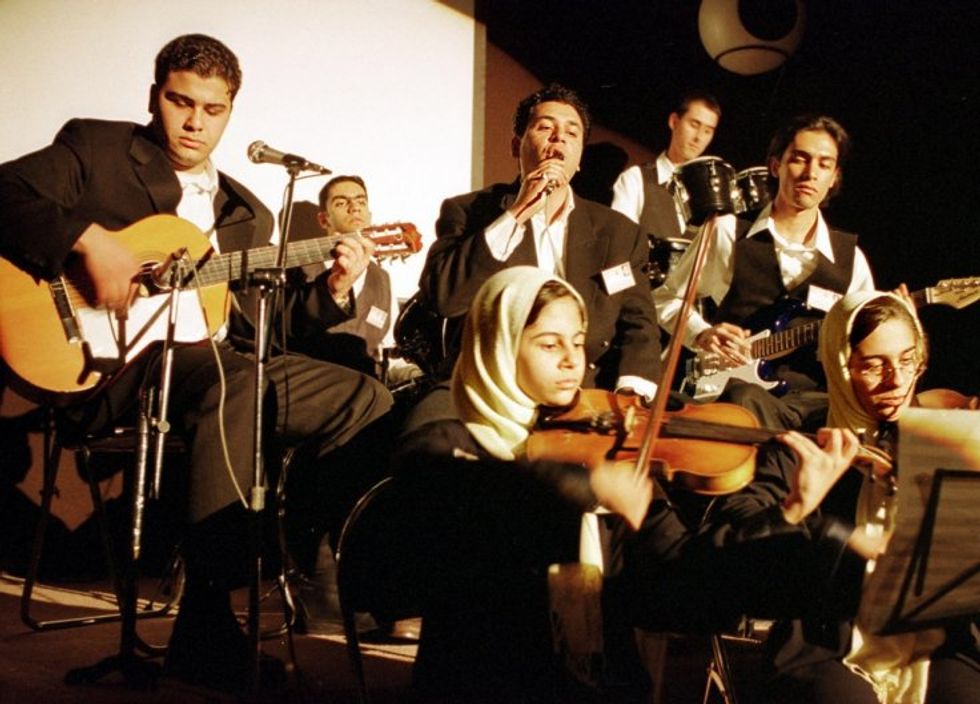 The incident marks the latest in a series of stopped music performances. Artists have voiced complaints about last-minute cancellations that have been enforced despite the events having been approved through official channels. Iranian composer Kayhan Kalhor has stated he will not perform in Iran again following the cancellation of his concert with the American string quartet, Brooklyn Rider, which was called off due to “security reasons.”

“These concerts will not be rescheduled. So long as Iran’s culture and arts are hostages in the ransom-taking and power struggles of political factions and no clear guidelines are defined and enforced for such activities, I will refrain from doing anything in Iran,” Kalhor told the Moosighiye Ma website.

Just 15 minutes before the orchestra was scheduled to play the country’s national anthem, authorities voiced objections to the female musicians’ attire, specifically that they were not wearing appropriate hijab. Rahbari chose to cancel the concert rather than

perform without the women, saying, "The women musicians were going to perform the country's national anthem. Why shouldn't they? I have said many times that I was born in this country and I know very well where the red lines are. As long as I'm the director of this orchestra, I will not allow this kind of treatment.”

The performance would have concluded the Freestyle Wresting World Cup, hosted by Iran. Iran Wrestling Federation head Rasoul Khadem claimed, in a letter to Culture and Islamic Guidance Minister Ali Jannati, that the event’s organizers had not protested the orchestra’s performance.

“In the cultural domain, we believe cultural affairs should be relinquished to the people of culture, and the atmosphere must be facilitated so that consumers and producers of cultural works can meet,” President Hassan Rouhani said of the cancellations. “When a government organization has been delineated as the body to issue licenses, it is not appropriate for others to intervene… When, within the legal framework, a concert is issued a license and people buy tickets, such interventions not only violate the rights of the producers, but also violate the rights of the public.”

But concerts that feature female musicians and vocalists have frequently been canceled by the Iranian Police and the Judiciary of music concerts since Rouhani’s 2013 election.  A father and daughter singing duo in Tehran was prevented from going on when police officers forbade Alim Qasimov’s daughter Ferghana from performing alongside him. Instead, Qasimov was asked to perform alone and said, "I respect Iran's laws but nowhere in the world are women artists treated in such a way."

Democratic Congressman Masterfully Quotes The Notorious B.I.G. in Speech During Trump's Impeachment Trial and People Were Here for It

House Impeachment Managers and President Donald Trump's defense team debated the rules for the ongoing impeachment trial in the Senate. The proceedings lasted for 13 hours and went on until around 2 o'clock in the morning.

Hours into the debate, Congressman Hakeem Jeffries (D-NY) responded to a rhetorical question from Trump attorney Jay Sekulow, who had asked "Why are we here?"

It led to a mic drop moment for Jeffries.

This past December, the House Judiciary Committee held a hearing where it heard from constitutional scholars and legal experts as to whether President Donald Trump's pressure on Ukraine to open politically beneficial investigations warranted impeachment.

Pat Cipollone has served as the current White House Counsel for President Donald Trump since December 2018.

In the current political landscape of the United States, you'd be hard-pressed to find any issue that Americans on which both sides of the ideological spectrum agree.

But it turns out that even on an issue as divisive as the impeachment of President Donald Trump, Republicans and Democrats agree on something.

Things are heating up in the Senate as the long-awaited Senate trial in the impeachment of President Donald Trump is set to begin on Tuesday.

Senate Majority Leader Mitch McConnell will officially propose a resolution that will set the rules for the trial. He released the proposed rules Monday afternoon.