Teens Take Broadway: ‘To Kill a Mockingbird’ Gets 'Scouted' & Reviewed by 11-Year-Old

What does someone Scout's age think of the show? 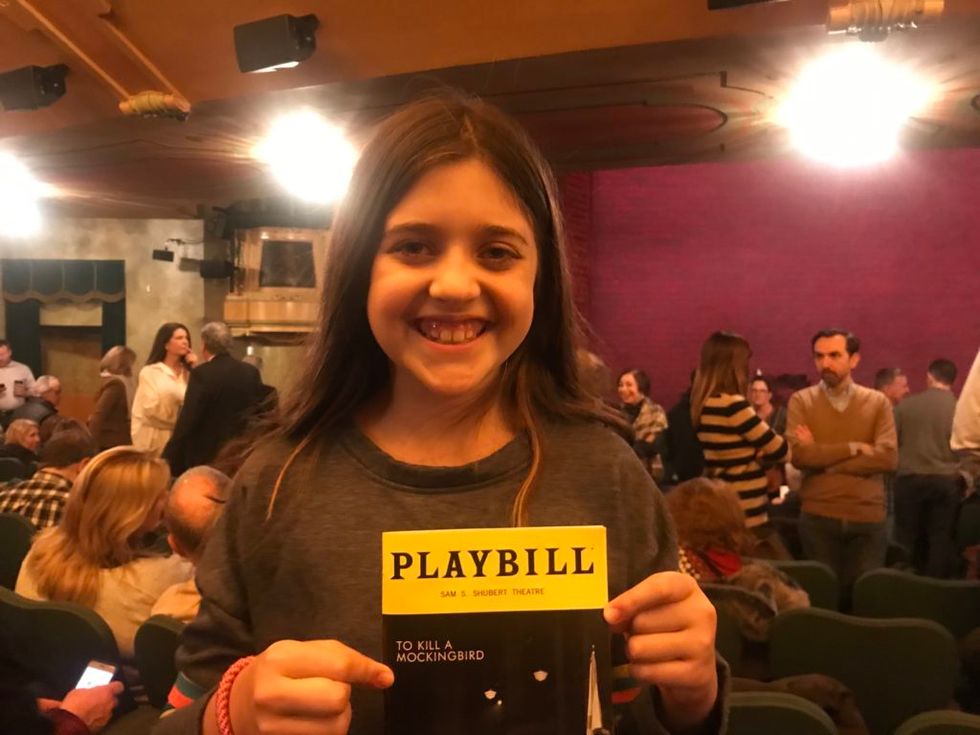 Jewels in the Shubert Theatre posing with her Playbill.

Since its release in 1960, Harper Lee's To Kill a Mockingbird has been controversial—but its controversy on Broadway has taken another form. As the Wall Street Journal writes, "Almost a year ago, the Broadway-bound production of To Kill a Mockingbird... was on shaky ground, at least legally. The author’s estate had sued producer Scott Rudin’s company, saying its theatrical version departs from the spirit of the book."

However, the play, penned by the Oscar and Emmy-winning writer Aaron Sorkin, is now booming. In December, it broke a box office record—taking in $1,586,946 and smashing the house record at the Shubert Theatre for the highest weekly gross of any Broadway play in the Shubert Organization's 118-year history, reports Playbill.

But at the center of it all is the message of the story, which centers on 6-year-old Scout Finch and 10-year-old Jem—older by the time the story ends.

It made us wonder, how does someone in that age bracket view the Broadway blockbuster?

That's why we had 11-year-old Jewels write a review:

In January I went to see the play "To Kill a Mockingbird."

I would rate it 8.5 out of 10. One reason why I would rate it like that is that it was a bit confusing and they made a mistake with the set. This messed up one of the scenes and when the cast tried to redo the scene, they changed the words they used which confused me and made me think “did they actually rehearse that scene” because they said it differently.

The age group that I would say would like the show "To Kill A Mockingbird" would be 10+. I think this because younger kids would probably think it is confusing and a little bit scary because there is some violence.

The play included how racism stayed even when it was legally outlawed. I liked it because they showed the truth that people judge other people because of what is on the outside, but it is the inside that counts. When I was little my mom taught me the saying that beauty is in the eye of the beholder. So it was good the play did not lie about the past even though it is so sad to think that other people judged each other because of how they looked.

The To Kill A Mockingbird characters were amazing actors but they changed Dill’s age. Dill is older in the play than in the book. My one change they could have made is they said that Boo Radley was skinny, but when he comes out he is a large man that had already been seen as a different important character earlier in the play.

I really liked "To Kill a Mockingbird" and would recommend it to anyone who has not seen it.

Do you have a teen who has seen a theatre production recently that wants to write a review and send us some pix? Reach out to us here!