The Surgeon General Just Issued Its First Advisory in 13 Years, This Time to Combat the Opioid Epidemic 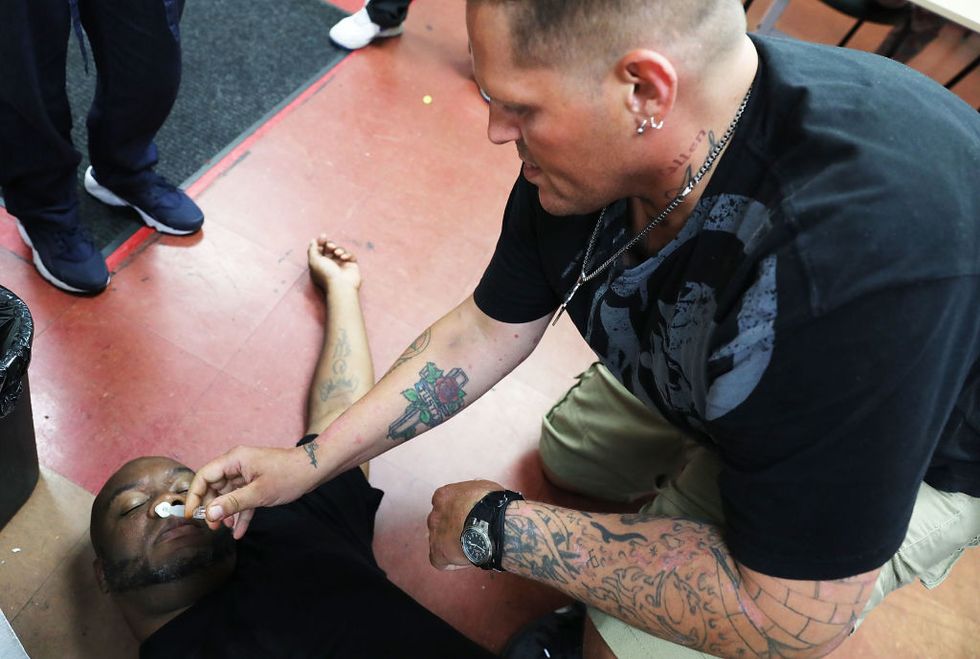 Justin, a participant in a class on opioid overdose prevention held by non-profit Positive Health Project, practices with Naloxone on teacher Kieth Allen on August 9, 2017 in New York City. The weekly class offers individuals free training with Naloxone and everyone receives an overdose kit on completion of the hour course. According to the latest data available from the National Institute on Drug Abuse, nearly 35,000 people across America died of heroin or opioid overdoses in 2015. (Spencer Platt/Getty Images)

As the opioid epidemic continues to ravage many Americans, aggressive tactics are being used to fight back. Earlier this month, the Surgeon General issued a statement urging Americans to start carrying the opioid overdose antidote, known as naloxone.

This is the first Surgeon General warning that has been issued in over a decade. The last warning issued referred to drinking during pregnancy.

The drug, which is commonly referred to as Narcan, can very quickly reverse suppressed breathing in an individual suspected of an opioid overdose. Essentially, naloxone puts the drug user into instant withdrawal, as it works quickly to reverse the physical and psychological effects of any opioid.

Surgeon General Dr. Jerome Adams stated that "knowing how to use naloxone and keeping it within reach can save a life. Research shows that when naloxone and overdose education are available to community members, overdose deaths decrease in those communities."

Naloxone is a powerful tool currently used by police officers, first responders and other emergency medical professionals, and is critical in fighting the deadly opioid epidemic. To have the Surgeon General issue an official warning places opioid abuse and opioid overdose in the mainstream public narrative.

"You're basically saying, as a doctor, 'I'm giving you this opioid for your pain, and by the way, you might kill yourself, so here's this as well’. The next step in this would be truly defining who is high-risk and should be getting Narcan along with their opioid prescriptions,” he said.

Using these medications to reverse the effects of overdose is just one important tool in combating the addiction crisis.

Some have argued that focusing on widespread naloxone distribution grants permission to active addicts to continue to use and abuse drugs. This is part of the destructive stigma surrounding addiction.

Thankfully, a great deal of the social media response to the availability of narcan/naloxone has been positive. Many people are arguing that narcan/naloxone should be widespread and readily available, as a practical method for tackling the crisis.

"The surgeon general is addressing a new reality in a practical way by encouraging people to have access to naloxone and to know when and how to administer it. I equate having naloxone at the ready to having a CPR kit at the ready: Both can save lives as emergency care if administered in time.

No one would find it strange if a surgeon general encouraged more people to learn CPR or the Heimlich maneuver. When we speak of opioid addicts, we need to remember that addiction is a disease. We want addicts to get into recovery, and if they die from an overdose, that can't happen. Keeping them alive long enough for them to make headway with addiction treatment is crucial, and naloxone is often a key component to achieving that goal," said lawyer Jeffrey Simon, in a statement to CNN.

That’s the key—overdose medications should not be controversial or optional. In order to promote sobriety and recovery for addicts, we must first save their lives. Narcan/naloxone allows an opportunity to fight this insidious disease head on.