Oh Dear God They're Making A 'Grease' Prequel, And I Think We All Know How This Is Going To End 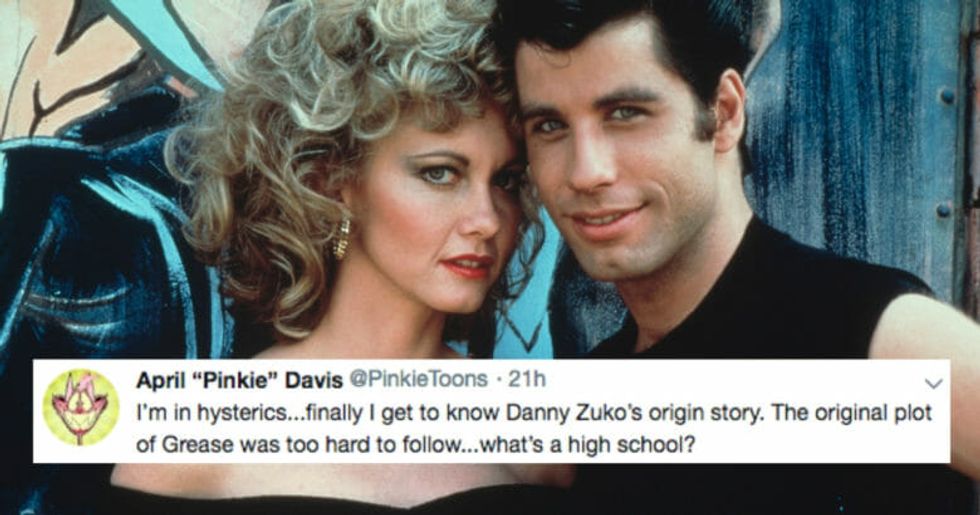 Well, it's official: we, as a species and a culture, have run out of ideas.

So there's a Grease prequel coming. It's being produced by Paramount, written by Big Fish, Charlie and the Chocolate Factory and the original Aladdin scribe John August, and it will be titled--

It will be titled Summer Loving.

As the name suggests, the prequel will tackle the story of how sweet, innocent Sandy Olsson (played by Olivia Newton-John in the original) and bad-boy greaser Danny Zuko (played by John Travolta) met and embarked on a whirlwind summer romance or whatever.

But if you've ever seen the original Grease, you may be saying, "This entire story is literally covered in full in one of the movie's opening numbers why do we need this..."

And you would be correct! I mean Danny and Sandy give us all the details, why is this happening?! Who asked for this?! WHO WANTS THIS?!

I'll tell you who: people who stan the execrable Grease 2. These are the same people who stan Home Alone 2: Lost in New York and Sister Act 2: Back in the Habit as if the first movies, both of which are perfect, never even happened. I, for one, am tired of being subjected to the whims of their bad taste.

ANYWAY. You may remember that Sandy and Danny give wildly disparate accounts of their fling--hers is sweet and romantic and Danny's is like the PG-13 version of Letters to Penthouse, an encounter about which one of Danny's idiot's in waiting asks, "Did she put up a fight?!"

The prequel will tackle this story, supposedly, by settling once and for all how that romance went down.

But at this point in our long national struggle with gender dynamics it should be crystal clear that SANDY'S ACCOUNT IS WHAT REALLY HAPPENED SO THERE, AUGUST, I WROTE YOUR MOVIE FOR YOU. I mean we do not need this. Nobody needs this!

Here's a pitch: how about a #MeToo-themed prequel where Sandy sues Danny for sexual harassment and defamation? Now THAT'S a movie!

Anyway, the internet had some opinions about this forthcoming prequel, too:

A grizzled, elderly man sits outside a dilapidated mobile home. He wears a cannula and a scowl. An oxygen tank stan… https://t.co/YQw6sIWr6u
— Mark Harris (@Mark Harris) 1554842605.0

I played every T-Bird except Danny Zuko back in high school. Please keep that in mind when casting. I have zero con… https://t.co/uuYvrUMBWR
— Max Singer (@Max Singer) 1554841127.0

But at least one person came up with an actually good idea:

WHERE CAN WE BUY TICKETS?!?!