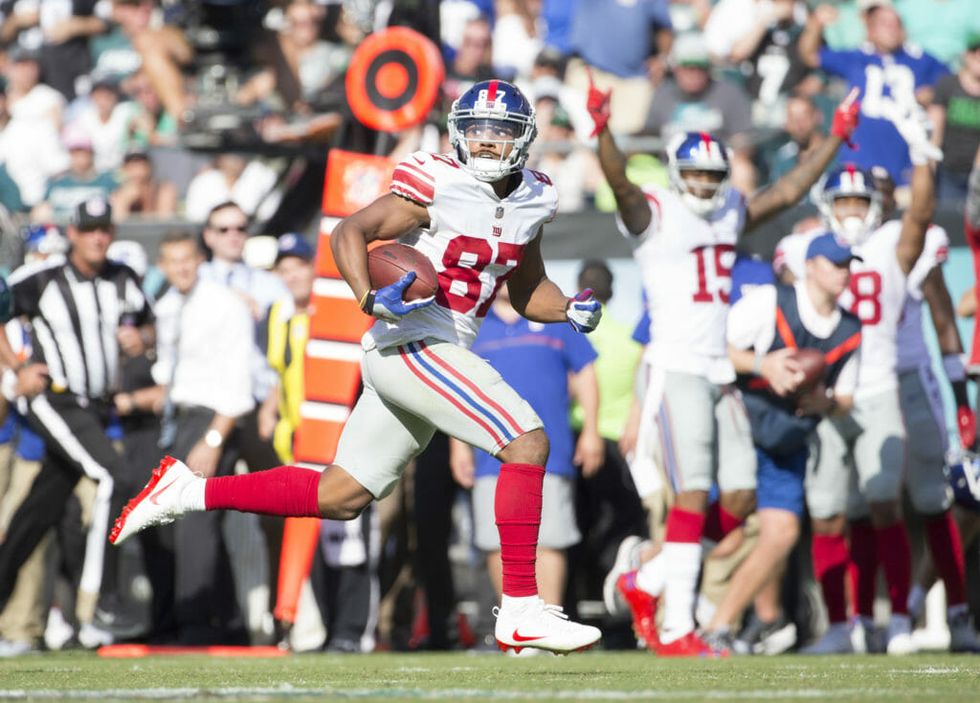 PHILADELPHIA, PA - SEPTEMBER 24: Sterling Shepard catches a pass and runs for a touchdown against the Philadelphia Eagles (Mitchell Leff/Getty Images)

Sterling Shepard may be one of the best fantasy football trade targets out there as we approach the standard fantasy trade deadline. I'll even go so far as to say he could be a top ten wide receiver for the rest of the season. There's a good chance his owner views him as a WR2, so if you're smart about it, you could make a key pickup for your playoff run.

When the season opened, Shepard was set to be the Giants' third-string wide receiver. But because of major injuries to Odell Beckham Jr. and Brandon Marshall, Shepard sits firmly atop New York's depth chart at the position. He's dealt with his own injuries, there's no reason to think he's not healthy now, particularly after a monster Week 10 performance in which he caught 11 of his 13 targets for 142 yards.

What makes him elite?

At first glance, it seems hard to justify viewing Shepard as a WR1. After all, he's only scored double-digit fantasy points twice so far this season. But early in the year he had to compete with two star players for targets. Since then, he's spent the majority of his time recovering from injuries. His breakout Week 10 may be the new norm rather than an outlier. Here are a few reasons Shepard will be an elite fantasy wideout for the remainder of the season...

Game Flow- The Giants are terrible this year. Their defense is subpar, and they don't really have much of a run game. They're unlikely to suddenly start winning any time soon, so we'll see them play from behind often. As smart owners know, this means a lot of passing, and that's good news for Shepard.

Target Volume- Eli Manning a good bet to make a lot of pass attempts from here on out. Shepard figures to be not only his prime target, but really his only viable option outside of tight end Evan Engram. It may not be 13 every single week, but double-digit targets in every matchup from here on out is practically a given.

Touchdown Regression- Shepard has scored a whopping one touchdown this season. That's going to regress; expect to see him find the end zone more often from here on out.

Strength of Schedule- This part is sweet. Shepard has a pretty favorable schedule moving forward, particularly through the fantasy playoffs. Check it out below! The number in parentheses is the opposing defense's rank against wide receivers, with 1 being the worst and 32 being the best.

Your league (hopefully) doesn't play into Week 17, so you can look past the Redskins matchup

Don't trade give up too much value to acquire Shepard. But if you can get him at the price of a WR2, pull the trigger; you'll probably be one happy fantasy owner the rest of the way. If you already own Shepard, you're in luck. If you don't, start making your offers to his owner ASAP.