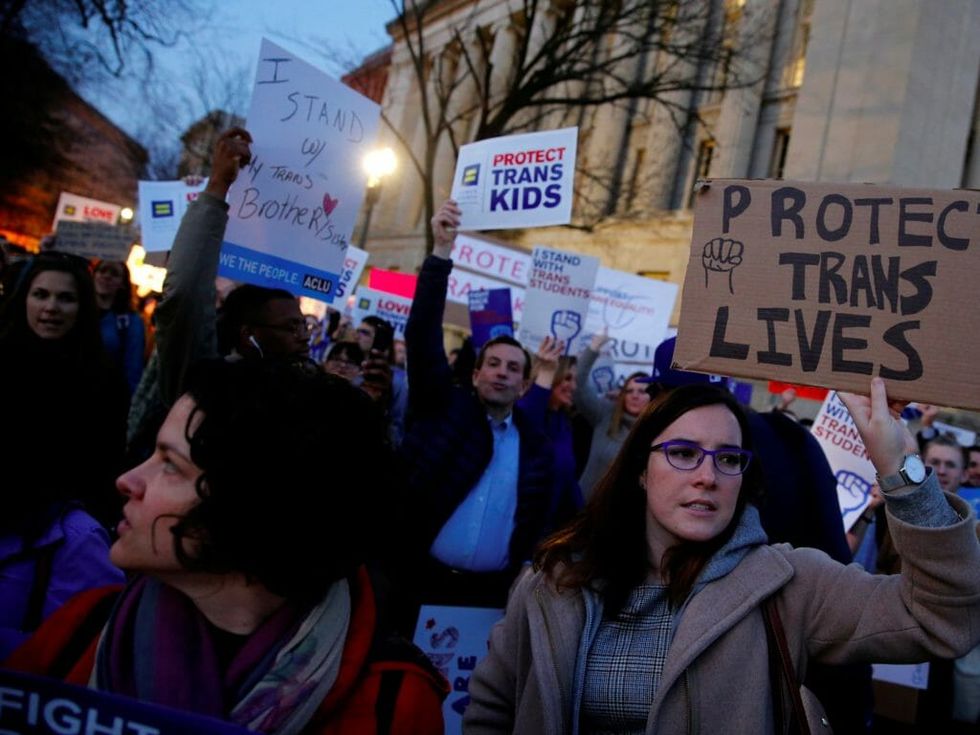 President Donald Trump, with strong backing from Attorney General Jeff Sessions, withdrew the Obama administration's letter of guidance protecting the rights of transgender students to use the bathroom of their choice. The Trump administration's action directly contradicts comments Trump made during the presidential campaign.

Debate over the issue raged after North Carolina's legislature passed a law that would force transgender students to use the bathroom matching their birth certificates. In response, candidate Trump said, “People go, they use the bathroom that they feel is appropriate. There has been so little trouble.”

The administration’s action required the sign-off of Betsy DeVos, the secretary of education. Reports from CNN say that she opposed the withdrawal, possibly because of the potential harm to transgender students. The New York Times suggests that Sessions pushed for the change to try to end the court cases involving transgender students’ rights before the courts require clearer protections. The Supreme Court is scheduled to hear a related case on March 28.

"We have a responsibility to protect every student in America and ensure that they have the freedom to learn and thrive in a safe and trusted environment. This is not merely a federal mandate, but a moral obligation no individual, school, district or state can abdicate,” DeVos said in a statement when the policy change was announced. “At my direction, the department's Office for Civil Rights remains committed to investigating all claims of discrimination, bullying and harassment against those who are most vulnerable in our schools."

The administration’s actions leave the decision about how to treat transgender students in the hands of state and local entities. As a result, states and districts around the country are making public announcements standing up for the rights of their students.

Some states have existing laws in place to protect students, including California and Colorado. Colorado’s 2008 law forbidding discrimination based on sexual identity and gender identification will continue to protect the rights of students in that state. The law's application to students was challenged in 2013, and the courts found that the school involved was violating student rights.

One Colorado, an LGBT advocacy group, responded to the yesterday's announcement:

“This is a serious attack by the Trump Administration on transgender students; opening them up to harassment, discrimination, and violence in their schools. No student should ever have to go through the experience of feeling unwelcome at their school or college campus. Luckily, Colorado has been on the right side of this issue for years, by including sexual orientation and gender identity in its non-discrimination law, passed in 2008.”

Iowa issued a reminder that Title IX protections  and Iowa Code require "that they have a responsibility to ensure equal treatment for all students." The statement ended with the reminder that schools and districts need to "make sure your anti-discrimination policies include gender identity discrimination" and that "you train your staff about gender identity issues."

Attorneys General in Washington, New Mexico, and New York also spoke out against the decision.

Colleges and school districts states with and without state laws supporting the rights of students have also spoken out. Portland State University will continue its existing policies. New York City Schools issued the following statement:

The principal of Kettering, Ohio's Fairmont High School told the Dayton Daily News that he plans to continue to allow students to use bathrooms that match their identity. The school recently added partitions to its restrooms to allow students more privacy and safety. Kettering is located in Montgomery County, one of the areas that switched from blue to red in the 2016 election. Ohio has no state laws protecting transgender students.