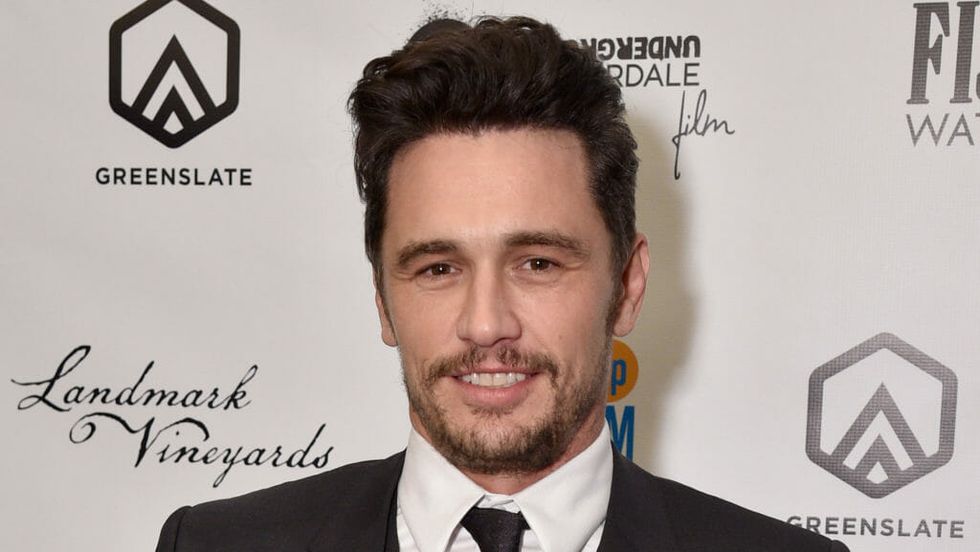 Tonight, James Franco will be hosting SNL with R&B singer SZA as musical guest. Franco's hosting gig comes just one week after the release of The Disaster Artist, based on Tommy Wiseau's cult film. Franco produced, directed, and stars in the movie, which has received rave reviews from critics.

In the teaser for tonight's episode, Franco is seen approaching the Rockefeller ice skating rink to the tune of Olympic-like music. He nods at the camera, suggesting he's about to pull off some insane skating skills... only to take his first step on the ice rink and immediately fall.

Franco Is Promoting His Latest Film, 'The Disaster Artist'

In a recent interview with Popcorn With Peter Travers, Franco said, "Once I saw that there was this incredible story behind this 'bad movie' I knew that I would be able to tell a Hollywood story unlike any other... There was this universal story underneath about dreamers and outsiders that everybody could relate to, that I certainly related to myself. Everybody comes to Hollywood. And everybody that comes there has a dream to make it.”

The Disaster Artist was released by A24 in only 19 theaters, and raked in $1.2 million during opening weekend. According to Deadline, it made $700k in its opening weekend.

Franco says that he immediately knew The Disaster Artist was the right story for him to tell-- he says he identified with it, and felt he knew it was what he wanted to focus his attention on. As for his brother, Dave's role, Franco says, "I wanted my brother to play Greg Sestero because I just think he’s a great actor and we had the right dynamic for it.”

And just who is tonight's musical guest, SZA? The 27-year-old released her debut album, Ctrl, earlier this year. It debuted at No. 3 on the Billboard Top 200 and includes the song "Love Galore", featuring Travis Scott.

SZA, whose real name is Solana Imani Rowe, is a singer-songwriter from St. Louis, Missouri, and released her debut EP, See.SZA.Run, in October 2012. In 2013, she signed with hip hop record label Top Dawg Entertainment. This marks her first appearance on SNL.

Tonight is the penultimate SNL show. Last week, Saoirse Ronan took the stage with musical guest U2. Next week, Kevin Hart will host, along with the Foo Fighters.