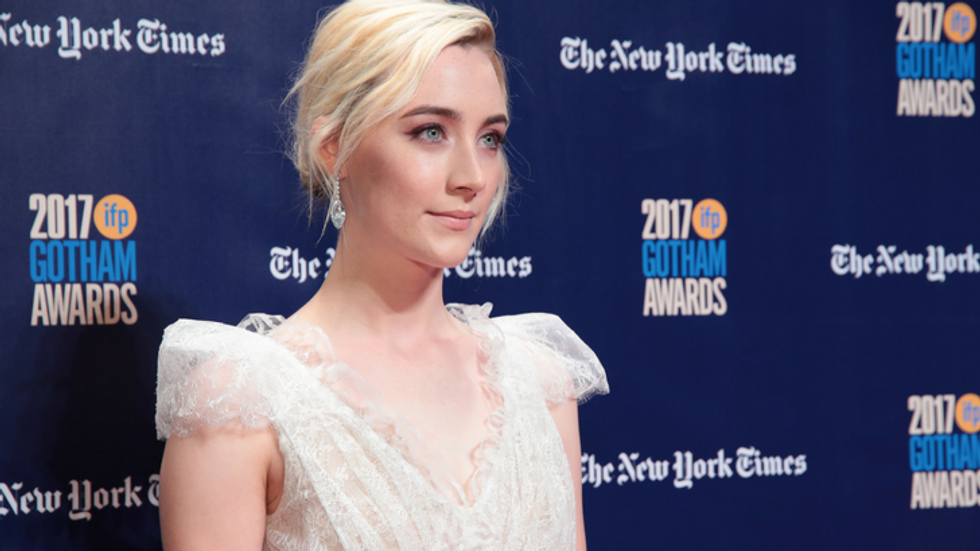 Tonight, Saoirse Ronan will be hosting SNL with musical guest U2.

In a promo for the episode, Ronan tries to convince Cecily Strong that everyone at Rockefeller Center is there to see her host SNL. Strong counters that they're just there to see the tree. "This is so exciting. All these people have come out to see me," Ronan exults. Strong responds, "Oh, no, you know I think they're here for the tree lighting."

Ronan, 23, has been making headlines for her starring performance in the film Ladybird, which is receiving Oscar buzz from critics and fans alike. This week, the film became the best-reviewed movie in Rotten Tomatoes' history.

Ladybird was released on September 1, 2017, and was written and directed by Greta Gerwig (who has also received Oscar buzz in the "Best Director" category). Along with Ronan, the film stars Laurie Metcalf, Tracy Letts, Lucas Hedges, Timothée Chalamet, Beanie Feldstein, Stephen McKinley Henderson and Lois Smith. Earlier this week, it was named Best Picture by the New York Film Critics Circle, and Ronan took home the award for Best Actress. Based on its buzz and accolades thus far, Ronan seems to be a shoo-in for a Best Actress nomination at the Oscars in March.

Joining the Irish actress tonight will be the Irish rock group, U2, who just released their new album, Songs of Experience, on Friday. This marks Bono and the band's fourth SNL appearance, and the first since a 2009 episode of SNL, which was hosted by Megan Fox.

On Friday, NPR reviewedSongs of Experience, saying it is the "reboot" U2 has needed. "... for the most part, the reboot works: What came across as pompous and contrived last time now registers as earnest, genuine — and even a little bit scrappy." Rolling Stone's review states that with its new album, U2 has "reconnected with the power of music."

U2 formed in Dublin in 1976, and consists of Bono on lead vocals, The Edge on lead guitar/keyboard, Adam Clayton on bass guitar, and Larry Mullen Jr. on the drums. U2 has released 14 studio albums over their illustrious career, with 22 Grammy wins. They were inducted into the Rock and Roll Hall of Fame in 2005.

Who Is Hosting Next Week?

Next week, James Franco will be hosting SNL. The actor's latest film, The Disaster Artist, was released on December 1, and has received rave reviews from critics so far.

The musical guest for Franco's episode will be SZA. The R&B singer-songwriter released her debut studio album on June 9, 2017 — it received several Grammy Award nominations.