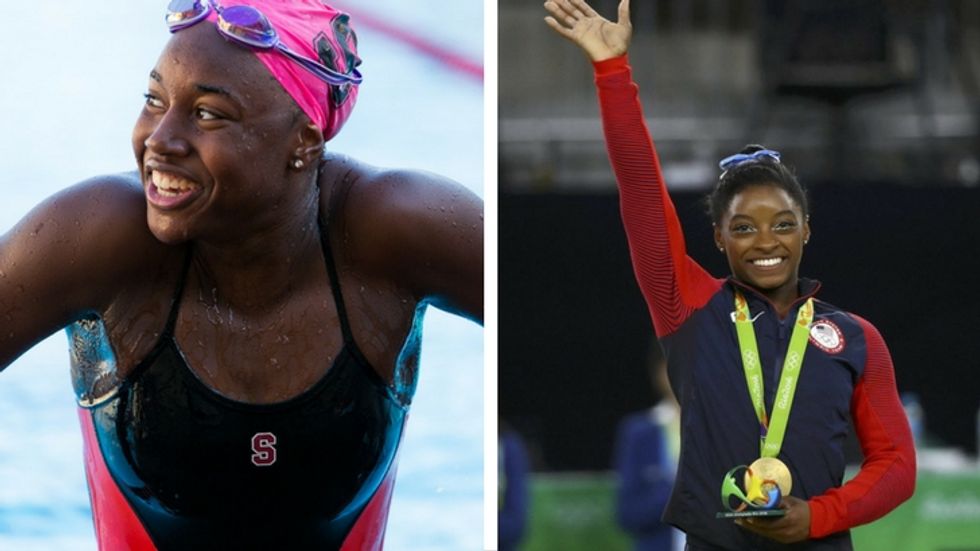 Simone Manuel, 20, made Olympic history in Rio last night as the first African-American woman to win an individual gold medal in swimming. She shared her victory with Penny Oleksiak, her Canadian competitor: Both swimmers finished the women's 100-meter freestyle in the same instant, finishing the race with a time of 52.70 seconds, shattering a world record set by Australia's Cate Campbell in the semifinals only the day before. Olympic scoring rules decreed both swimmers would get a gold medal, but that there would be no silver medalist. Sweden's Sarah Sjostrom, who finished 0.29 seconds behind the winners, received the bronze medal.

Manuel, who says she trained for four years "day in and day out," attributed her success to "my coaches and my teammates who have pushed me to never give up." She admitted she did not think she would win a gold medal individually. "My goal was just to get more experience, swim as fast as I can. And after prelims and semifinals and seeing where I was sitting, when I came in tonight I was like, 'I want to get on that medal stand.' Just surpassing that goal and getting an American record on top of a gold medal is super exciting for me." The win gave Team USA their first gold medal in this event since 1984, which, coincidentally, was also a tie, this one between Nancy Hogshead and Carrie Steinseifer.

In an emotional statement to interviewers post-race, Manuel said her victory holds particular significance in light of inflamed racial hostilities in the United States. “It means a lot, especially with what is going on in the world today, some of the issues of police brutality,” Manuel said. “This win hopefully brings hope and change to some of the issues that are going on. My color just comes with the territory.” On a more personal note, Manuel admitted she has "struggled a lot" reconciling her racial identity with her achievements in the water. “Coming into the race I tried to take [the] weight of the black community off my shoulders. It’s something I carry with me. I want to be an inspiration, but I would like there to be a day when it is not ‘Simone the black swimmer.'"

Another Simone also made headlines: 19-year-old Simone Biles, who captivated audiences with her stunning performance in the women's all-around semifinals in gymnastics, was crowned the world's best gymnast after winning the gold medal in the finals for the same event. Biles won the competition with a 62.198 total score for first place, ahead of her teammate, Aly Raisman, who took the silver medal with a 60.098 score for second place. Aliya Mustafina of Russia won the bronze medal with a total score of 58.665. Biles's winning margin––2.1 points––is larger than the margin of victory from the 1980 to the 2012 Olympics combined. She is also the first woman to hold the world and Olympic all-around titles at the same time.

Biles's beaming parents congratulated her on her success. "Simone has made us double proud. She just blew us away. You asked me when it felt like to be the father of an Olympic gold medalist and I couldn’t answer you," Ronald Biles said. "Tonight she’s got two gold medals and I still can’t describe it. I just want to see her and hug and kiss her. We haven’t been able to see her even when she got her first gold medal. That has been tough." Simone has "worked for this and dreamed of it," Nelly Biles said. "And now it is here, all I can say is [that] she deserved it."

Biles, who wept openly after her win, spoke to reporters following the medal ceremony. She is still, she says, in awe. "You never know the feeling until it hits you," she said. But it was her reflection on personal identity and statement on commentary from members of the press who've compared the success of female athletes to that of their male competitors that piqued her audience's interest. Like fellow Olympian Simone Manuel, Biles addressed the necessity of having her achievements celebrated solely on their own merits.