Silicon Valley Tech Firms Are Phasing Out Their Free On-Site Cafeterias, and for a Very Good Reason 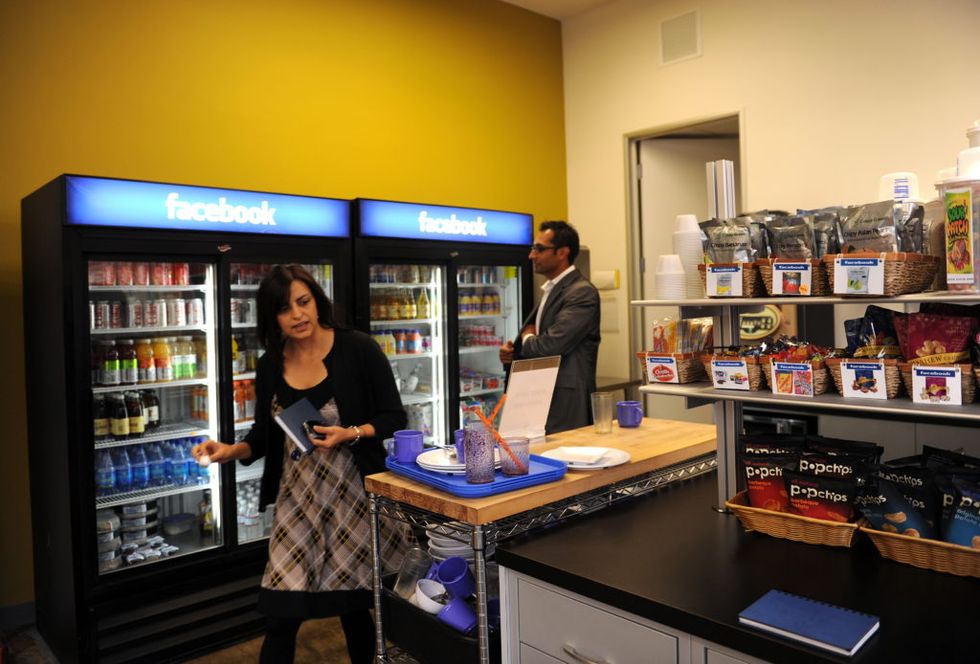 Employee have a break lunch at the Facebook headquater in Palo Alto, California on May, 25, 2010. Facebook overhauled its privacy controls on Wednesday to fend off mounting criticism that it is betraying the trust that has made it the world's biggest social network. AFP PHOTO / GABRIEL BOUYS (Photo credit should read GABRIEL BOUYS/AFP/Getty Images)

Facebook offices are known for their free gourmet cafeterias staffed by former restaurant chefs and featuring ramen bars and on-site smoke shacks. It’s no wonder employees don’t have much interest in wandering off campus for lunch.

Mountain View, Calif., at the southern end of the San Francisco Bay Area peninsula, is gearing up to host a new satellite location for the social media behemoth, headquartered just north in Menlo Park. However, unlike other offices such as the headquarters building itself and the East Coast facility in New York, the Mountain View locale will not boast a free cafeteria with endless desserts, kombucha taps and a carving station.

Why not? Because, critics argue, the lack of foot traffic from workers taking lunch breaks hurts surrounding restaurants, retailers and the local economy in general.

"Restaurants often provide the anchor to get people on the street, and while they're out they patron other retail," Gwyneth Borden, executive director of the Golden Gate Restaurant Association, told Business Insider. "While there will always be competition for the food dollar, it goes without saying that it's hard to compete with free."

In late July, legislators in San Francisco proposed a city-wide ban on workplace cafeterias, inspired by the effect the headquarters for Twitter and Airbnb — which both feature on-site cafeterias —  had on their surrounding neighborhoods. Restaurants that opened in Twitter’s neighborhood, Mid-Market, in the wake of Twitter’s 2012 relocation, have particularly struggled in attracting foot traffic and many have since closed.

“Having (tech workers) in their offices and not engaging with the community isn’t really good for the community or these small businesses,” Chris Foley, co-owner of the Market, a food hall underneath Twitter’s headquarters, toldThe San Francisco Chronicle.

The legislation, if accepted and passed, would be retroactive and apply to new businesses only.

The aim, according to San Francisco Supervisor Aaron Peskin, is to mitigate the “Amazon effect that impacts retail and restaurants across the county,” he told the SF Examiner. “People will have to go out and eat lunch with the rest of us.”

The restriction on Facebook’s cafeteria in Mountain View was actually passed in 2014 but has gained renewed interest now that the offices are opening this fall. Facebook is still allowed to have a cafeteria on site for its Mountain View employees, but meals served there can’t be subsidized more than 50 percent. According to the rule, meals eaten at restaurants open to the public could be subsidized 100 percent.

Other large employers in the area, such as Apple, charge employees for meals eaten at the on-site cafeteria, so there’s more incentive for them to eat at local restaurants. A Google Maps search of Facebook’s new Mountain View office location at the Village at San Antonio Center shows multiple cafes nearby, from Beijing-style hot pot and pho to Middle Eastern staples.

"With food being provided for free…there's no competition in terms of choice, nor a reason for employees to leave their building," Borden said. "Perhaps that's great social engineering to get employees to work longer hours and never leave their offices, but it doesn't do much to support the city around them."