The First Sitting Senator to Give Birth While in Office Is Working to Change U.S. Parental Leave Laws 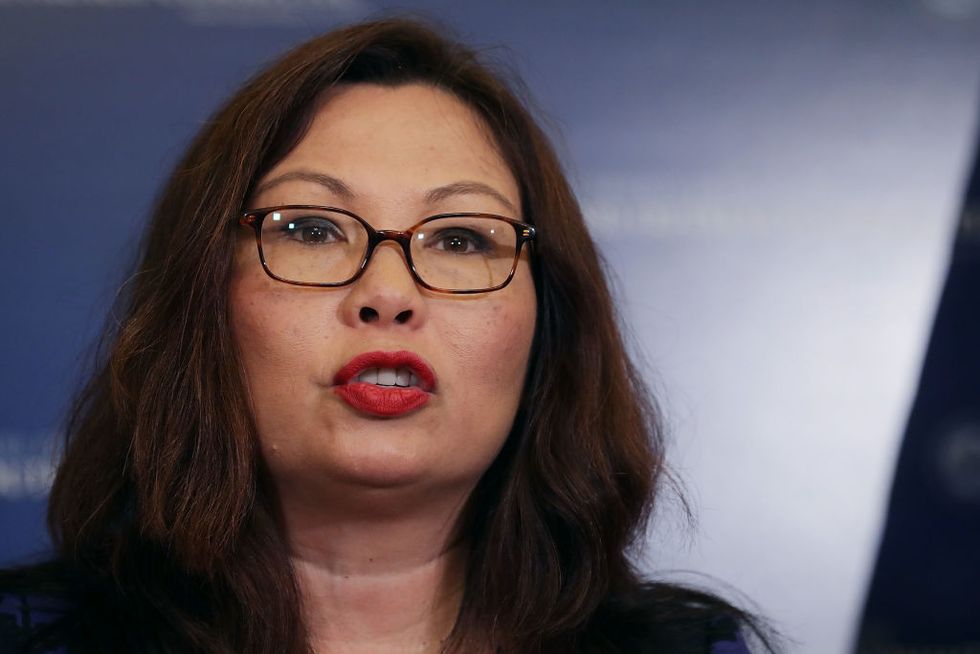 WASHINGTON, DC - JULY 11: Sen. Tammy Duckworth (D-IL) speaks during a news conference about resisting the Trump Administration's Presidential Advisory Commission on Election Integrity with at the U.S. Capitol July 11, 2017 in Washington, DC. Citing no evidence of widespread voter fraud in the United States, Duckworth said the commission is an attempt at voter suppression and a threat to cyber security for America's 200 million registered voters. (Chip Somodevilla/Getty Images)

Trailblazing Sen. Tammy Duckworth (D-Ill.), who on Monday gave birth to a daughter and became the first U.S. senator to give birth while in office, is a woman of many “firsts.” Duckworth is the first disabled female (and only the second female Asian American) to serve in the Senate. As an Army Black Hawk helicopter pilot, she also is one of the first women to have flown combat missions. She lost both legs and significant functionality of her right arm when her helicopter was struck by a rocket-propelled grenade during a mission in Iraq.

And now, with the birth of her second child, Maile, Duckworth may be in line to chalk up another “first:” the first U.S. senator to be able to take her baby onto the Senate floor while the chamber is in session.

Duckworth said in March that she has been working with Democratic party leadership to change Senate rules to make that a possibility.

As reported Monday by The Hill in announcing the birth of her daughter, Duckworth said: “Parenthood isn’t just a women’s issue, it’s an economic issue and one that affects all parents — men and women alike. “As tough as juggling the demands of motherhood and being a Senator can be, I’m hardly alone or unique as a working parent, and my children only make me more committed to doing my job and standing up for hardworking families everywhere.”

Duckworth, who already has a three-year-old daughter, Abigail, with her husband Bryan, has a unique perspective on balancing motherhood and a career. That’s one of the reasons she is working to get the United States to modernize its thinking—and in many cases, catch up with the rest of the world when it comes to parental leave.

As a member of the U.S. House of Representatives in 2015, Duckworth introduced the Military Parental Leave Modernization Act. The act would have allowed both men and women in the service to take 12 weeks of paid parental leave if they are a parent of a newborn, adopted or foster child. (For years the Department of Defense actually offered no maternity leave. New mothers were afforded only six weeks of “convalescent leave.”) Duckworth’s bill never made it to the House floor for a vote, but the military has loosened some of the restrictions on how much time a new parent may be away from his or her unit.

Ironically Duckworth, as a member of the Senate, actually is not entitled to any maternity leave because the Senate has no official parental leave policy.

Each Senate office has its own policy governing parental leave, but those policies apply only to staffers, not the senators themselves. In fact, the United States government has no policy in place to offer leave for any new mother, whether she is a government employee or not. Duckworth has begun citing issues surrounding her pregnancy to help spearhead bipartisan agreement to change the existing rules for members of Congress. She is hoping to pave the way for future members of the legislature who have or adopt children while serving their term.

Duckworth, who returned to Illinois as a House member after the birth of her first child, is planning to stay in Washington this time given the importance of her vote in the 51-49 Senate. The senator said on Politico’s Women Rule podcast that she won’t be able to simultaneously take maternity leave and vote on the floor, and that because of this, she says can’t “technically” take maternity leave. While senators can vote by proxy in committee, they must be physically present to vote on the floor.

"You are not allowed to bring children onto the floor of the Senate at all," Duckworth said on the podcast in February. "If I have to vote, and I'm breastfeeding my child, especially during my maternity leave period, what do I do? Leave her sitting outside?"

U.S. Parental Leave vs. the World

Parental leave advocates are hoping that Duckworth’s unique situation will prod the U.S. to catch up with the rest of the world when it comes to parental leave.

The U.S. ranks far behind other nations in offering maternity or parental leave. In the European Union, new mothers receive a minimum of 14 paid weeks off. The United Kingdom is the most generous, with a whopping 52 weeks of paid leave, 39 of which are paid at 90% of the employee’s earnings. Following a close second is Ireland, with 42 weeks leave, all of which is paid. France, Austria, Spain, the Netherlands and Denmark all offer 14 paid weeks for the mother. Paternity leave in the U.K. is still unregulated, although Finland, Spain and France are generous in their leave policies. Like the U.S., Austria, Germany, Ireland and Switzerland offer no paternity leave.

Cuba and Mongolia offer one year of paid leave for new mothers. Russian moms receive 140 days of paid time off at 100% of their salaries.

Japan is the world leader for paternity leave with over 30 weeks of paid leave for a new father.  Ironically, in 2015 only slightly more than 2% of men eligible for family leave actually took advantage of the entitlement. This is largely a cultural issue since men overwhelmingly dominate Japan’s workplaces.

In Australia, like the U.K., new mothers are allowed a minimum of a year off with pay ($695/week for salaries up to $150K). New fathers get two weeks off and are paid on the same scale as new moms. Further, Australia mandates that the mom’s job must be held for her until she returns to work, which can be up to two years. And she does not have to return to full time; she can opt to work part time.

Australia, in fact, has changed their rules very recently to accommodate new mothers. In the spring of 2017, Senator Larissa Waters, was the first woman to bring her baby to the Parliament where she was needed for a vote. She was also the first woman to breastfeed a baby on the floor of the Australian Senate and she hopes to pave the way for other women who want to be members of Parliament and give birth.

In a recent report, PL+US shed light on the fact that millions of Americans are not offered even a single day off after giving birth or adopting a child. They cite that one in four new moms go back to work after just ten days.

Some of the largest companies in the U.S. offer maternity leave for upper-level employees only.

Walmart, for example, is the nation’s largest private employer and the nation’s largest employer of women. Sixty percent of its approximately 1.2 million hourly workers are part time. But its new paid parental leave policy, announced in January, applies only to full-time employees. What’s more, full-time employees are offered 10 paid weeks of leave but not under a family leave policy. That leave falls under the category of “short-term disability.”

April Bohms Bartlett is a part-time cashier at a Walmart in Dunnellon, Fl. She has four grown children and is seeking to adopt one younger foster child who lives at home. She was part of an employee movement that convinced Walmart to revise its parental leave policy. But she won’t benefit from it.

“Everything is for the full-time workers,” she said. “What about us part-timers? We need the same benefits as full-timers. We’re single parents. What about us? We’re left out of the loop.”