Science fiction novels, television and movies are riddled with wormholes, places where a spaceship can fly through a mysterious field and wind up in a completely different place. While physicists have proposed theories for how we might generate such gravitational wormholes, current technology does yet not allow for the creation of the massive energy required to create such a phenomenon.

In 2007, a group of mathematicians offered suggestions for how to create a “magnetic wormhole” that would begin with a magnetic field in one place and end with the field in another location. To be classified as a wormhole, the space between the beginning and end of the fields would need to be undetectable. Until recently, these theories proved to be unworkable because the space between magnetic fields was not hidden, or cloaked, effectively.

But on September 3, physicists Jordi Prat-Camps, Carles Navau, and Alvaro Sanchez from the Autonomous University of Barcelona published the results of their successful creation of a magnetic wormhole. To mount the impossible, they built a separate area of three-dimensional space using three layers of metamaterials and metasurfaces. Because of the difficulties with previous attempts, the researchers focused their efforts on finding a way to cloak the space between fields. Metamaterials and metasurfaces are created when two existing natural elements are combined and the new hybrid materials act in ways that the existing elements are not capable of on their own. They can even alter physical phenomena such as light and sound.

Recent research into metamaterials conducted at the U.S. Department of Energy’s Lawrence Berkeley National Laboratory and the University of California Berkeley has resulted in the creation of invisibility cloaks that hide small objects by distorting light, making them look

flat, or masking a heat signature. Prat-Camps et al used metamaterials and metasurfaces to build a device outside of normal space to carry and hide a magnetic field.

The magnetic wormhole was created with three layers: a ferromagnetic sheet, made from materials that are unusually easy to make into strong magnets, was wound into a spiral, surrounded by a superconducting sphere, enclosed by a ferromagnetic metasurface similar to the ones used to manipulate light. Ferromagnetic materials are among the best at supporting a magnetic charge within themselves (highly permeable), while superconductors have low permeability. 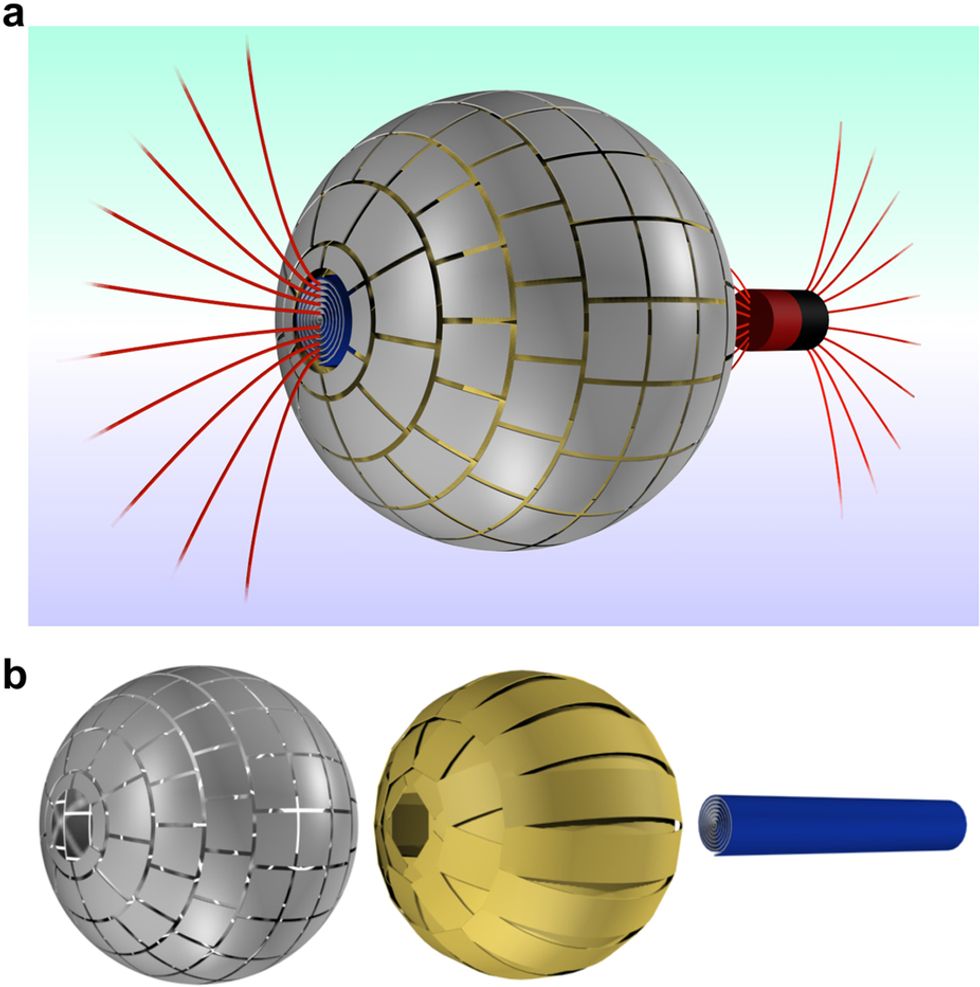 via Nature (a) The field of a magnetic source (right) is appearing as an isolated magnetic monopole when passing through the magnetostatic wormhole; the whole spherical device is magnetically undetectable. (b) The wormhole is composed of (from left to right) an outer spherical ferromagnetic metasurface, a spherical superconducting layer, and an inner spirally wound ferromagnetic sheet.

This magnetic wormhole isn’t just a fun bit of science fiction come to life. Prat-Camps et al suggest that it has the potential to change medicine. The magnetic fields projected through it could eventually allow doctors to perform simultaneous MRIs on a patient since the magnetic fields used in the imaging would not intersect. The authors also believe magnetic wormholes could be used in engines or electric energy generators. As research continues, scientists and researchers may find more practical applications.

The goal of the force is to protect United States assets in outer space from foreign rivals and is slated to cost around $2 billion in the next five years.

Today, Trump unveiled the official logo for the Space Force, but people think it bears a striking resemblance to another iconic symbol.

People were stunned this past July when President Donald Trump tweeted that four Congresswomen of color—Reps. Ilhan Omar (D-MN), Alexandria Ocasio-Cortez (D-NY), Rashida Tlaib (D-MI), and Ayanna Pressley (D-MA)—should "go back" to where they came from.

He also falsely claimed they "originally came from countries whose governments are a complete and total catastrophe..."

Three of the Congresswomen were born in the United States. Omar was a refugee from Somalia. All are Americans.

At a campaign rally days later in North Carolina, President Donald Trump mentioned Congresswoman Omar—and got a strong reaction from the crowd.

While bigotry is common at a Trump rally, it became even more blatant when Trump's supporters began chanting "Send her back," echoing the calls from Trump's tweet for them to "go back" to where they came from.

Fox News Is Covering Trump's Impeachment Trial in the Most Fox News Way, and People Are Calling Them Out

As Democratic House impeachment managers make their case against President Donald Trump, one of his favorite news networks is going to lengths to keep the bevy of evidence against him from reaching their viewers' ears.

At first, Fox News tried scrolling Trump's so-called accomplishments alongside live video of the historic proceedings. Now, the network's latest attempt to distract from the Democrats' arguments is raising eyebrows even higher.

Lieutenant Colonel Alexander Vindman was one of the first witnesses in the House of Representatives' initial impeachment inquiry into President Donald Trump.

The administration of President Donald Trump relies on its white Evangelical base to keep its support consistently hovering around 40 percent.

In keeping with this, President Donald Trump often invokes anti-abortion values he claims to hold dear. He's falsely claimed that Democrats are determined to rip babies from their mothers' wombs and that parents often discuss with their doctors whether or not to keep the baby...after the baby is born.

These claims are patently false, but they rile up the base.

Education Secretary Betsy DeVos seems to be playing right along in promoting abortion hysteria, if a recent speech is any indication.

After hours of evidence presented by the House Impeachment managers in the Senate trial against President Donald Trump, Senator Lindsey Graham (R-SC) strayed even further into the abyss of fanaticism as he defended the President to reporters.

Graham, a Trump critic turned ally, didn't attempt to refute any of the myriad evidence laid out by Democrats, but instead dismissed the claims that Trump did anything wrong when he withheld congressionally approved aid from Ukraine in exchange for an investigation into his political rival.