Man Regains Minimal Consciousness After 15 Years in a Vegetative State 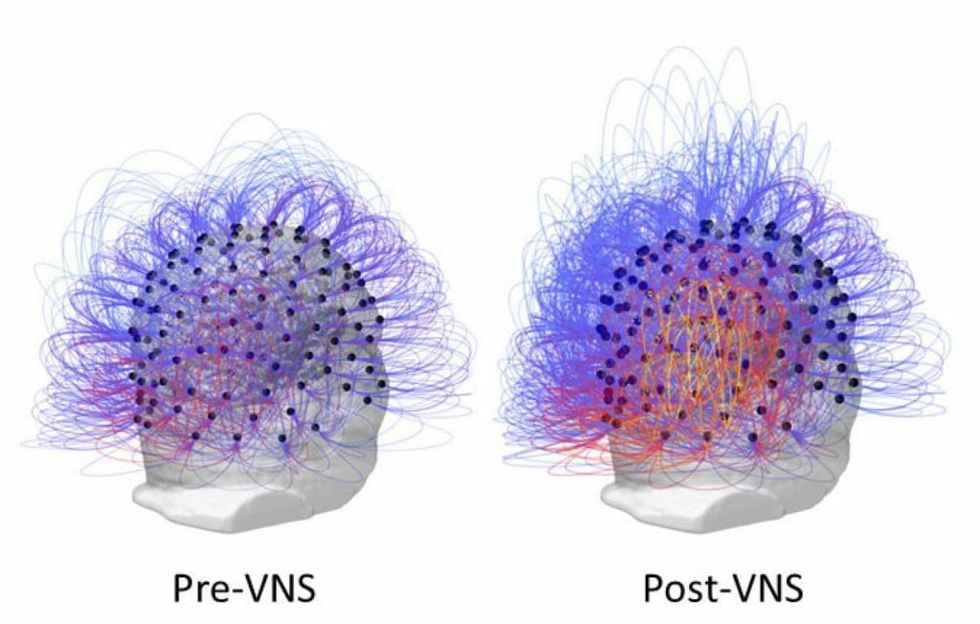 Despite some of the most significant advances in brain research in the past decade alone, consciousness — and the brain’s role in it — are still areas of constant discovery. As an example, French researchers from the Institut des Sciences Cognitives (ISC) Marc Jeannerod in Lyon, France, were able to revive the brain of a 35-year-old man who had been in a vegetative state for 15 years to a state of minimal consciousness through vagus nerve stimulation (VNS). They publishedtheir results last month in the journal Current Biology.

People in a vegetative state still typically breathe on their own and have periods of wakefulness (unlike a coma in which they are unconscious the entire time) but are usually unresponsive to external stimuli and don’t communicate. “They don’t have a presence in the world,” study leader, neurologist Angela Sirigu, toldNational Geographic. On average, after about a year in a vegetative state, the chances of recovering brain function arequite low, which makes the French patient’s improvement remarkable.

The unnamed patient damaged his brain in a car crash 15 years before. Until the treatment, he had not shown any sign of consciousness or purposeful movements. He did not respond to doctors or family when they visited. After Sirigu and her team implanted the VNS device — commonly used to help prevent epileptic seizures, they were awed by a dramatic increase in neurological activity and signs of consciousness.

According toArs Technica, the patient began to move his eyes toward people when they talked to him, and could even follow a moving mirror. He turned his head to follow a speaker as they moved around his bed, and shook his head when asked to do so. In one instance, when researchers moved up close to his face, his eyes grew wide, possibly a sign that his startle-and-fear response was activated. Even more personally, when a caregiver played music that had been sentimental to him, he smiled and cried.

The French researchers, led by surgeon Jacques Luauté, implanted a programmable device that is currently approved for patients with epilepsy. The device was installed in the left side of the patient’s chest, and delivers gentle electrical pulses through an electrode wrapped around the vagus nerve at the neck. The patient received daily stimulation over six months, gradually increasing in pulse intensity to 1.5 mA.

When researchers analyzed the electroencephalogram (EEG) data, they noted increased connectivity and information sharing in multiple areas of the brain associated with motor skills, sensory perception, and awareness. There was a notable increase in brain waves known as theta ECG signal activity, a key marker that helps doctors determine if a patient is vegetative or minimally conscious.

One key area, the parieto-temporal-occipital border, is “a region labelled as a hot-zone for conscious awareness,” the researchers write. And finally, a PET scan revealed increased metabolic activity in the brain’s cortex and subcortex, which suggests an improvement in overall neural connectivity.

“Brain plasticity and brain repair are still possible even when hope seems to have vanished,” Sirigu said.

Vagus nerve stimulation may be the new frontier for helping the brain recover from damage. It has shown dramatic promise in a number of brain-related traumas or disorders. The vagus nerve, informally known as the “wandering nerve” because it travels a vast distance, from visceral organs to your brainstem, passes important electrical communications between them. It also modulates activity in the brainstem, and communicates with key areas of the brain involved in consciousness, including the thalamus, the amygdala, and the hippocampus and enhances neuronal firing in the locus coeruleus, “which leads to massive release of norepinephrine in the thalamus and hippocampus, a noradrenergic pathway important for arousal, alertness and the fight-or-flight response,” the study authorswrite.

Vagal nerve stimulation has been used to treat depression and neurological disorders, and the chronic inflammation that is the hallmark ofautoimmune diseases. Given the epidemic of traumatic brain injuries (TBI) in high-impact sports like football, VNSis being studiedas a potential therapy for people with recent injuries with the hypothesis that it will result “in increased cerebral blood flow and metabolism in the forebrain, thalamus, and reticular formation, which promotes arousal and improved consciousness, thereby improving outcome after TBI…”

While it’s too soon to say if the man’s new state of consciousness is improving his quality of life—his family has not made a statement suggesting how they feel—Sirigu feels that the treatment is better than his previous state. "It is always better to understand than not be aware of what others are doing to you or telling you,” she says. “I would prefer to be aware, in any case.”

Dr. Uzma Samadani, a neurologist and expert in traumatic brain injury research at the University of Minnesota, is among those unaffiliated researchers who found this study compelling. “I am emphatically in favor of this line of research,” she told Ars Technica.

Samadani is now conductingher own trial to test VNS in patients with brain injuries. “I believe that we do not have full understanding of the mechanisms of impaired consciousness associated with trauma but that vagus nerve stimulation appears to show promise in this isolated case report. Despite the fact that this is only one case, I am encouraged that this will provide evidence to funding boards that this is an area that needs to be considered. Our own work is currently being conducted using non-invasive VNS in moderate TBI patients, and we look forward to sharing our results in the future.”

Other researchers are not yet sold on the effects of the study, though. It’s hard to draw large conclusions from the data of only one patient, after all, according to Dr. Elizabeth Coulthard, an expert in dementia neurology at the University of Bristol. She also feels the improvements are “of questionable significance to the patient.”

Sheadded, “While it is suggested that perhaps this opens an avenue for future research, one cannot infer any clinical benefit on the basis of this one patient. Even the small change demonstrated here may not be transferable to other people in a persistent vegetative state.”

However, Sirigu believes they are at the precipice of major breakthroughs. “Our study demonstrates the therapeutic potential of vagus nerve stimulation to modulate large-scale human brain activity and alleviate disorders of consciousness,” Sirigusaid.

The study authors conclude in their paper that stimulation of the vagus nerve“helps to restore consciousness even after many years of being in a vegetative state, “thus challenging the belief that disorders of consciousness persisting after 12 months are irreversible.”

The researchers are in the planning stages for a large collaborative study to confirm the results of VNS for patients in a vegetative or minimally conscious state. Sirigu said the findings will also advance understanding of "this fascinating capacity of our mind to produce conscious experience."