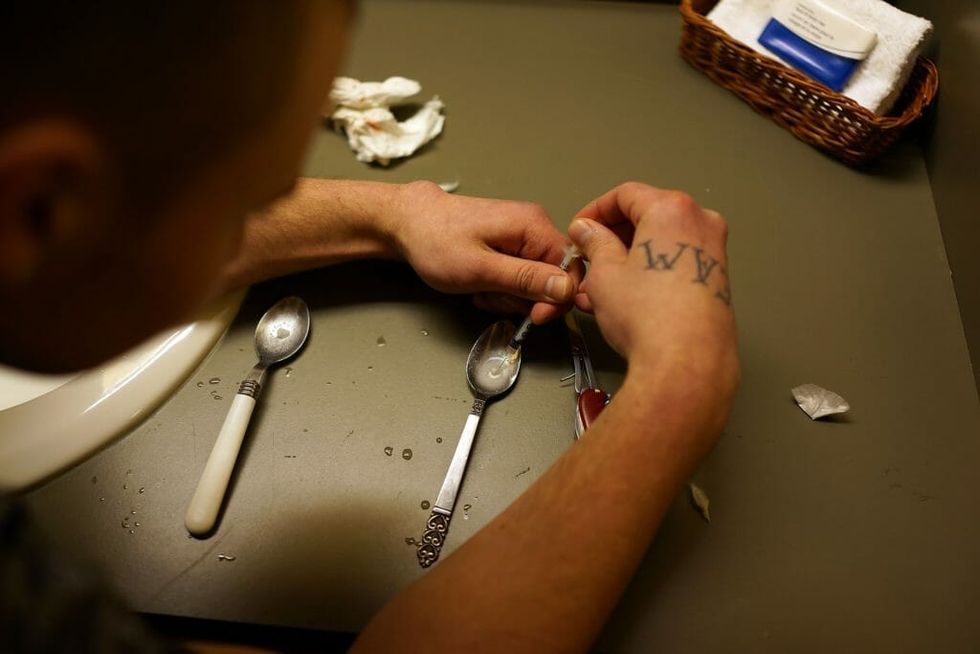 ST. JOHNSBURY, VT - FEBRUARY 06: Drugs are prepared to shoot intravenously by a user addicted to heroin on February 6, 2014 in St. Johnsbury Vermont. Vermont Governor Peter Shumlin recently devoted his entire State of the State speech to the scourge of heroin. Heroin and other opiates have begun to devastate many communities in the Northeast and Midwest leading to a surge in fatal overdoses in a number of states. As prescription painkillers, such as the synthetic opiate OxyContin, become increasingly expensive and regulated, more and more Americans are turning to heroin to fight pain or to get high. Heroin, which has experienced a surge in production in places such as Afghanistan and parts of Central America, has a relatively inexpensive street price and provides a more powerful affect on the user. New York City police are currently investigating the death of the actor Philip Seymour Hoffman who was found dead last Sunday with a needle in his arm. (Photo by Spencer Platt/Getty Images)

In 2016 alone, prescription opioids, heroin and synthetic opioids like fentanyl were responsible for more than64,000 deaths. Fentanyl alone accounted for a 600 percent increase in opioid-related deaths between 2014 and 2016. In the journey to solve this epidemic, addiction researchers may have finally stumbled upon an answer that could one day save thousands of lives and slow down the tragedy eroding parts of the country--a vaccine that might inoculate the brain against drugs like heroin and other opioids.

While heroin and its prescription cousins, like Vicodin and oxycontin, are plenty addictive themselves, drug users have been turning to synthetic versions of these drugs that “can sometimes be as much as100 times more potent than heroin,”said chemist Kim D. Janda of The Scripps Research Institute (TSRI) in California at a recent meeting of the American Chemical Society. Black market opiates are rumored to be as much as10,000 times more powerful than morphine. “Moreover, many patients [are] receiving treatment relapse," Janda added.

Despite the greater risks of overdose, these synthetics are cheaper and quicker to make and offer a greater high. But like all opioids, the longer one takes them, the more a person has to take in order to achieve the same effect until they are taking dangerously high amounts.

"There is an urgent need to discover effective medications to treat substance use disorders," Janda said.

Drug treatment programs can be effective when people recognize they have a problem, and if they have the health insurance or finances to afford them. For many people in the grip of a substance abuse disorder, however, a simpler solution would be more effective and could save lives. This is where Janda’s vaccines come in.

While we generally associate vaccines with inoculation against bacteria and viruses, Janda, who has ledseveral studies on these vaccines at TSRI, recently toldMental Floss, “There are ways to stimulate the immune response against different molecules besides bacterial pathogens or a virus.”

Janda and his team created tiny molecules known as haptens, small molecules that stimulate antibodies when they’re attached to a larger, “carrier” molecule.However, these molecules are so small the immune system doesn’t recognize them on their own, so they attached proteins called epitopes that allow antibodies produced by the immune system to bind to them.

Once the immune system has been “trained” through a series of vaccination shots, it will react to any molecular structures that look like opioids and secrete antibodies that hitch a ride on drug molecules. This prevent them from permeating the blood-brain barrier for as long aseight months.

"The antibody binds to the drug so the drug can't get to the target," Janda explained.

Janda made clear that these vaccines don’t cure a drug addiction. “You’re not going to be giving these to kids or people who don’t do drugs,” he says. “This is for people who have problems getting off the drugs, [who] have issues with abstinence, which all addicts have."

The most likely candidates for these vaccines will be people who have a history of overdoses or unsuccessful attempts to quit the drugs. Phil Skolnick, director of the Division of Therapeutics and Medical Consequences at the National Institute on Drug Abuse, which funded Janda’s work (as well as other similar research),said, “Getting [addicts] to make one good decision every day not to take opiates is a very tough thing to do.” By taking a biologic vaccine, as immune-based therapies are called, targeted to the drug they're addicted to, “an addicted—and now immunized—person would have an enduring protection. That’s one of the strongest arguments for developing biologics against drugs of abuse,” he said.

Even more crucial, this vaccine has the potential to reduce overdose deaths; the receptors in the brain that give the “pleasure” part of a drug high are the same ones that can slow breathing when a person takes a high dose of the drug. With the vaccine in a person’s system, there’s a better chance even in amounts high enough to induce overdose, a person’s breathing won’t be affected.

While the research is promising, so far these studies, while promising, have only been tested on mice and monkeys. Researchers hope to be able to take them to human clinical trials before long.

"Vaccines are meant to be used by people who want to quit taking drugs," Janda explained to Philip Ball at The Guardian.

"If you don't want to stop then nothing will help. The idea is that if they have a moment of weakness, they won't relapse and can continue with their therapy."