New U.S. & Russia Joint Space Exploration Program Is Something Out Of Science Fiction

The U.S. and Russia will collaborate on an ambitious plan to construct a space station in lunar orbit and a human colony on the Moon. 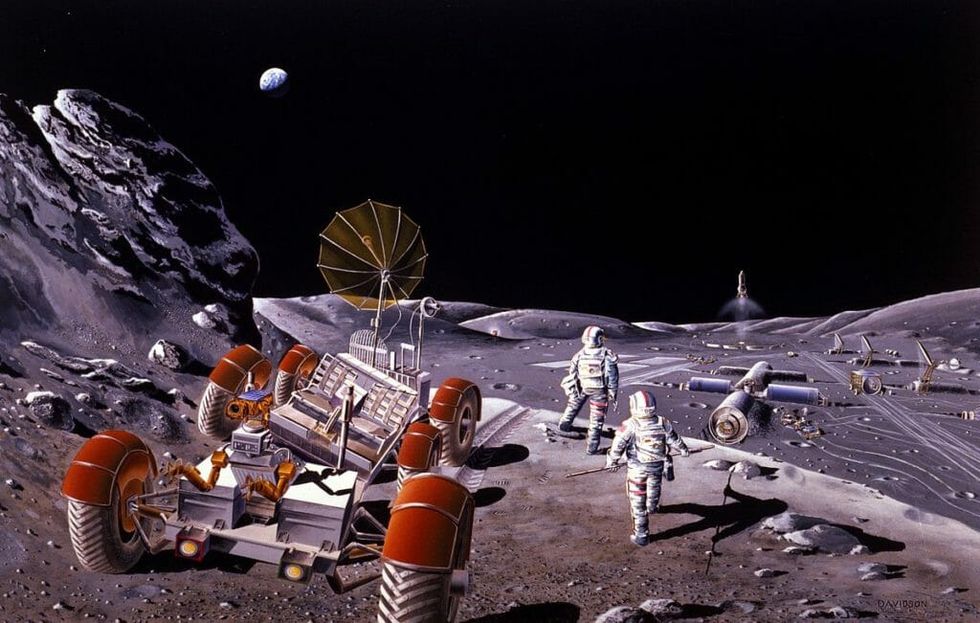 Scientific exploration and discovery know no borders and can unite people in the search for truth. Beginning with the launch of Sputnik in 1957, the fiercely competitive space race between the United States and Russia has led to some remarkable, yet crucial, cooperation. Now, the two arch-superpowers will collaborate on an ambitious plan to construct a space station in lunar orbit and a human colony on the Moon.

In September 2017, the United States and Russia signed a joint statement at the 68th International Astronautical Congress in Adelaide, Australia. The resolution promises cooperation between NASA and the Russian space agency, Roscosmos, in the construction of the Deep Space Gateway. The project, described by NASA as a “gateway to deep space and the lunar surface,” involves the multi-stage construction of a manned spaceport in lunar orbit. Such an endeavor will serve as a stepping stone to human colonization of the Moon and exploration of the solar system.

The Deep Space Gateway aims to serve as a stepping-stone to deep-space human exploration; constructing a station orbiting the Moon will enable astronauts to experience extended stays in space far from Earth. In 2015, NASA completed the design for its Space Launch System, which is scheduled for delivery in 2018.

The SLS will be the most powerful rocket ever built, and its purpose is to carry human explorers and scientific equipment as far as Mars. Standing at a towering 322 feet, the first stage of the SLS, called Exploration Mission-1, will generate an impressive 8.8 million pounds of thrust (the equivalent of 160,000 Corvette engines) upon liftoff, enabling it to carry more than three times the amount of mass than the space shuttle. Sitting atop the SLS will be the Orion spacecraft, which is the safest and most advanced manned spacecraft ever built. Initially test-launched in 2014, Orion will accompany EM-1 in a trip around the moon to test safety and critical systems, as well as return and reentry to Earth. The second SLS mission, Exploration Mission-2, will carry four astronauts past the moon.

Supplementing the American designing of the SLS and Orion will be the Russian-built Angara-5 rocket, which is intended to replace the country’s 60-year-old Proton rocket program. The Angara-5 will deliver the crucial Russian-designed docking systems to the DSG. The two nations will also cooperatively plan manned missions to the lunar surface and eventually to Mars.

Looking Toward The Future

To send humans to Mars by 2030, NASA and Roscosmos, as well as the European Space Agency and at least five other countries, plan to have astronauts living in lunar orbit by the 2020s. Having a space station in lunar orbit will save fuel and time for future manned missions to Mars and destinations into the outer solar system.

At the International Astronomical Conference, Australia and the United Arab Emirates announced plans to develop their own space programs. Australia’s involvement in space began in 1967 — one of the first nations in the world to launch a satellite. In fact, the first TV images of Neil Armstrong’s historic moonwalk were received and broadcast by a NASA tracking station in Australia. Now, the country plans to invest in its own space program, which will create an estimated 11,700 jobs and generate $4.17 billion in economic growth.

The UAE aims to send astronauts from their nation into space in the early 2020s, though they would likely fly on Russian and Chinese spacecraft. Earlier this year, The UAE also unveiled their vision of building a permanent, fully-functioning city on Mars within the next century. Mars 2117 would be a “multinational effort, which would set out to create a coalition of equals working together to fulfill a unified objective,” Mars 2117 program director Saeed Gargawi said. Creating a sustainable settlement on Mars has its sociological challenges, too, and according to Mr. Gargawi, “envisaging utopias is all very nice, but we have so far failed to define and operate a perfect society in thousands of years of modern human evolution. Is Mars a chance to restart a new kind of society? Yes, it is.” A human colony on Mars would focus on scientific research and technology, rendering Earth-based political complexities unnecessary.

A Brief History Of US-Russian Cooperation In Space

The 1972 Apollo 17 mission brought the last humans to walk on the lunar surface, and to date, no other country besides the United States has landed humans on the Moon. Because of budget cuts and political fallout from the Watergate scandal, American interest waned and lunar exploration lost its funding. Instead, resources were put into NASA launching its first space station, Skylab, in 1973.

Following the cancellation of the three remaining Apollo missions (18, 19, 20), the United States and the (former) Soviet Union embarked on their first joint space venture, the Apollo-Soyuz Test Project, in 1975. The eight-day mission involved the docking of an American Saturn V rocket, which powered the Apollo programs, with a Soviet Soyuz spacecraft, while both were in low-Earth orbit. American astronauts and Soviet cosmonauts greeted each other, toured each other’s spacecrafts, ate lunch together and performed experiments. Unfortunately, Cold War tensions in subsequent years, however, strained joint US-Soviet trips into space. Though joint space exploration took a hiatus, the US and USSR still played off each other’s successful missions, such as NASA’s Voyager and the Soviet Union’s Venera program, which successfully landed ten probes on Venus.

The Space Shuttle program was introduced in 1981 by U.S. President Ronald Reagan during the height of the Cold War. The space shuttle program flew 135 missions until it ended in 2011. Tragically, two of the shuttles, Challenger in 1986 and Columbia in 2003, exploded during take-off and reentry, killing all 14 astronauts between the two. During its 30-year life, the space shuttle program carried satellites, the Hubble Space Telescope, and 355 daring explorers from sixteen nations (49 women and 306 men).

On June 29, 1995, the first American space shuttle docked with Soviet space station Mir. From 1986-2001, Mir was the largest cooperative space mission between the United States and the Soviet Union. Having hosted 125 astronauts from 12 countries, Mir functioned as the bedrock for future international collaborative space research missions. Onboard, scientists performed biological experiments, including growing wheat in space for the first time, as well as conducting research on geophysics and human life in space. The space shuttles also carried into orbit the components for the International Space Station, which was constructed in space.

The International Space Station is the most recent manned international space endeavor, with the United States and Russia providing most of the resources and personnel. In fact, Russian Soyuz rockets are exclusively used to transport people, supplies, and equipment to the ISS. Since the Apollo program ended, low-Earth orbit is the farthest humans have ventured into the cosmos. The ISS completed its 100,000th orbit around Earth in 2016.

Launched in 1998, the ISS is the largest and most complex international space project in history. One of the most important purposes of the ISS is to study the long-term effects of humans living in space for extended periods of time. NASA’s Human Research Program, for example, studies the effects space radiation has on human physiology. Traveling beyond Earth’s magnetosphere exposes astronauts to lethal cosmic rays from the Sun. Additionally, living in the zero-gravity environment of space, or the low-gravity environments of the Moon and Mars, has negative physiological effects on the human body, including bone loss, muscle wasting and immune system suppression. The most challenging aspect of living in space, however, is human behavior, as space travel requires prolonged periods of confinement, sustaining only a handful of people, with no way to escape.

Despite more than a half-century of political and social animosity between the United States and Russia, both nations are responsible for most of humanity’s space-related technologies. Manned exploration of the solar system not only strengthens scientific partnership but also requires setting aside political differences to reach two mutual goals: scientific truth and the long-term survival of the human race.